Was saying Stephen Hawking is now 'freed from his body' ableist?

Since Stephen Hawking’s death, I’ve been seeing a lot of comments, most from people with a disability, saying that it’s offensive and ableist to describe him as now ‘free from his wheelchair’.

I wrote that he was ‘imprisoned by his body’ here on the BBS and have to admit that I wondered after I posted it if that was ableist.

I think Hawking captures our imagination because his mental faculties never dimmed regardless of what his body did.

‘imprisoned by his body’

Many people with his condition would be, but it’s really hard to say that his condition stopped him from pursuing his life goals, He certainly achieved more than most even as his condition deteriorated so it’s really hard to make the case that he specifically was imprisoned in any way. This is a person who will, without a doubt, still be remembered in a 100 years for his contributions to science, and by extension, to humanity.

So yeah, if even Steven Hawking is seen as limited in any way because he was disabled, or his condition gets described as a sort of suffering, imagine what regular people must go through.
I guess the easiest way for me to approach this is to say that it’s really down to each persons experiences, not about the category they fit, whether abled or disabled.

you’ve posited three possible wordings, one of which sits just fine. The other two sound a bit ableist, yes.

When I die DON'T say I'm "free from my wheelchair" or "better off & without pain" If you think disabled people are better off dead and with death comes a human form without disability then you expose your ableism. We are not better or free in death, that is dangerous thinking.

Getting away from the “please don’t encourage another massacre of the disabled” angle, there’s also the point that many wheelchair-mobile people justifiably hate the framing of “imprisoned by a wheelchair”. From their perspective, their chairs liberate them from dependence and immobility.

I don’t think the intent was ableist. But I do think there’s some careless wording being bandied about.

Stephen Hawking was an inspiration to so many overlapping groups of people for so many reasons. I wasn’t exactly jazzed about the comments about him being freed or really anything about the hypothetical afterlife that he, like myself, didn’t believe in. But I also recognize that a majority of those comments came from a place of appreciation for his life, so I wasn’t going to take a stand against them in those comments.

In the final analysis, my answer would be to express compassion and empathy, and try to understand the people taking issue with those words, and to understand that he was a hero to a lot of us from so many walks of life, many of whom live and thrive in ways which you might never have experienced.

Most folks aren’t out to pick a fight. They just want an equal opportunity to appreciate and mourn someone they admired. Try to give them room at the wake just as you were given a little space.

Thanks but I wasn’t complaining about other people’s comments or attempting to stop them expressing their grief or anything. Was just wondering if I’d been unintentionally and thoughtlessly ableist. I think the answer is yes, although perhaps slightly less so than people expressing a wish for him to be free of his wheelchair. But that’s probably just splitting hairs. I still have much to learn.

Was saying Stephen Hawking is now ‘freed from his body’ ableist?

Perhaps only if it was generally known that Hawking wanted to be healthy and not suffer from ALS.

I can’t really say whether it’s ableist or not. Nonetheless, I do have some thoughts on the matter.

I’m rather certain that, for all of Hawking’s career, he was a staunch materialist, i.e. he was no Cartesian dualist—he was committed to the idea that only the material world exists (though discussion of simulated and parallel universes can easily be found within his body of work).

This means Hawking himself would never consider it possible to be “imprisoned by” (and therefore “freed from”) his body, because he is his body. A prison cannot be imprisoned within itself.

Indeed, while some parts of his body made many aspects of living difficult, other parts (namely, his brain), opened up whole worlds for him to explore and share

So, I believe, Hawking would argue that saying he was “imprisoned by his body” is just nonsensical.

Does that help inform whether the statement is ableist? I’m not sure.

This article may give some insight into how Hawking viewed his disability.

Eric Dorsey, a 62-year-old engineer in Palo Alto, was watching TV Tuesday night when he started getting texts that Stephen Hawking had died. He turned on the news and saw clips of the famed physicist speaking in his iconic android voice - the voice...

I think Hawking found great joy in lecturing and doing research into cosmology, and his death “freed” him from that experience.

I can only relate to his wheelchair as someone who doesn’t use a wheelchair.

I read some posts by people in wheelchair about this. Basically they said his chair was freedom.

Have fun out there among the stars. https://t.co/S285MTwGtp

I would say yes, specially because, as @ugh said, he did not believe in an afterlife. In his own words:

“I regard the brain as a computer which will stop working when its components fail,” he told the Guardian. “There is no heaven or afterlife for broken down computers; that is a fairy story for people afraid of the dark.”

Being dead is not better than having a disability.

“There is no heaven or afterlife for broken down computers; that is a fairy story for people afraid of the dark.”

“I am damned if I’m going to die before I have unravelled more of the universe,” 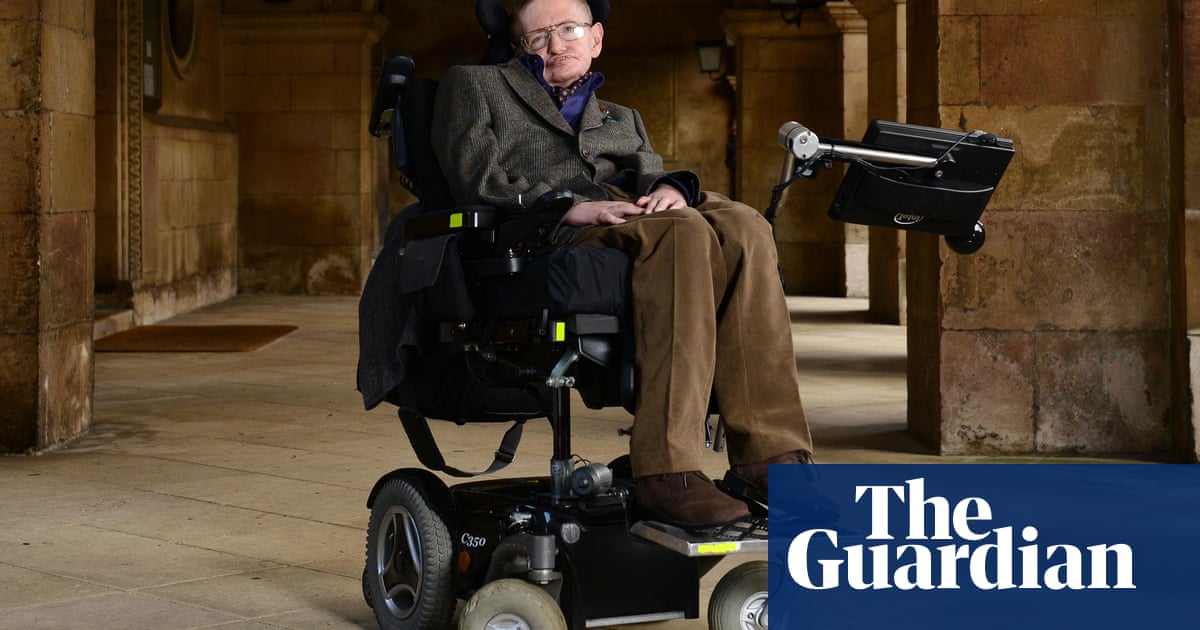 Being dead is not better than having a disability.

In Hawking’s case, he pretty clearly wished to live as long as possible he could keep working. But there’s no general principle to be drawn from that; “better” is a value judgement, it’s subjective. No human’s values are universal.

I Am Disabled and People Tell Me On a Regular Basis That They Would Rather Die...

Loss of dignity is another reason people seek assisted suicide. Loss of dignity is dehumanizing and horrible, but the answer is to work to ensure that everybody is enabled to have dignity. It’s not acceptable to simply agree to kill those who don’t.

Feeling like a burden is another. But a society that diminishes our lives to the point where strangers tell us we’d be better off dead (because, yes, some are that direct) is one where we are bound to feel like a burden! A world where our financial support and care are being cut to such a degree that people are losing hope entirely is not one where we can feel dignified.

Pretending his disease wasn’t burdensome and that he’s soooooo stronnggggg is ableist IMHO. It’s perfectly valid to note he had mobility issues and that if we imagine there’s an afterlife he’s probably more mobile there.