As a drummer, I experience this sort of thing every day. I hear/see the pattern in most things. From turn signals, wiper blades, ticking clocks, etc. No matter the speed or how off they are, two or more repeating things will eventually sync. I feel the anticipation building and when it happens it clicks something in my mind. But until it happens, all is anxiety.

edit to add: this is not the accidental synchronization that happens in every day life. This is forced by placing all the metronomes on the same speed and on a platform which is allowed to sway from the force exerted by the metronomes collectively thereby causing them to sync.

The magic of physics.

I refer to physics as ‘repeatable magic’ all the time. Because it pretty much is so. 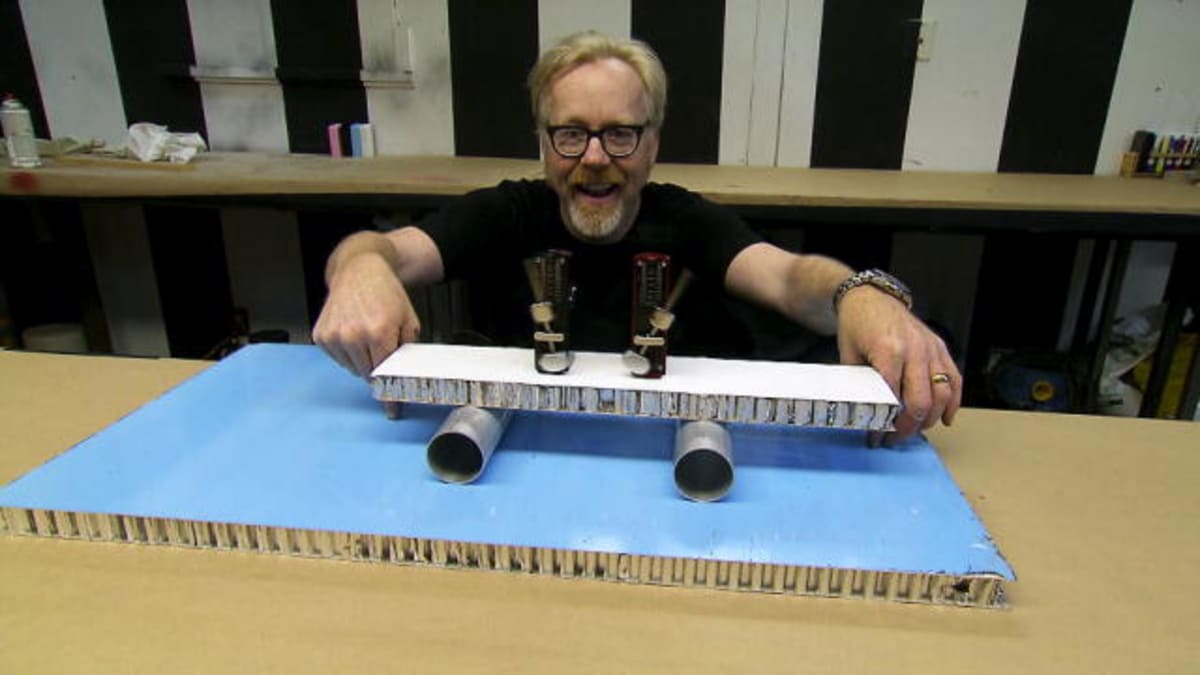 It looks so easy in those viral videos, but will multiple metronomes REALLY synchronize after a while? Adam has a theory; see what you think.

Reminds me of the Republican party as they fall into goose lock step with Drumpf.

The video shows that transfer of force can align the metronomes over time.

And I thought Force Push was a lame Jedi power…

The magic of physics.

In case people don’t know, this is actually due to Einstein’s Special Theory of Relativity, and is one of the classic tests of it. Each metronome is beating out seconds, but those seconds are only valid in each metronome’s own inertial frame of reference. But because they all have exactly zero acceleration with respect to each other, they must all share an inertial frame. The Theory of Relativity explains how different things in the same inertial frame of reference must share the same “flow of time,” but clearly this is in conflict with the out-of-sync metronomes. Therefore they must slowly merge timeframes, but what’s super interesting is that each metronome believes — totally correctly! — that it’s own time isn’t changing, and that all the other metronomes are warping time (stretching it or shrinking it) to match with it. And again each metronome is totally correct about that! (Head explosion.) We, from an external non-inertial reference frame (but still the same frame from a space-time perspective!) can clearly observe all the metronomes slowly coming to synchronization. The slow, observable time it takes for this to happen is called the “Shapiro delay,” or the time delay effect.

Came here to say the exact same thing but decided to say: “I thought this phenomenon was well-known, maybe even taught in high-school physics class” instead.

I think you’re reading too much into the “as a drummer part”. Most people notice this, we’re pattern seeking animals. Mentally we want things to happen in patterns, want to find the ways they match up, notice those things, and are actively disturbed when they don’t. If being a musicican has an effect its that you’re more likely to be looking for those things in terms of rhythm and meter, and have the language and technical know how to describe them in musical terms. Just like being a guy who’s worked in video and audio I know you can manipulate these things to cause all sorts of subtle effects in the viewer/listener. Leave it naturalistic and balanced and you create the sense of a actual space. Bring that clock to the fore front and you create a feeling of tension and emptiness. Sync that clock up with something else and you can create an almost musical, montage effect. Alter the sound track to drop a few ticks here and there, or alter their timing to something less regular and you create a feeling of disquiet and unreality. OR sync it up with something else but make sure it doesn’t equate to a regular, pleasant, musical meter and you get the same thing a different way.

But like I said most people notice these things, and I don’t fool myself about that because I’m more apt to think about it in different terms than “that’s weird/cool”.

It’s always fun to watch Adam get excited about science-magic.

On the science-magic topic, Derek over at Veritasium (Can’t recommend strongly enough) also has a gem.

It’s how the Republican party operates!

Reminds me of the Republican party as they fall into goose lock step with Drumpf.

Not only that, but:

Ecclesiastes 1:9 and all that.

I think you’re reading too much into the “as a drummer part”.

Maybe. Maybe not. Do most people make all their movements be divisible to the sound of a clock tick or other audible/visible repeating pattern? Are you unable unconsciously to walk out of step to the music you are listening to? Does randomness like water dripping cause you to construct complex patterns in order to make it fit? These are common problems with people who immerse themselves in the world of percussion but traits I’ve rarely, if ever, noticed in someone who hasn’t. Don’t underestimate the power of years of training to count complex patterns and polyrhythms at any tempo.

this is actually due to Einstein’s Special Theory of Relativity

Um, no, this is easily explained classically by the coupling of the table. That is, each metronome exerts an oscillating sideways force on the table and collectively this results in tiny motions of the table which exert force back on the metronomes. It is a system known as coupled harmonic oscillators.

You’l notice the “table” looks to be made of foam. This would be to reduce its mass, allowing more motion allowing the synchronization time to be shorter (a big, heavy table would result in much lower coupling constant would inversely result in a much longer coupling time.

The pink one in the second row on the right hand side is my hero. Notice how, when it eventually bows to the pressure of conformism, it does so with an air of confident rebelliousness, as if to say this act is nothing more than the donning of a mask to allow me to subvert the system from within.

Don’t underestimate the power of years of training to count complex patterns and polyrhythms at any tempo.

Of course the real curse begins when you stop counting polyrhythms, and just feel them.

Exactly my thought as well…scary stuff to contemplate even as we watch them starting to fall in step like the good little non-thinking machines they are.

It occurs to me that the Millennium Bridge phenomenon in London might be an appropriate analogy.