We stole those French words right and proper! 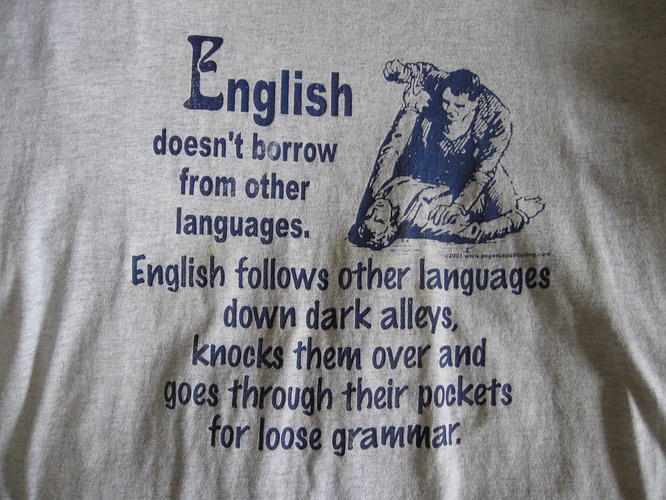 (And yes, there evidently a Yiddish word for “disappointed”: entoisht.)

This made me smile.

Yiddish sometimes feels like the equivalent of somebody writing German without having learned the language, and another person reading what the first has written with a thick Slavic accent.

Not sure, but in my region of the US, “bolognese” is the default - and left unsaid.

Yiddish sometimes feels like the equivalent of somebody writing German without having learned the language, and another person reading what the first has written with a thick Slavic accent.

After years of exposure to Yiddish and Pennsylvania Dutch, this explains why I struggle to develop an ear for German…

I recently learned about a Polish phrase that translates as “not my circus, not my monkey.” I use this now with mad abandon.

Sounds fun, but I refuse to watch Asian Boss videos after that bullshit one they filmed here in Taiwan where they mostly interviewed regular people on the street, but couldn’t find anyone with a pro-Chinese viewpoint (of course not, they figure in the low single-digit percentages of the population and are almost entirely over 70 years old). So of course they went and found a pro-China YouTuber, paid him, and pretended he was someone they just bumped into in the street. Everyone else was a genuine bystander, so they appeared less knowledgeable, unprepared and not used to being on camera, whereas the authoritarian bootlicker came off as a pro since he was a hired stooge. Same false-balance garbage that results in every climate scientist on TV having to share airtime with at least one reality-denying nutball. Wankers.

That said, for me (though I am not quite a native speaker of Japanese), it is very difficult to pronounce words in Korean or hear the difference between similar sounds.

Japanese words used in American English:
“Honcho”: “Boss”–my maternal grandfather was called that by his factory co-workers. Also the name of some Cowboy Western movie.
“Skosh”: “Little bit”–heard that in a Levis commercial.
“Hunky dory”: From a street in Yokohama known to be “fun” for sailors.
“Sougee”: “To clean up”–used by sailors to refer to cleaning beyond the regular sweeping and swabbing.
Of course, we now use anime and manga to differentiate from regular cartoons and comics.

Just like how American Blues records were brought to Liverpool, England, we sailors have a knack for bringing cool shit home from the rest of the world. You should see my pantry! Recently ran out of the Persian saffron I scored in Jebel Ali several years ago.

Google translate re-translates this to “nie mój cyrk, nie moja małpa”, but I have had ridiculous experiences in the past translating hither and wither.

My favourite was translating the lyrics of a RHCP song to French, then to Korean, and then to German. Hilarity ensued.

The number of memes with that exact text and a domain ending in .pl would indicate to me that you’ve got the correct phrase. 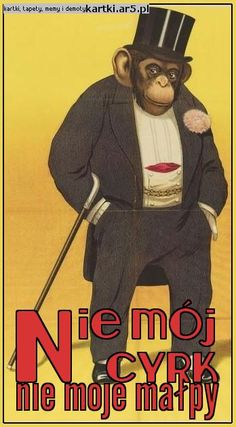