I think the point was a reaction to the word “child” as pandering to a false image of Michael Brown as some sort of frail innocent.

At over 6ft and over 200#, even if you’re not 18 yet, you’re certainly a more physically imposing figure than many adult males will ever be.

That being said, regardless of size or age, nobody should be subject to injustice by those who are tasked to preserve it. It’s too bad that all the information seems to come from one of two camps, the “my innocent little baby” camp or the “drugged up giant potential cop-killer” camp. Each side is so blatantly pandering to cultural tropes, and trying their damndest to manipulate facts to fit their agenda. 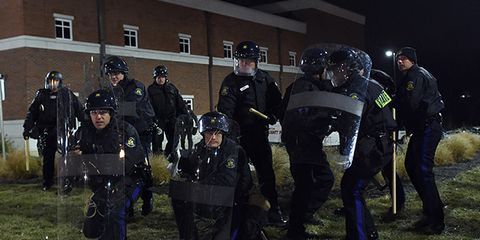 Dead Of Night: The Ferguson Decision

Police in this country have been militarized in their tactics and in their equipment, which is bad enough, but in their attitudes and their mentality as well, which is far, far worse.

Prosecutors in Ferguson Violated Our Right to Witness an Open Trial

St. Louis County prosecutor Robert McCulloch’s decision to “open up” the grand jury proceedings by including massive amounts of testimony and evidence ...

edit–i should have said feet instead of yards in the first sentence.

when i took their test about racial attitudes earlier this year i showed a slight bias towards people of color. i tend to think that the fact that my two grandsons, 11 and 14, are biracial and look african-american is responsible for this result.

I read nothing in the two links above that causes me to believe that Wilson’s life was not threatened. Brown was charging toward Wilson and the distance had closed to 8-10 feet. There is strong evidence that Brown initially had his hands inside the car attempting to take the pistol away. During the grand jury testimony, several of the witnesses provided conflicting testimony. And simply positioning one’s hands at any position other than by one’s side doesn’t mean Brown was surrendering. He had already tried taking the gun away once, and I believe that was his intention as he charged Wilson.

A jury of both African-American and white citizens heard detailed testimony about the case and declined to deliver an indictment after hearing all of the testimony. Your argument and that of others here are not strengthened by name-calling or supporting the actions of those who have chosen to destroy property of people who were not part of the police force or the grand jury.

from the new york times-- “The distance from the front wheel of the officer’s S.U.V. to Mr. Brown’s body was 153 feet, 9 inches, an investigator said.”

A jury of both African-American and white citizens heard detailed testimony about the case and declined to deliver an indictment after hearing all of the testimony. Your argument and that of others here are not strengthened by name-calling or supporting the actions of those who have chosen to destroy property of people who were not part of the police force or the grand jury.

3 african-americans and 9 whites declined to indict after the prosecutor abdicated his job and dumped the evidence before the grand jury without creating a narrative, a focus, or a set of charges that might fit the crime. no prosecutor ever approached the job of investigating the killing of a citizen by a civilian in the way mccullough did in this case.

you truly disgust me with your smug concern for property over the lives of young black men. have you not realized that each of your comments here demonstrates ever more convincingly how disposable young black men are to you?

I read nothing in the two links above that causes me to believe that Wilson’s life was not threatened.

Of course you don’t. Your mind is made up.

No, if you’re not 18 yet, you’re still a child. That’s not pandering of a false image of Brown. That’s fact. YOU are pandering to the racists’ notion that just because he was a big child, it means he was actually a man, when he was, in fact, a child.

I have a nephew who will likely be as big as Brown. He’ll be 13 in February, and his shoes are already a size 13. He’s HUGE and he’s already intimidating to even some grown ass people due to his intimidating size (he’s almost 6 foot and not even a teenager yet; he’ll probably be larger than Brown). BUT HE IS STILL A CHILD. The only thing going for him is that he’s’ white, and I’m glad of that, in a sick sort of way – he’s doing well now, but he had a rocky start when he was younger because his mother had a rocky time of it after he was born; he is a prime candidate for getting into trouble in his mid to late teens. What if he was as big as he was and also black? Would you consider it not factual that he’s still a child because he’ll be 6 feet tall by the time he’s 14 and the size of a linebacker? Is he suddenly no longer a child merely because of his size? That’s bullocks.

Size doesn’t mean a child is not a child. The only reason people want to push back on the FACT that Brown was a child is because he was black.

And I don’t understand how the distance from Michael Brown to the inside of the police car is relevant. Wilson was no longer in the car. The car was not threatened; Wilson was.

. . . or supporting the actions of those who have chosen to destroy property of people who were not part of the police force or the grand jury.

Brown was charging toward Wilson and the distance had closed to 8-10 feet.

aren’t those your words?

I beg YOUR pardon sir, but you’ve completely missed the fucking point.

I do not disagree one bit that this officer was a total ass, and that his description of the situation, and the “evidence” presented to the grand jury also seem deliberately one sided and manipulative.

It’s entirely possible to be against the manipulation of facts and evidence on both sides of the argument.

Actually, he was 18, so it’s not pandering at all. He was, at the time of the shooting, legally not a child, he was an adult.

That being said, I disagree on the basic point. Even if you’re an unusually large 12 year old as your nephew apparently is, intentionally manipulating media descriptions of him to pander to an image of a frail small child is not honest. A person who is not mentally developmentally an adult, yes. A person who doesn’t deserve to be subjected to an injustice, regardless of size, definitely yes.

People have a problem with the descriptions of Brown because attempting to infantilize him is fundamentally dishonest. He was apparently a quite large young man. Neither his size, nor his age really, should have any bearing on the fundamental argument which is that his life was ended at the hands of someone tasked to “protect and serve” under what appears to be very suspicious circumstances that the responsible officer will apparently never see a criminal trial for.

which is the point of my reply, that there are “camps” other than the two you described in your comment.

regardless of size or age, nobody should be subject to injustice by those who are tasked to preserve it. It’s too bad that all the information seems to come from one of two camps, the “my innocent little baby” camp or the “drugged up giant potential cop-killer” camp. Each side is so blatantly pandering to cultural tropes, and trying their damndest to manipulate facts to fit their agenda.

ah, so this camp then…

My comment/concern boils down to the fact that the media is being dominated by the “innocent baby angel” or “giant evil thug” camp (much like occurred during the Trayvon Martin issue). Neither of these are likely to be accurate, and both are attempts to distract from the actual facts of the case. I don’t care if the guy was 35, 350#, and 7’ tall, it certainly seems like there were gross injustices perpetrated upon him by Wilson. Age, size, and strongarm robbery of a convenience store are all irrelevant data.

I’m sure there are as many “camps” as there are reasonable thinking people who are considering the facts presented. In the mainstream media, the “camps” presented seem pandering, divisive, and very limited in scope.

10 out of 40 posts in this thread - including this one, and as of this writing - are about two words in Jay Smooth’s brilliant, passionate, eloquent video.

There is so much rich, deep meaning in what he says, yet many of us have allowed ourselves to be side-tracked by those two words.

The only way we can stop arguing about those two words is to JUST STOP TALKING ABOUT THEM.

Don’t engage anymore with people who want to be “right” about those two words. Just ignore that part of what they say, even if it lets them have the last word on the subject.

Please watch the video again, and this time make a mental substitution for those two words. Put in whatever you thought he should have said, but dammitohell, LISTEN to the whole of his message.

Thank you for saying this.

One thing - it’s not even getting to be a year in between these fucking travesties of justice.

http://countercurrentnews.com/2014/11/aiyana-stanley-jones/ There was even a film crew on hand to film for a reality show about murder investigations. Weekley says that another SWAT member had thrown a flash-bang grenade, which temporarily blinded him. That’s when he fired the shot that killed Aiyana who was asleep on the couch in the front room of the house. Early in October, Wayne County Circuit Court Judge Cynthia Gray Hathaway granted a motion which Weekley’s attorney had filed, arguin…