The problems with AR demos is that it doesn’t really give a sense of what the actual experience is like. Like the Holo Lens where the demo was really amazing, but the actual AR part is fairly limited in the glasses. It sounds good and some of the reviews look promising, but I want to hear from some non techies.

I like the fact that the guy is not hiding his game gut.

I attended Pax West this year and found the Tilt Five team hidden away in a small booth in the Table Top games hall.

Honestly I was blown away with how beautiful and sharp the entire AR image looked. Now the demos were fairly basic but it felt intuitive and were a lot of good examples of what could be done.

I am really hoping a developer would pick it up and put together an AR systems that projects Mini figures and battle terrain for D&D campaigns. I was drooling at the idea of being able to play across the world with different players all seeing the same battle mat, manipulating their virtual mini’s and seeing the attack and spell animations.

How well will those glasses work over the top of corrective glasses? Nobody in the pitch video seems to be already wearing glasses.

My big issue with the PSVR headset (which is obviously far bulkier than these prototype glasses, and VR instead of AR) is getting it to fit comfortably with my glasses, making it impossible to play for more than 20 minutes or so at a time.

They do address it somewhere. I noticed that as a newfound glass-wearer myself. It fits over standard prescription lenses. I think that accounts for a bit of the bulky look (even though it still seems way smaller than any VR headset).

ETA: If you look at the video @chrisbachmann added, you can see the guy is wearing the glass over his own glasses.

Knowing what those through-the-lens demos can look like, this looked really good to me.
How did you find field of vision?

Hololens 1 disappointed me by having a fairly narrow field but I get why.

I’m making sure you know that Tilt Five are in fact partnered with Fantasy Grounds, the official online tabletop app for, among others, D&D. https://www.kickstarter.com/projects/tiltfive/holographic-tabletop-gaming
Most of the KS video and their stills on the campaign page are occupied with a 3D animated RPG map system. I think it’s just a Unity mockup, though it does bear some interface similarities to old shots of Tabletop Connect, the one-head 3D tabletop that Fantasy Grounds bought and has been sitting on for a couple years while they retool into Unity. It could be some kind of alpha of the real thing. Regardless of whether the video used Fantasy Grounds software or not, the intent to have a 3D AR RPG tool has been the closest thing to a promise about software since Tilt Five rose again.

IMO this is currently the best available non-technical consumer experience video. Hope it might meet your needs. https://www.youtube.com/watch?v=HxpkTrvAqqU&t=6m30s

Interesting thing about projected AR, under some odd circumstances (either true pitch darkness or peeking past their ear) you can actually see someone else’s image and therefore visualize the FOV.
It’s been a looong time since I had all these specs in my head, but this ancient, ancient 480p per eye prototype I believe had 70 degrees FOV. https://www.youtube.com/watch?v=M4ll6RqZwUM&t=4m57s
These glasses are the early developer tier of CastAR, which I believe had 90 degrees advertised FOV, roughly comparable to Tilt Five. With a ten-foot diameter sphere and a five-foot-something guy, his head should be in the center and the surface should be 4-5 feet out. https://www.youtube.com/watch?v=TSWNpH2WdFY&t=45s
This rundown of one of the last CastAR generations shown before they ran out of money has several shoulder-surfing shots. You can see the top edge of the FOV a lot, but I don’t think you ever see him run out of horizontal FOV - which in itself is informative. There are also clear shots on the monitor of what the projectors are showing. (I’m too new to be allowed to link three things) v=A4TAppwUMWU&t=45s

Editing because BoingBoing limits new users’ number of replies, we’ll see if @hngr gets notified by mentions in edits. I don’t think Ellsworth’s reply addresses his accusation directly enough. The May Tilt Five video’s legit. You can’t see projected AR either off the retro material, or off-axis; you can see it outside the glasses. Two of the three videos here are examples of seeing (a faint ghost of) the projection outside the glasses by being near enough the axis.
So what are the big surfaces for, if they’re not needed to see the image? They use polarization to stop you from seeing the wrong image; crosstalk. There’s a bell-curve of brightness projected on your face around the axis from the projector to each pixel. Just like some light spills out to the side of a user’s head, some goes in the other direction to the wrong eye. I still can’t post more videos, but check out Youtube video nQRl-Wq1yR8 from 35 seconds and watch the balloon outside the glasses to see the ghosting. If you were looking at it with two eyes instead of one video camera, there would be a ghost on both sides of everything. Usable, but sorta crappy. Nobody’d buy it. Thus, the glasses.

Edit: the creators responded, the GAME BOARD is a retro-reflector that reflects back images projected from your AR goggles.

You actually saw through the actual AR glasses?

The “peer through the glasses” demo video (second video on the Kickstarter), made me suspicious of vaporware. You can see that there’s an image OUTSIDE the glasses, as if the images were cast via projector onto the tabletop. There should be NO image outside the outline of the glasses, especially if the glasses are nothing but a mirror for the screens above it. 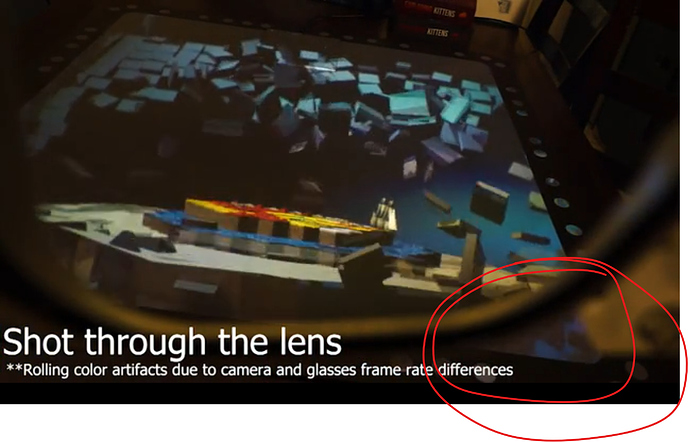 If there are working prototypes they SERIOUSLY need to reshoot the second video, but even uploading a video saying “shot through the lens” is a SERIOUS blow to their credibility. How can we trust them not to lie about anything else?

It might be worth asking about this on the KS page. The “through the lens” view could just be a composite for illustrative purposes, like the other stuff. If so, they should be more upfront about it.

Hey guys.
I think you may misunderstand how our system works and it’s understandable you made this mistake. The gameboard is part of the optics(retro-reflector) and the glasses do project to the game board. The retro-reflector is a special film that bounces the light directly back to it’s original source(the glasses).

What you’re seeing is the spill off the projector because the camera lens is large and can’t fit all the way inside the glasses. The camera is was sitting on a tripod behind that clamp and bracket holding the arm. You can also see the bracket in your screen capture.

The left picture is with the camera pulled far behind the glasses lens. Our projectors are 110degree field of view so the projection will be much wider than the frames when the camera is pulled back.

Thousands of people have used the glasses at PAX, XOXO, and Gencon. The video is legit.

Oh! So the image is being projected onto the retroreflector board, bounced back at 180 degrees and seen through polarized glasses?? That’s brilliant! That should be explained in the initial intro video. We’ve all been burned so much with futuristic display projects that were just someone tricking us with After Effects or with tracked live projections.

This is a second whack at the concept behind CastAR (which was also Jerri). I backed that project because I believed in the concept, and I still do. When that project started to go in an unexpected direction, they offered refunds to the backers.

Even though the project failed, she did good by me, and I’d be happy to back this. It only comes down to how my finances look before the close of the Kickstarter campaign.

Go back up and look at the video @chrisbachmann shared from the earlier version. You can actually see some projection happening on that demo too that is consistent with the look of a projected image you are seeing outside the frame.

Can’t lie that I’m not excited to see this.

My money-thin student budget is trying to figure out how to get kit money together so I can get in on this. This is a type of product I am hoping to work with after graduation and I can’t think of anything else quite like it.