That was great fun. I wish my mom had lived to see it. She moved to L.A. from St Louis in 1948, when she was all of nineteen. I enjoyed showing her L.A. Noire on my Xbox to see if it looked like she remembered L.A. from back then. She loved it.

The cross walks, at least, are an improvement, but the only pedestrians shown were in the old footage.

I only saw one building in common between the two takes. It’s incredible how little has survived from then.

That’s all I could notice as well, grand old buildings seemed to have been razed and replaced with mostly depressing modern constructions, with a few exceptions. I thought the local architecture had much more appealing character on display in the 1940s, even with the street lights… Though the trees seem larger and more established in some spots for the modern era, for what it’s worth.

Yeah, it’s kinda too bad they had to follow the path of the original film, so all I could identify was City Hall. Going past the top of Bunker Hill made me wish the path had gone past Angel’s Flight at the bottom of the hill, if only to see how it had been moved half a block.

I wish someone could find more of this kind of historical L.A. driving footage. It tickles me how much it looks like the plates we use to fake driving scenes with actors in movies and TV shows. We use those same straight back and 3/4 angles.

Huh. It seems like at one time people lived in Los Angeles.

One thing that was striking was all the apartment buildings that were torn down to make way for commercial structures. Eugh.

First, this driving tour only covers a tiny, very focused area: the roughly 10 block area called “Bunker HIll” that got turned into skyscrapers, Disney Hall, the Colburn School, the Museum Of Contemporary Art, and the Broad. A big improvement over the building lapsing into dis-repair.

Second, the 40’s footage was much uglier on the key LA metric: SMOG.

Compare the clips at 0:33, 1:10 and 2:52. That background “graininess” in the 1940s clip isn’t film stock, it’s smog. In the current clip, you can see buildings far away becuase the air itself is no long visible.

Remember the old Woody Allen joke: “He’s from LA. He doesn’t trust air he can’t see” ? Yeah, that joke made sense when the first clip was made, but I had to explain it to my kids.

The lack of people in the modern scene is an artifact of the tiny area sampled. Just three blocks down the hill from one of those shots is Grand Central Market, which teems with people throughout the day.

Downtown LA is now full of pedestrians – just drop by The Last Bookstore for a great example – just not on Bunker Hill.

Looking at these two clips, the modern Downtown LA is a much better place.

Nostalgia… it just ain’t what is used to be!

Another striking thing is how much cleaner the air is now. Thanks, LBJ! 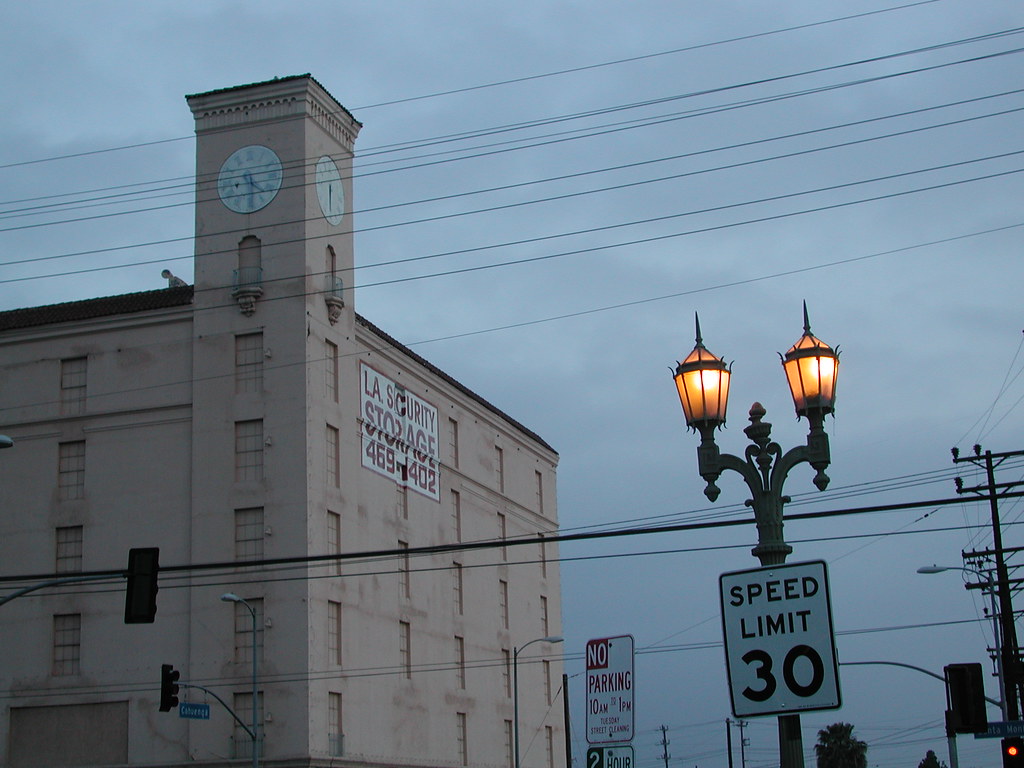 Some of those old lamp posts are still around 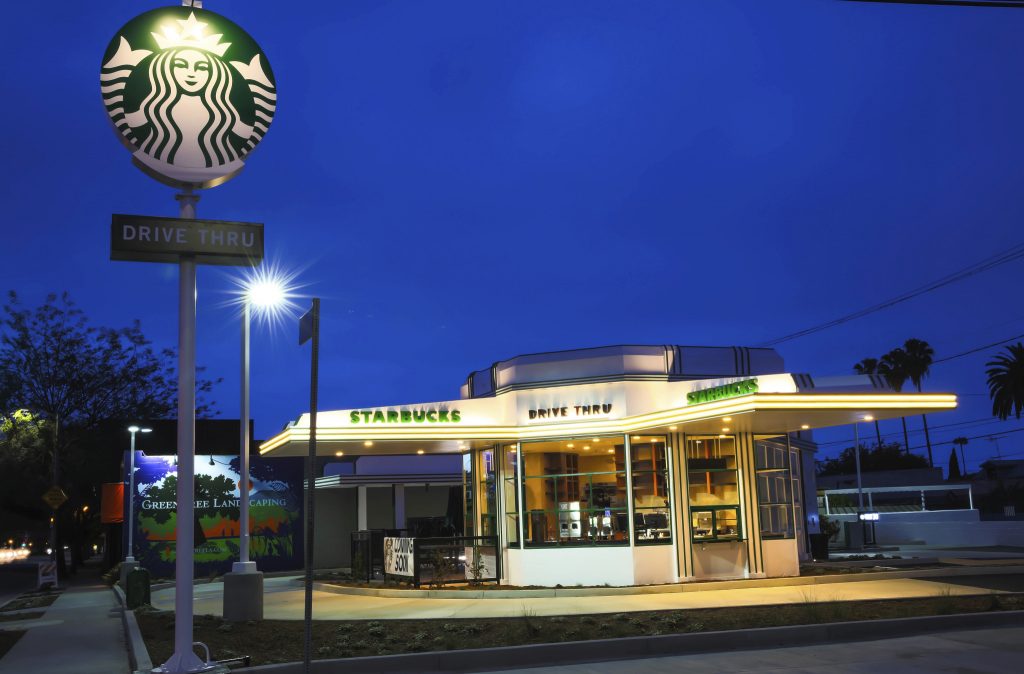 Highland and Willoughby is now a much nicer place

There’s even an old gas station

the roughly 10 block area called “Bunker HIll” that got turned into skyscrapers, Disney Hall, the Colburn School, the Museum Of Contemporary Art, and the Broad. A big improvement over the building lapsing into dis-repair.

Yeah, my mom used to live at the top of Bunker Hill; she used Angel’s Flight every day. The top of the Hill is very different these days.

I enjoyed showing her L.A. Noire on my Xbox to see if it looked like she remembered L.A. from back then.

I remember watching videos comparing LA Noire to LA at the time and the resemblance was uncanny. They really went all out with the production of that game (so much so that it essentially bankrupted the studio). Shame it was kind of a meh game.

I really liked the game, though it definitely had some issues. Mislabeling the interrogation options as “truth,” “doubt,” or “lie” instead of the originally intended “coax,” “force,” or “lie” really screwed with people’s heads. I do wish they’d make another one.

At one point in the game I drove over to Hollywood and Highland to see if the old apartment building I lived in back in 1991 (before they built the huge Hollywood & Highland mall complex) was in the game. I was tickled to find that Orchid Avenue still went through to Hollywood Boulevard, and the Chinese Theater looked great, but the 1920s-vintage apartment building I lived in was just some boring tract house.

I guess they couldn’t identify and replicate every single building from 1947. But still. I was disappoint.

Those interrogations, oh man. That’s what I remember being frustrating. Cole would just go off on the suspect sometimes and it felt really weird. I do wish they would make another one, though.

To go completely off topic, here’s a blooper reel (done in game):

Cole would just go off on the suspect sometimes and it felt really weird.

Yep. That’s when according to the game programming and actual actor’s script, Cole is supposed to be using force rather than trying to coax out the truth… it’s the “bad cop” side to coax’s “good cop.”

But since the UI identified that option as “doubt” it just meant Cole would go off like a psycho when you were just expecting him to call someone’s bluff.

Very interesting and that makes so much sense. “Coax”, “force”, and “lie” seem so much more appropriate when compared to “truth”, “doubt”, and “lie”. I wonder why they changed it.

Brendan McNamara had this to say:

“It’s funny. A lot of people say Aaron turns into a psycho,” he said. "When we originally wrote the game the questions you asked were coax, force and lie. It was actually force because it was a more aggressive answer. That’s the way we recorded it.

“But when the game came out it was truth, doubt or lie. Everyone always says Aaron on the second question is a psycho. So that’s not his fault.”

I’m a car freak despite all their environmental damage. Without doubt modern cars/transportation of all kinds are far superior today. Safety, economy, comfort and convenience is all vastly improved. What the old cars had going for them though was beauty. The shape, big generous curves accented with chrome to please the eye. I love those old, slow beasts, coupes, sedans, town cars, all built by people, designed by humans like big old rolling sculptures. The same for the buildings too, they looked like someplace inviting and interesting. They seemed warm and welcoming as opposed to glass slabs that don’t at all look like someplace I’d want to go into for shelter or business. Guess I’m not a good judge of city buildings though since I’ve never lived in a city or town. If I had to live in a city though I’d like to take a time warp back into the 30’s and 40’s though. Great fun to see the side by side , thanks David

What the old cars had going for them though was beauty. The shape, big generous curves accented with chrome to please the eye. I love those old, slow beasts, coupes, sedans, town cars, all built by people, designed by humans like big old rolling sculptures.

I agree wholeheartedly. And that reminds me of another great thing about L.A. Noire: the best part of the game is just driving around L.A. in these great old cars, that sound and drive and handle and stop exactly like they did in the 40s. I mean, they’re loud and floaty and they certainly don’t turn on a dime, and the trucks in particular are slow and noisy, and it all feels so perfect.

Plus the gasoline in those days was leaded.