Ways to use a Magic-Network?

The basic idea is world goes to war. World gets blown down to standard fantasy pre industrial scavenging from what came before. World is now at a sort of steampunk Victorian sort of technology with radio being a thing and talk of trying to do the same with images.

And then someone figures out how to get a segment of the old world net to do something. Since new uses are not computer driven and the infrastructure is not the same it’s more ‘look at what the old networking can do that is reproduceable and lay cable between new settlements.’

Ideas:
Necromancy/the use of spirits is somehow important. Does not ‘hurt’ the intangibles but they are needed for the !agicsl end of things. Necromancy is illegal. !at have druids try stepping up to the task.

Pixies are artificial creatures that have existed because of the war. Those that are trained can use their magic to enter this new network with roughly a large messenger/grocery bag’s worth of material and exit at another end.

Computers are not yet a thing. People who study the ruins or deal in artifacts would know of them but the closest that exist are electromechanical rtty machines that can display sent and transmitted text on a specislly made quartz screen (magic.) Another close analogue are typewriter/word processors. Even these are ungodly expensive and are more business/library/government than home use.

So while I am kinda loathe to go with crystal balls what kind of interface that’s cheap/easy for non+technical to use? Mind you pixies do reproduce and they pick up on tasks easy if they decide they like you. So house/personal pixie with a specialty mirror as primary interface and possibly an interface ring when the mirror will respond to voice? Like your work desk in a fairie ring or pentacle.

Possible uses? I’m kinda thinking back to BBS/Usenet when things were a lot more local and access more limited. I could see local bullitens being a thing. Ditto news and classifieds. Eventially discussion groups.

Security would be needed so people can’t just fly s bomb in. Or send a swarm through to rob your home blind.

All this as a minor ‘hey the world is progressing’ bit in the bigger setting.

I have read the amber chronicola and the rivern series. So a little bit of stealing from the! For some of the idea is inevitable, but I figure it seems interesting. Would like people to spitball at me so I can either dig for details or plot ideas.

?? Google leads me to “Architects of the Grand Design” - is this it?

‘look at what the old networking can do that is reproduceable and lay cable between new settlements.’

Decide whether you want cables, line-of-sight, or other interconnection method. The current Internet was made possible by the (now deprecated) Long Line system that relied heavily on microwave relay towers. The resources to lay long distance cables are very hard to get before they are already demonstrated to be profitably useful, so personally I’d go with line of sight or ground-following (or ley lines, or river courses, or railroad tracks).

So while I am kinda loathe to go with crystal balls what kind of interface that’s cheap/easy for non+technical to use?

Scrying interfaces are legion; bowls of water, mirrors, thrown objects like sticks, stones or tiles, and of course there’s always haruspicy. “Dammit, George, I told you to get a pack of double-A chickens at the market, I hate using squirrel livers!” 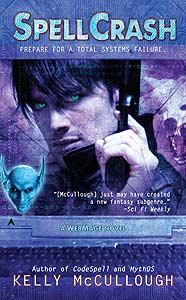 WebMage:  Even magic has to keep up with the times. Ravirn is not your average computer geek. A child of the Fates– literally– he’s a hacker extraordinaire who can zero in on the …

Also been reading ‘where wizards stay up late’ to get a feel of how ARPANET was able to happen.

Appreciate the input since o the one hand I want this interesting feeling. On the other I don’t want novelty for its own sake if it makes an end result that’s end user hostile.

Roger Zelazny supposedly used to write short episodes of characters’ lives from before or after the story, and explanations and descriptions of background elements (such as the magic/tech you’re talking about) and then destroy them after the main story was written. To get the fractal complexity of real people, who always have more to them than you can see, always just glimpsed by inexplicable but consistent signals, and to restrict descriptive elements of the story to active events - a la “Don’t tell us that the old lady screamed. Bring her on and let her scream.”

I’m not sure how I got to the above paragraph… I wanted to say “don’t work too hard on the details, stories that spend lots of time explaining the placement of nuts and bolts may be fun to craft, but they’re usually boring to read”.   The Hobbit is more fun than the Silmarillion.

Since I am not a successful author (well, except in the limited sense of code authorship) my advice should probably not be given a lot of credence. But it’s worth every cent you paid for it!

You kinda hit on why Twine interests me. Instead of telling a story ai can tell every story I can think of the starting events could put in motion. I could have a passing reference that when clicked shows a short sstorybabout an event.

Of course either ‘organically’ pantsed or meticulously planned approaches will be horribly time consuming and a nightmare to edit.