well, I guess it’s better than putting the dingdong in the ram and lama, which is why that song never made it very big.

I have no idea what to do with this.

The name “grotesco” should be comprehensible in English too. It’s was a comedy series by a Swedish group that often went for the absurd or offensive.

So…is the blackface supposed to be part of the joke?

It’s Sweden. I think they literally don’t have many black actors around.
So, to portray a U.S. show they had to make-up one (?).

Also, lots of other countries just don’t know the shitty ‘blackface’ history of the U.S.

In fairness to the Swedish writers, this is pretty much what most American television sounds like to me, and I grew up here!

Oh no. No no. That’s not black face. His face is just black because he goes down the chimneys. It’s not racist at all. You Americans are the racists for making everything about race.

OH BULLSHIT. Why does he have an afro?
Chimney soot doesn’t suddenly cause straight anglo hair to to tightly curl. Take your revisionist scam somewhere else you dip.

Also, there’s no mention of the black character in the vid being Black Pete - they even show a picture of his sister and she’s the same color as he is.
Does chimney soot on a person cause their siblings to turn black, too?

Look, most people know other countries don’t necessarily know the shitty history the U.S. has with ‘blackface’ - and people in those countries sometimes naively have a white person made up to play a black person (without malice) - but you pulling out the ‘black pete’ thing here is just silly.

And the fact you automatically think any Swedish character with a dark complexion and an afro is Black Pete shows your true mindset about race and racism.

I don’t trust any man who doesn’t love branches!

You “don’t mind” branches? Get the fuck out of here!

I think maybe @SamSam is making a joke about certain countries’ cognitive dissonance and defensiveness concerning Black Pete and racism.

ETA: While attending university, I met a seemingly pleasant young Dutch woman who had decorated her apartment for Christmas, including Black Pete. When I expressed my discomfort with the concept without targeting her specifically, I was met with a very similar reaction.
My discomfort didn’t really even have anything to do with slavery, just the general attitude of dark-skinned people as The Other, or as Less Than.

Finally, a video where the auto-generated closed captions are useful!

I think maybe @SamSam is making a joke about certain countries’ cognitive dissonance and defensiveness concerning Black Pete and racism.

Ahh. So perhaps SamSam was being sarcastic in ‘explaining away’ the blackface?

I can see that - though the extra step of linking to the Wikipedia about Black Pete makes me think SamSam was being serious.

It’s totally possible I missed the joke - but I’m still good with my scoffery.

ps - ‘blackface’ in the U.S. doesn’t really have to do with slavery - it was a long standing situation in mainstream entertainment with white performers mocking black people with exaggerated makeup and characterizations.
Perhaps there is a slavery association with Black Peter - but I just wanted to clarify that ‘blackface’ in the U.S. generally isn’t really associated with it.

((note: Your use of ‘attending university’ instead of “in college” makes me think you’re not from the U.S. - But apologies anyway if my explanation about blackface is something you already know))

I went to the University of Florida; the primary reason I call it that.
I’m aware of blackface history. My concentration was Film and Media Studies.
My take is that the U.S. does have its history of blackface in entertainment, but many other countries have equally long histories of white on black oppression which have resulted in long-standing “darky” iconography. Pointing fingers at the U.S. for blackface with a capital B does not release them from their own guilt.
The idea that there isn’t a common sociological ancestry among any form of cultural appropriation or lampooning is as tone-deaf as the people who do it, IMHO, and I simply read SamSam’s response as a jab specifically at those who continue to appropriate and are flabbergasted when called out on their behavior.
I hope I’m not wrong, because I took it as being in the same dry humor as the Mitchell and Webb skit where the Nazi officer asks another, “Are we the baddies?”

Just as a data point, I don’t think Black Pete is a thing in Sweden - he’s more of a Dutch invention.

Judging by the tone of the humor in the clip i am inclined to say that the swedish group involved in making this show did the blackface thing on purpose. Perhaps they don’t know the full extent of how offensive such a thing is here in the US, but that does not excuse the intent nor ignorance of it. Black faced characters have always been used as shorthand to mock or caricaturize black people, even if it’s not willfully malicious it’s still wrong.

Your stance on international blackface is good info.
Thanks for the response.

ps - I dig that you went to college in Florida/America and use ‘University’ when talking about it.

ps - I dig that you went to college in Florida/America and use ‘University’ when talking about it.

Universities do exist here in the US. I’ve gone to one myself, and i have also gone to College (in the American definition of the word as i presume you’re implying). They are both higher education institutions but there’s important differences in how both are run.

Universities do exist here in the US.

I know this… Everyone around here knows this.
It’s just far, far more common for Americans to use the term ‘college’ as a catch-all (but you know that).

Because colleges are more common and less expensive that’s why

If Unis were affordable more people would say that.

Proof once again that sarcasm doesn’t survive the internet.

Also, lots of other countries just don’t know the shitty ‘blackface’ history of the U.S. 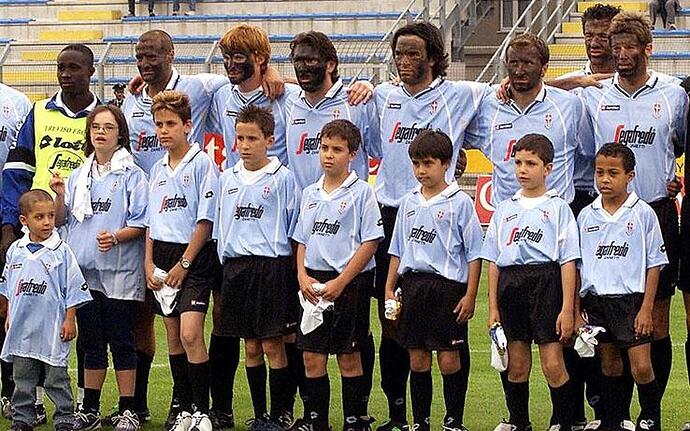 Article about the anti-racist display by Treviso FC players, following trouble directed at a Nigerian teammate.

I don’t recommend trying to do blackface as an act of solidarity under any circumstances.