I have used a number of different technologies: old fashioned lever machines, punched ballots, penciled “fill in the arrow” ballots, touch screens. The best system IMHO was the optically scanned, marked cardstock ballots. The lines were short because they need only one fancy expensive scanner per polling place and a dozen cheap folding tv-tray style places to actually mark your ballots. And there is a paper trail which allows you to randomly audit a few polling places to check the totals.

Edited to add: Admittedly my opinion is informed by the fact that my eyesight and coordination is still passable. The ability to embiggen the type on electronic voting machines make them easier to use for some people.

Voting should not be digital at all. There should be a paper ballot that the machines can tally. There needs to be a physical vote. Period.

Maybe we need a national vote-by-mail system. In my home state of CO, all voters have the opportunity to receive a paper ballot by mail a few weeks before an election. Voters can fill out the ballot at their leisure, and then either mail it back, drop it into a secure lockbox for collection, or hand-deliver their ballot to a voter center / polling location.

After the ballot is received and entered, voters can use the CO Secretary of State’s website to confirm that their ballot was received and will be counted. No waiting in lines, a verifable paper trail of ballots, and less need for kludgy solutions. The digital world is nice and all, but sometimes, a physical token is a better measure.

A receipt for your vote must be mandatory; either physical or digital (w/ cryptographic signature). Anything less makes election results highly suspect, especially based on the massive effort at foreign (not to even address potential domestic) meddling with votes.

With that said though, the real buggabo may be the deployment of digital propaganda (NEWSMAX) consisting of animated and static images served to your web pages that infect the mind.

I don’t mind electronic tools for voting, but the records and tabulation should definitely be on paper. Voting should be one of the basic, fundamental infrastructures the government invests in because voting is an expensive process. Hire some people, hire some auditors, and pay for several methods to vote. All simple necessities.

In addition to these reforms, voting machines need to be used more often. You can’t be confident that a system works as expected when it runs only once a year. I think voting machines should be used on a regular basis.

In my ideal world, each month would have a collection of issues and offices to vote for (including non-binding ballot initiatives which are simply used to poll voter feedback and provide insight for elected officials to act on). Any time during that month, a voter can go to a permanent installation that acts as a polling station, and cast their vote. Spot audits are performed on a regular basis. We never take the system “down”, and we have constant feedback about the process.

I think that might still leave it open to purposeful manipulation, but yes, maybe have it print a receipt the voter could verify.

My god how is this so hard? Scantron was founded in the 1970s.

Well a simple button interface would be great for voting, a printed out ballot and a data log can both be reviewed efficiently and compared against each other for errors, and more humans working more polling stations is a good thing. I would like to see a national standard for ballots too.

“Fearful of Hacking, Dutch Will Count Ballots by Hand”: 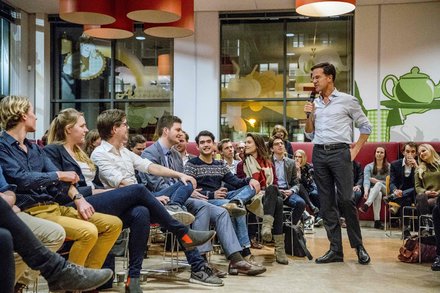 Fearful of Hacking, Dutch Will Count Ballots by Hand

The decision to forgo electronic counting, in national elections scheduled for next month, was a response to fears that outside actors, like Russia, might try to tamper with the election.

Earlier this year, there was an important legal dispute in Germany, about whether electronic voting machines were legal for use in German government elections. The dispute was decided by the German…

I basically agree. The only purpose of the machine is to fill out the ballot for you. Only the paper counts. No “receipts”, no other tallies, in fact have the ballot aid divorced from the tallying process.

Germany has a more complex system of voting, where you can vote for a party, but also vote for specific candidates from other party lists. And they manage quite well.

the only purpose of the machine is to fill out the ballot for you.

That’s the only valid reason I can see. To prevent spelling errors, basically, and to make votes legible for counting.

I think until we make election day a holiday - and stop paying people to be voting officials - there will always be an incentive to automate the process, which in turn will provide incentive to network the automation, which will provide means, motive and opportunity to hack the process.

images served to your web pages that infect the mind.

You have the power to think.

@Boundegar: Of course, but you are persuaded none the less.

[quote=“Medievalist, post:14, topic:102782”]
there will always be an incentive to automate the process[/quote] But going forward voting WILL be more automated, and there lies the problem, as you pointed out: “[it] provide means, motive and opportunity to hack the process.”

I’m surprise to see electronic vote is not even a question in France, it’s still 100% paper, with transparent sealed ballots (with 2 locks) kept in case of second count.
To me voting machine can only make people more suspicious of the process, it makes it more abstract. With paper I put my own vote in the ballot and nobody can even touch it. (I’m not saying our system is perfect, we had some trouble with electoral lists this year).
If you want to improve the voting process schedule them on Sundays and open a lot of small polling place.

Voting should not be digital at all. There should be a paper ballot that the machines can tally. There needs to be a physical vote. Period.

You don’t even need machine tallying.

We count 'em by hand over here. People hired by the independent AEC do the counting, while volunteer representatives from each of the candidates watch over their shoulders to make sure they’re doing it right.

The counting is done at the polling booths; the time required for the task scales with voters-per-booth rather than total population.