how many chaplains quit.

(I’d read the article to see if it mentioned that, even though the rep didn’t, but … NYT paywall!)

Also, late-stage chaplainism is now a thing, I guess.

Agreed. Non or all? Is it above normal attrition? How were the statistics generated?
OMG, now I have SO many questions!

If you want to do something terrible with technology, you can’t just roll it out on people with money and social capital. They’ll complain and your idea will tank. Successful shitty tech rollouts start with people you can abuse with impunity (prisoners, kids, migrants, etc) and then work their way up the privilege gradient. I call it the Shitty Technology Adoption Curve.

The point of the Shitty Technology Adoption Curve is to normalize technological oppression, one group at a time.

Although the interactions take place a little late to be called “hospice”, I think Neil Gaiman’s depiction of Death in the Sandman series (the comic, the book adaptation, or the Netflix series, take your pick), is the mark that all palliative care-givers should strive for. Compassionate, caring, and unafraid with no false platitudes or beating around the bush.

As someone with ADD (I don’t have the H part of ADHD, for better or worse), I assume my company does not use surveillance software since I haven’t been fired yet.

Why even have wasteful human chaplains when OMM 0000 is automatically available at your nearest omnichapel? His time is yours, he understands; and he assures you that you are a true believer; though he prefers that you be more specific.

“You’ve been spending far too much time consoling this elderly woman, get back to the Lord’s work!”

KPI! Key Performance Indicators! When I was a grunt programmer, I had to write programs to accrue and report on Key Performance Indicators. I hated it. Lazy Managers think that is all they need to do - check the KPIs and tell those falling behind to pull their socks up. It’s like those performance surveys you get after staying in a hotel. It’s a clue that the managers don’t know and don’t care what is going on in their business. I have torn up such a survey in front of the poor underling who passed it to me. What is to be done? Nothing. Employees and customers will leave and the businesses will fail.

It’s especially dire in this case given that the KPIs chosen all appear to be variations on ‘showed up’(with ‘showed up; telepresence’ worth less, ‘showed up; in person’ worth more; and ‘showed up; ceremonial’ worth yet more). That’s right up there with measuring programmers on text output per KB; or actions-per-minute in the IDE.

That isn’t useless data; you presumably do want, say, the chaplain best acquainted with a patient to be the one who goes to their funeral or speaks to their family; and you want to make sure that none of your people are burning themselves out or serve a patient group that is mysteriously spiritually tranquil on fridays and mondays; but if you are measuring chaplaincy in terms of face time you presumably understand it about as well as medical billing and coding understands psychiatry.

those performance surveys you get after staying in a hotel

I realized a long time ago that if I were to fill these surveys out is me doing a huge favor for the business, or their managers. I don’t complete them often.

I’d read the article to see if it mentioned that, even though the rep didn’t, but … NYT paywall!) 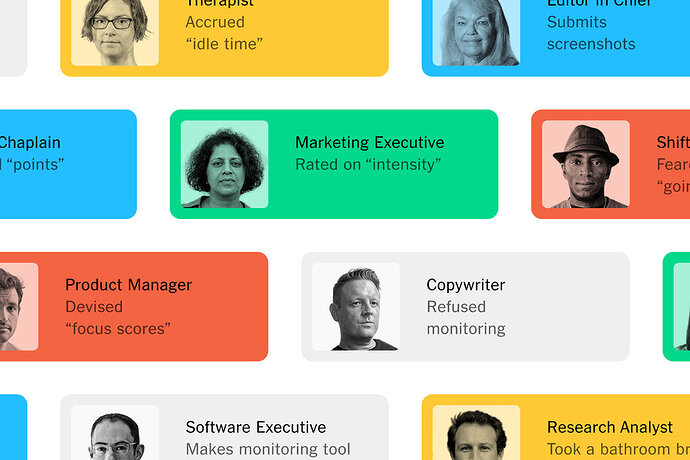 The Rise of the Worker Productivity Score

Across industries and incomes, more employees are being tracked, recorded and ranked. What is gained, companies say, is efficiency and accountability. What is lost?

The one company I worked for that tried this discovered a problem: by company policy even salaried employees had a set-in-stone 40 hour workweek, with overages being converted to comp time at 1.5 hours comp time for every hour over 40. The first week, I hit 40 on day 3, and since I was on-call, the numbers kept going up until I told my boss I was taking off the next week, as a) I had 40 hours of comp time and b) comp time had to be used up within the same 2-week pay period. He was not happy, but HR agreed that those were the rules, and that maybe he should hire more people. By the end of the next week, everyone in my engineering group was a week or more deep in comp time and threatening to take it all at once, and so they changed the policy – and I left shortly thereafter. 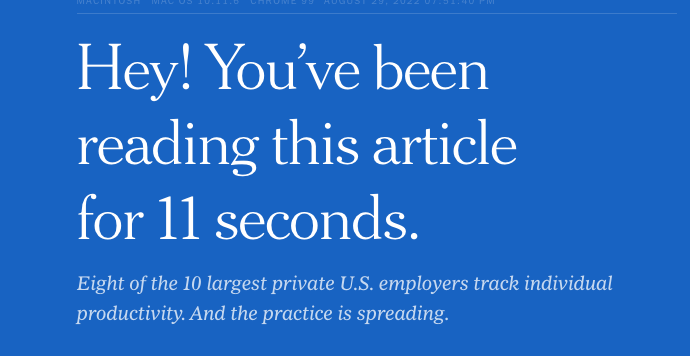 The only thing worse for productivity than KPI’s is the Net Promoter Score (NPS).

Gods, do I hate both those things

I fill them out for 1-1 interactions every time, because those are the KPIs for those people’s jobs.