Other than emergencies and other similar exigencies, paying for water is the biggest grift there is. Made worse by the environmental damages of packing, transport, etc…

I thought pedantry was going out of style.

Even if you could, I wouldn’t want to drink it. Drinking COMPLETELY deionized water can lead to hyponatremia. I’ve had that a few times, it wasn’t fun.

I’ve said it before.

If only there was some sort of “internet for water”. Some sort of “tubes” that could deliver water directly to where it was needed.

Two miles deep? Isn’t that where they pump the fracking waste?

I’ll stick with tap water in every city that has functional city services.

FWIW, Chicago has incredible tap water. Super tasty. Some of the best in the country, and really low in contaminants. It is piped in from Lake Michigan from these miles-off mysterious artificial round brick islands in the lake. (really, look it up on google maps)

You have to do some digging to understand the paradox, but fish taken from the same waters have fairly strict warnings on consumption due to pollution.

FWIW, Chicago has incredible tap water. Super tasty. Some of the best in the country, and really low in contaminants. It is piped in from Lake Michigan from these miles-off mysterious artificial round brick islands in the lake. (really, look it up on google maps)

Also because the city reversed the direction of the chicago river to reduce the inflow of industrial waste into their water supply. That was after continually extending the pipes farther and farther from shore stopped working.

I used to do a lot of traveling for my job. Chicago is why I bought a Brita charcoal filtered water bottle to keep in my luggage to use at the hotel.
“Tasty” I guess is technically a pretty accurate way to describe it. You definitely can taste it, and it leaves no doubt about where it came from.

So, Trump was able to unload all of that diluted vodka he once put his face on.

Regardless of whether the limit is well-chosen, its point is that you have to go over it to endanger people.

The arsenic standard, like many drinking water standards, is set, in part, by how difficult and expensive – how practical – it is to remove it rather than aiming for perfect safety.

…which is true of many drinking-water standards, but even so, arsenic is a special case. Most water standards are set, if not under, than at least close to, the “Public Health Goals.” The PHGs are the level below which, health experts agree, no harm is expected. Above the PHG, some harm is possible.

Arsenic standards, though, are set several orders of magnitude higher than arsenic PHGs.

Here in CA, f’rex, the state PHG for arsenic is 0.004 ppb, while the level permitted in drinking water (tap or bottled) is 10 ppb.

Arsenic is a natural mineral contaminant. Whether your water supply contains` noticeable amounts is purely ‘luck of the draw.’ Watersheds and riverbeds and aquifers and reservoirs and canals may or may not have arsenate minerals; if they do, their water will contain them.

The R/O filtration chains that turn tap water into Dasani or Aquafina (or Coca-cola and Sprite, for that matter) will remove virtually all arsenic.

But at even at half the permitted levels, arsenic can still cause serious problems for developing neural systems - children and infants and pregnant women should NOT use a primary drinking-water source with 9 (or even 5 or 4) ppb, as that is known to produce frank and obvious neural deficits.

The oft-repeated claim that tap (or bottled) water is “perfectly safe” if it passes federal/state drinking-water standards has a huge hole in it if your water contains arsenic.

(Some other standards are also arguably problematic, especially for vulnerable populations, but none of those others so vastly and egregiously exceed genuinely safe (PHG or less) levels.)

What if one of those samples is legit zero arsenic? You can’t have at least three times zero.

This argument is starting to remind me of Usenet circa 1991 circa September 1993.

edit: had to fix the date

I’ll stick with tap water in every city that has functional city services. Tap water is subject to all kinds of regulation and testing

Federal standards permit up to 10 ppb arsenic in tap water. In my corner of LA, we get about 4 ppb.

Water bottled in CA is subject to exactly the same standards as tap water. But “purified water” brands (NOT “mineral water” or “spring water”) have virtually no arsenic at all, since the R/O filtration systems that beverage bottlers use to purify municipal tap water are very efficient at removing arsenic.

Any municipal tap water may have as much arsenic as this WF bottled water, since anything less than 10 ppb is permitted.

But it’s Organic Arsenic. Quality is a state of mind at Whole Foods Market .

But at even at half the permitted levels, arsenic can still cause serious problems for developing neural systems - children and infants and pregnant women should NOT use a primary drinking-water source with 9 (or even 5 or 4) ppb, as that is known to produce frank and obvious neural deficits.

And then there’s the rather well known cumulative effect/relationship between arsenic and cancers…
so yeah… best arsenic is no arsenic.

Include some old lace on the retro design label – niche filled.

Wiki starts the article on arsenic with robbed bison juice, I have no idea either but it was eye-catching.

I am not going to go into the discussion about what levels of arsenic are right. The original article gets it about right with “concerning levels of arsenic”. Having a state PHG of 0.0004 ppb is a great aspirational thing, but no help if all your local water has 10 ppb of arsenic. There is no cheap way to pull it all out, so get a water filter for the stuff you drink and leave the rest. If you can afford it.

The real problem is the people who have strange ides of ‘pure’ and ‘whole’. Who in heck thinks that percolating hot through cracks in hot rock two miles down for ten thousand years is a letter of recommendation for water?

Tap water is subject to all kinds of regulation and testing

Oh yeah, about that… 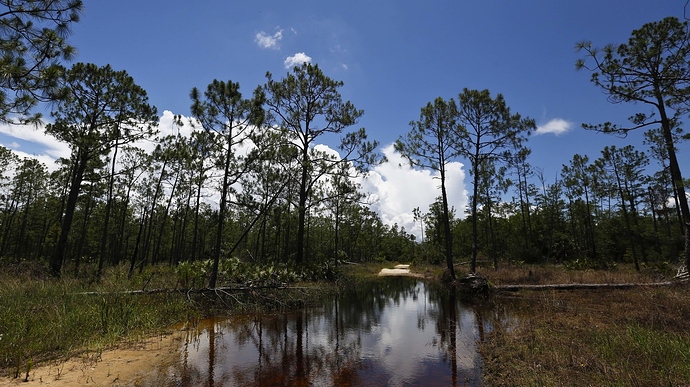 Trump Administration Cuts Back Federal Protections For Streams And Wetlands

The controversial rule change dramatically reduces pollution protections for many waterways. Farmers and builders approve, but environmental groups plan to challenge it. 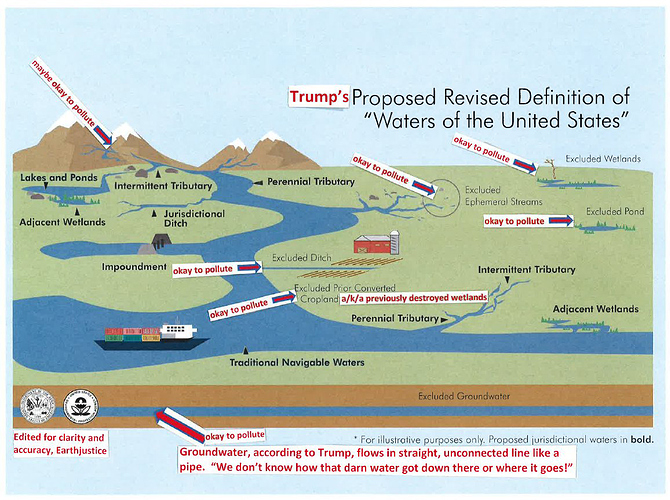 Today, as we prepare to celebrate Earth Day, Trump’s Environmental Protection Agency (EPA) published the final rule for the rollback of key parts of the Clean Water Rule. This move is part of a multi-rule rollback effort by... 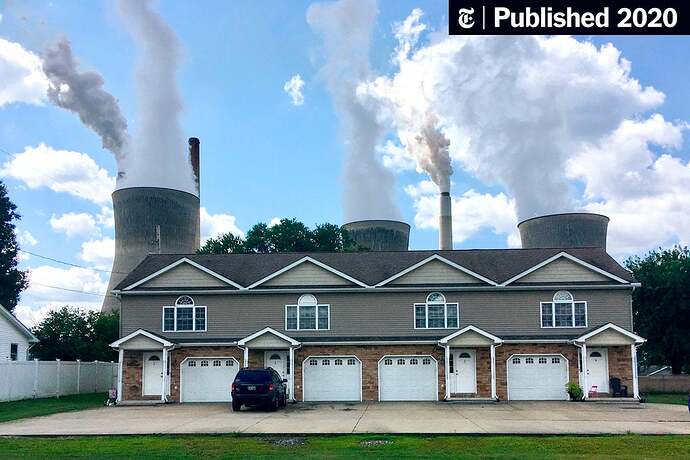 The agency is changing the way it calculates the benefits of mercury controls, a move that would effectively loosen the rules on other toxic pollutants.