Ah, finnaly an explanation for all that https://en.wikipedia.org/wiki/Furry_fandom action way back then.

This. Everyone should watch this documentary and never trust a rabbit again.

Now I’m stuck wondering how many other Monty Python jokes have a serious academic basis.

but do you wonder enough to overcome the #1 humanness biomarker?

I can take care of that.

I thought that they were a reference to hell.

Terry Jones read English (and had a self-described “history problem”) while at Oxford. I bought a copy of one of his non-fiction books on Chaucer (1980), which I later gave to an English professor.

History
"Jones has written books and presented television documentaries on medieval and ancient history and the history of numeral systems.

His first book was Chaucer’s Knight: The Portrait of a Medieval Mercenary (1980), which offers an alternative take on Geoffrey Chaucer’s The Knight’s Tale. Chaucer’s knight is often interpreted as a paragon of Christian virtue, but Jones asserts that if one studies historical accounts of the battles the knight claims he was involved in, he can be interpreted as a typical mercenary and a potentially cold-blooded killer. He also wrote “Who Killed Chaucer?” (2003) in which he argues that Chaucer was close to King Richard the Second and after Richard was deposed Chaucer was persecuted to death by Thomas Arundel.[9]"

So, yeah. The troupe had some gravitas.

A modern example in this twisted shirt design I bought years ago on Shirt.Woot:

Recently a group of us went into our manuscripts store to have a look at some medieval genealogical rolls. We were examining Royal MS 14 B V, an English roll from the last part of the 13th century that contains quite a lot of marginalia, when one of...

maybe it was just the “gelatinous cube” of its time…

They were also fond of other animals at war:

All images from the wonderful Got Medieval blog http://www.gotmedieval.com/

Has anyone told this guy?

I recently learned that the “five Adams” remark the Metatron makes early in Dogma stems from an actual piece of kabbalistic lore, so I wouldn’t be surprised given most of the Pythons’ backgrounds.

Let us not forget hedgehog illuminations (they weren’t warriors, but they were there, and almost delightful):
Hedgehog who looks a bit too much like an actual hog watching someone.

Hedgehog chiding a goat for its vanity:

Hedgehogs with stuff stuck on their quills (which was considered diabolical symbolism, apparently): 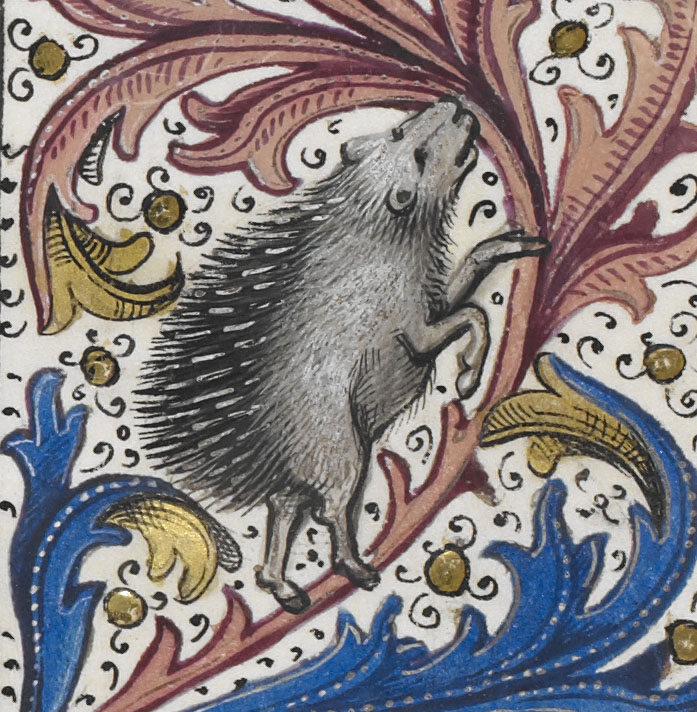 Having once spent I don’t know how much time watching a wild hedgehog amble around eating bugs I’m not surprised monks were pretty taken with them too.

Hedgehog chiding a goat for its vanity:

So. Not the Mayan Incursions then?