Wikipedian corrects 15,000+ instances of "comprised of"

This comprises many of the issues I have with “comprise.”

Mr. Henderson has just eliminated the need for any further discussion of what is required to earn the Pedants Pendant here at the BoingBoing forums.

In the world where Mr. Henderson lives, no one else can be worthy of being named a pedant.

It could improve the encyclopedia. It could get someone angry and start an edit war and escalate though. “I have been guarding the sacred text, and you must not change it!”

The problem is that there is really no good reason to suppose that “comprised of” is ungrammatical in the first place. The idea that this is some sort of new confused coinage is simply mistaken. The ever excellent “Language Log” blog discussed this issue in 2011 and found examples of “comprised of” dating back to the 1700s. So an argument that this well established phrase is somehow inferior to “composed of” is a bit silly.

He so needs a wiki page. Stating clearly his manifesto.

You can only save one from drowning: apropos or comprised of…

The same argument can be used for “opportunity of +present participle,” “different to,” “abolishment,” “in a bad way,” “an historic,” etc…

Which version is more clear, and more readable, across more dialects?

There is a reason English is not French (or Latin, or German, or Gaelic, etc), and that is because the people of England spoke French (or etc.) wrong but understood each other anyway.

If some people say “comprised of” and other people understand what they mean, the language worked and it is thus, correct.

That’s a somewhat different issue, although there have been attempts to purposely limit English in order to supposedly make it easier to understand such as Ogden’s Basic English. Whether or not they work is somewhat questionable. A perhaps apocryphal story was that Winston Churchill was a fan of Basic English until he was told that his saying “blood, toil, tears, and sweat” translated to “blood, hard work, drops from eyes, and body water”.

Mr. Henderson has just eliminated the need for any further discussion of what is required to earn the Pedants Pendant here at the BoingBoing forums.

Actually, it’s all about ethics in BBS pedantry.

In other news, I am surprised this is not a bot.

Hmm, can I go after “based off of” instead of “based on”?

When I read or hear that one, I just…

Reminds me of Sneak Peek bot.

Gotta set one of those up that can detect nouns and verbs, and then use it for “effect” and “affect.” 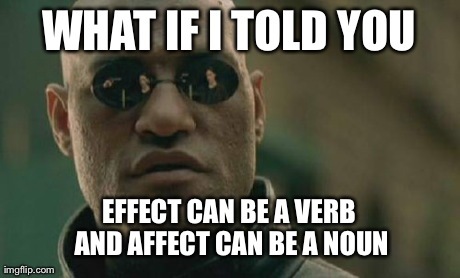 Oh god, affect and effect. I was once told, 'Well everyone else thinks you’re wrong so…"
I had to admit to myself that if everyone started using it incorrectly, it would be right. But there’s a time and place for those kinds of consideration and the middle of an argument a discussion about ‘affect’ and ‘effect’ is neither.

Wait, do mean the God affect, or the God effect?

Perhaps both. But I’m delusional.

This is what I love about people. We just do these things because we have to.

The problem is that there is really no good reason to suppose that “comprised of” is ungrammatical in the first place.

You know what you have to do now, don’t you? But get some better quotations first, blogs don’t really count.