You won't believe the bizarre tax policy on Counter-Earth

Tom the Dancing Bug, IN WHICH we peer into the strange and bizarre way Counter-Earth uses tax policy to try to help the middle class.

~~ begins calculating the trajectory for a Hohmann transfer to Counter Earth ~~

It rained all night the day I left
The weather it was dry
The sun so hot, I froze to death
Middle class, don’t you cry.

FWIW, Planet Money has an interesting argument for doing away with corporate income tax entirely:

Of course, they also have an episode on how trickle-down fails (because the business owners don’t hire more people when they get a tax cut, they buy more inventory):

I could see why no corporate income taxes could be a good thing, but only if capital gains are fully taxed as income and America adopts a truly progressive tax regime.

I can understand the principle of not “double-dipping” when taxing any individual dollar, but the way the system is currently set up, the ultra-rich and global multinationals never get dipped at all.

It’s either an elliptical orbit with a period of six months, so that you return to Earth’s orbit when Counter-Earth reaches the point that Earth (and your spacecraft) were six months earlier; or if that gets a little warm, a longer one of eighteen months period.

In the last panel, is the fella in the red necktie is a business executive or clergy? 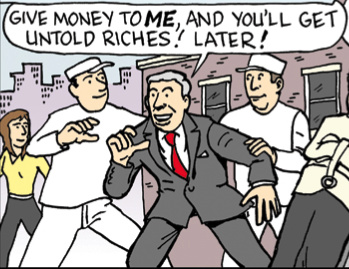 As I went walking I saw a sign there
And on the sign it said “No Trespassing.”
But on the other side it didn’t say nothing,
That side was made for you and me.

In the shadow of the steeple I saw my people,
By the relief office I seen my people;
As they stood there hungry, I stood there asking
Is this land made for you and me?

In the last panel, is the fella in the red necktie is a business executive or clergy?

Ehhhh… I have huge trust issues with NPR/PRI since the mid-2000s. When their original founder died, he was replaced with some fundamentalist whackadoo and the vast majority of the NPR/PRI/Etc Boards of Directors were gradually replaced with corporate interests.

I mean. Just the fact that “Planet Money” went from a background show to a headliner should probably get your attention just by itself! Not to mention the huge shift from “lots of controversial and investigative topics” to “weakly liberal but still 99% establishment- and corporate-friendly commentary on mainstream topics”.

It’s not bad, but it went from one of the few really independent news sources to being a very-slightly-edgier MSNBC.

If you think they’re interchangable, that’s likely part of the issue. They aren’t. Not even hand/glove. Use a broad brush and you’ll lead people to the conclusions you’ve drawn, which I think aren’t quite sound or thoroughly researched. I think you might have another look at how those two separate organizations are organized, funded, managed, run, and staffed and come back better informed. Or don’t, but at least someone tried to tell you this one time.

Of course, they also have an episode on how trickle-down fails (because the business owners don’t hire more people when they get a tax cut, they buy more inventory):

Well… this is exactly why current trickle down doesn’t work yet!
Workers are still, at least theoretically independent entities with their pesky inalienable rights. When we hit the final stage, and workers are inventory, then there you go!

Any lackluster performance you see is due to inadequate sticks and too many carrots.

is the fella in the red necktie is a business executive or clergy?

IN a practical sense yes. I’m speaking more of the time when our dear leader tRump, “makes america great again” (like his pappy always dreamed about), and you can actually buy and sell humans again…

Okay: Ruben is a dude, and Tom is a fine comic.

Why is he pitching this at the middle class instead of the working class? Why target the moderately privileged minority instead of the truly oppressed majority?

Much of the critique aimed at the ruling class also applies to the middle class when viewed from a working class perspective. The bulk of both the benefit and the blame for the current catastrophe flow to the 0.0001%, but the middle class are not completely free of responsibility.

Although I can see an assortment of defensible reasons as to why he pitched it this way, it feels to me like this is yet another reflection of the exclusion of the working class from political power in America.

The white, middle-class liberal perspective instinctively centres its own class interests…for much the same reasons as why I am continuously banging on about the working class.

I can understand the principle of not “double-dipping” when taxing any individual dollar, but the way the system is currently set up, the ultra-rich and global multinationals never get dipped at all.

I have never seen a sensible explanation for why “double dipping” is bad at all.

What is the difference between taxing some income a little bit on two occasions, vs taxing it a big bit on one occasion? It’s the same amount of tax.

It’s the same amount of tax.

Not always, and especially not marginally.

For instance, if you have both income and sales tax (Utah has this), then the poor folks who have to spend a comparably large percentage of their post-tax income on necessities like food and rent are more negatively affected than rich people.

Thing is, somehow getting rid of double-dipping always seems to favor the guys with the expensive lobbyists and the non-voter corporations, and not the actual human beings it’s pitched at protecting.

Not always, and especially not marginally.

If not, then the problem lies somewhere other than the double-dipping.