If you like this style of game check out Martian Dice. It has a similar level of difficulty to Zombie Dice, but you start your turn rolling all 13 dice, attempting to abduct humans, chickens, and cows while avoiding the army tanks. I’ve played both and prefer the Martians. PEW PEW PEW 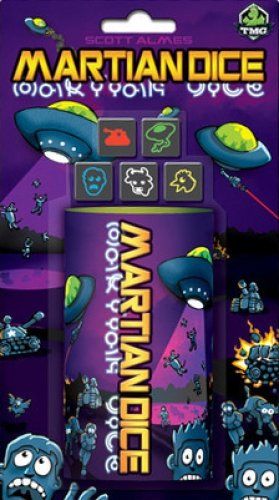 Your mission, Martians, is to swoop down on the pathetic denizens of the primitive planet Earth and scoop up as many of the inhabitants as you can manage. We are interested in samples of the Chicken, Cow, and Human populations so that we can...

For me all you have to say is “designed by Steve Jackson”. I assume this is the same Steve Jackson who wrote the Sorcery! series of books, which I’ve just discovered, to my great delight, has been adapted into an interactive game.

You are more blessed than you knew, because there are in fact two completely different game designers named Steve Jackson.

You’re thinking of the British one, who did in fact write the original Sorcery! game-books (and whose digital adaptations are in fact brilliant).

The American Steve Jackson, whose company publishes Zombie Dice, is probably best known today for the card game “Munchkin”. In the 1970s through the 1990s he was better known for his tabletop RPG work, particularly the “GURPS” system – but his more recent (and much more lucrative) work in making fast, accessible card and dice games has largely eclipsed that.

The two designers can be even further confused due to the fact that British Steve Jackson is often referred to as “the guy who wrote those Fighting Fantasy books” whereas American Steve Jackson contributed three books to the series!

Pshaw. Next you’ll be telling me that the British beer enthusiast Michael Jackson and the guy who recorded ‘Thriller’ are two different people!

Seriously, though, thank you for that. I vaguely remember the “GURPS” system, and it’s really cool to know who was behind it.

I like Zombie Dice, and it’s fun, easy, and portable. It’s definitely a lightweight casual dice game though - there aren’t a lot of real choices to make, and you have to wait for everyone else to take a turn so there’s a little downtime. The game is quick enough so there’s not that much downtime, of course. Martian Dice gives you the same sort of thing. Dungeon Roll is something else in the same vein - multiplayer solitaire, very light, simple choices in a cute theme in a neat container.

However if you want something with a little more meat, I’d suggest you check out my game Ninja Dice. Full disclosure that I’m the designer! I made Ninja Dice to plug a few of those issues mentioned above. ND is fully interactive (you don’t wait for a turn, everybody is usually playing); there’s a bit more strategy involved; and there’s a unique mechanism in play where the dice location/orientation after they fall are part of the game. Plus it comes in an adorable plushie Ninja head/dice bag thing. ND is kind of a “medium” casual dice game. We just released it and I had a blast playing with folks at PAX East last weekend.

But, if you are looking for something in the “light” casual dice game family with games running very quick and very easy, Zombie Dice is definitely something you should check out. It’s fun and easy to pick up and available pretty much everywhere that sells games.

I was in a game store and impulse bought this on Sunday! We haven’t played a full game yet, but, it is pretty fun!

Zombie Dice is one of my go-to “filler” games. It can get a bit old if you try to marathon it for hours at a time, but it’s great in-between more “serious” games / when you only have a shorter time to play.

Good to hear you found Zombie Dice fun. The game has done amazingly well for us, selling roughly 200,000 in the first four years of its release. We’ve even expanded the game with more dice for everyone who wants to make things just a bit more violent.