10 acting bloopers that made it into the movie

What what are the best acting bloopers that ever made it into a movie?

In the film 300, actor Gerard Butler was actually supposed to tell the Persian envoy “This is my good friend Spartacus. He will provide the Earth and Water you require as a symbol of our submission to Xerxes.” But when the moment came up he couldn’t remember the line and spouted out “THIS… IS… SPARTAA…” before getting so angry he kicked actor Peter Mensah down a pit in frustration.

Mensah ended up hospitalized for six weeks, but the cast and crew thought the moment was so hilarious that they ended up re-writing the script around the scene.

In Richard Lester’s 1973 version of “The Three Musketeers,” when Roy Kinnear falls off his horse it was an accident. But it was funny so they kept it in…

This did not end well for either Kinnear or Lester.

In the original shooting for Star Wars, Richard Dawkins burst onto the set and screamed at Lord Vader “Your sad devotion to that ancient Jedi religion is nothing more than a delusion, as are all religions”. Lucas reshot the scene, of course, but amended the script on-the-spot to include a variant on the phrase, and added the memorable choke-hold, as well.

Can’t believe the Indiana Jones “fly on the face” made it into that reel, but not this scene:

IIRC, technically not adlibbed, they just altered the scene due to Harrison feeling like shit.

Damn, the story I’d heard was that it was an adlib. But you are right - he explained it in a Reddit AMA last year.

“The Usual Suspects”-- the entire lineup scene at the beginning was considered a wash because they weren’t supposed to be all jovial and relaxed. The other actors were trying to get Gabriel Byrne to break character so they were cracking jokes between takes (and Stephen Baldwin’s comic delivery of his line was completely unscripted.) The director finally just decided to use one of the takes he didn’t initially like and found it worked better than what the script called for.

“The Usual Suspects”-- the entire lineup scene at the beginning was considered a wash because they weren’t supposed to be all jovial and relaxed.

Is that the one about, uh, the hooker with the dysentery? 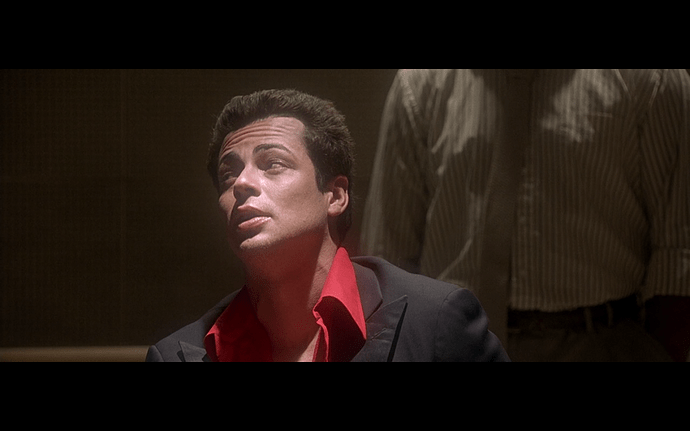 (Not the same scene, I realize now. Oh well.)

Video link for the BBS.

That video was worth it just to learn that Dustin Hoffman hotboxed Tom Cruise!

Absent a very late re-edit from Spielberg, at least there’s no question who shot first. *

* Strictly speaking, of course, the “first” is unnecessary…

It’s one off my favorites! I remember watching with Bryan Singer’s narration and he talked about how pissed he was with the entire group (if I remember correctly, Gabriel Byrne was laughing, too) because it was taking F-O-R-E-V-E-R for this one scene. There was also a lot of farting by one of them (Benicio del Toro, maybe?). Singer finally gave up and used the outtakes.

Lenny Montana repeatedly forgot his lines when filming his pledge and the crew eventually had to just give up getting the scene down.

So Coppola later inserted a scene with Luca reciting his ‘speech’ into the party. 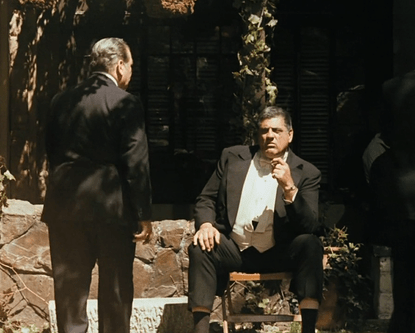 Coppola is the man.

In E.T., the mom knocking over E.T. with the refrigerator door (while remaining oblivious to its presence) was an accident, but good slapstick so Spielberg kept it in.

(Not a blooper, but in the novelization by William Kotzwinkle (!) the family dog has a running interior monologue.)