Restoring the historic names to the historic properties cost the American taxpayer $12,000,000 and legal fees.

Technically the U.S. government paid $3.84 million and Aramark (the new concession company) paid $8.16 million. So the lion’s share will be paid by the private company operating the hotel and other venues, and this passed on to the people who spend money there.

It was a big dumb mess from the beginning but at least the NPS was able to change the rules going forward so it won’t happen again.

Would a rose by any other name not smell as sweet?

Ah, another fine example of the awesomeness of the invisible hand being yet again as opportunistic as hell. We the people really do need to circle our wagons against… what do I want to say? Perhaps clever, or do I say, conniving business people?

How bad was the contract that they assigned rights (I’m assuming these were the names of those areas well before the 20 year contract began with the last company) to a company with no plan to get them back after the contract ended if they changed vendors? The article really doesn’t explain how the other company had a legal right to the historical names of the sites they worked and I just don’t have the time to scour the internet this morning looking for those answers, although I feel like the light gloss coverage the CNN did barely tells us anything about how this all came to be.

To heck with re-naming them back. The Ahwahnee should just be called “Awesome Fucking Place To Stay Hotel”, Wawona should be “Huge Ass Trees Nearby Hotel”, and Badger Pass should be “Break-neck Double Diamonds, Dude”. Or at least that’s where it seems we’re heading.

I wonder what the fine print on that contract says. Like what if they just started calling it by it’s old name. Maybe buried in legal paperwork it would still carry a stupid name but one that no one uses.

I loved it when, although Shea stadium had been renamed Citi field, Citibank had not paid for the rights to name the subway stop. So it went from Shea stadium stop to Mets/Willets Point stop. Small victories. You take em when you can get em.

You should know by now to not bother the writers at Boing Boing with accuracy when there’s outrage to be had.

How bad was the contract that they assigned rights (I’m assuming these were the names of those areas well before the 20 year contract began with the last company) to a company with no plan to get them back after the contract ended if they changed vendors?

I believe the names weren’t trademarked when the contract with Delaware North was written in the 1990s. The concessionaire then went on a trademarking binge to prevent counterfeit products and such. But, no one at the USPTO or US Park Service thought to question whether the concessionaire should own the names to these iconic locations on public property.

At least that’s clarified now with the new contract… trademarks revert back to the government at the end of the term.

It wasn’t an entirely incorrect statement since most people who spend money on Aramark’s concessions are presumably taxpaying members of the public, but it does bear clarification.

Would a rose by any other name not smell as sweet?

Simpsons: “Not if it were called a stinkblossom. Or a crapweed.”

"San Diegans might remember the 2005 battle between Delaware North and Diane Powers, then operator of numerous shops and restaurants in the Old Town State Park. Her 33-year investment and improvement of Bazaar del Mundo, in what once a dusty, run down state park, became a major destination tourist attraction. So much so that Old Town State Park became the number one most visited state park in California.

Delaware North ousted Powers with promises of large investments. Outrage from local business leaders and tourism agencies couldn’t sway even then Gov. Schwarzenegger to step in and reverse the park department’s decision. … By 2009, Delaware North’s revenue from its Old Town operations declined 66 percent over what Powers was producing. The company fled Old Town, turning over the operation to a local restaurateur."

From my memory in growing up nearby and skiing there maybe twice, there are zero challenging runs. I think maybe intermediate is the most challenging? Has a 800 ft. vertical drop. (Note: website states 15% advanced, but I remember it as being more of a navy square than black diamond.)

This ski resort is known as the place to learn, not to carve. 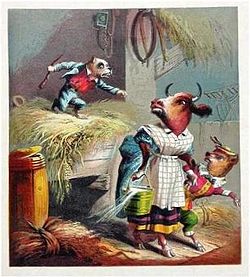 The Dog in the Manger

The story and metaphor of The Dog in the Manger derives from an old Greek fable which has been transmitted in several different versions. Interpreted variously over the centuries, the metaphor is now used to speak of one who spitefully prevents others from having something for which one has no use. Although the story was ascribed to Aesop's Fables in the 15th century, there is no ancient source that does so. The short form of the fable as cited by Laura Gibbs is: "There was a dog lying in a mang...

I’m horrible at boarding. What I always found amusing is that east coast double black diamonds would probably be more of a blue square out west. We just don’t have the slopes.

Of course, if you factor in the fact that you are usually on crushed ice instead of powder, I suppose that makes it harder…

Of course, if you factor in the fact that you are usually on crushed ice instead of powder, I suppose that makes it harder…

I was gonna say…you really learn to use your edges out back East.

If you ever get a chance to go to Yosemite in the winter, it’s very beautiful. And then take a day at Badger Pass (I refuse to call it anything else

Why does capitalism have to mess with the meaning of every damn thing? (GA trans.: “ever dang thang”)

Twin Peaks called and wants its names back.