That’s all of them. 33,636 in just one year. Every one of those guns is a life cut short, a life that could have been lived. A person that contributed to society and now is no more. Thirty three thousand, six hundred and thirty six. Every single year in America, all by guns, and still we do nothing.

Well, we do make infographics. That’s something. 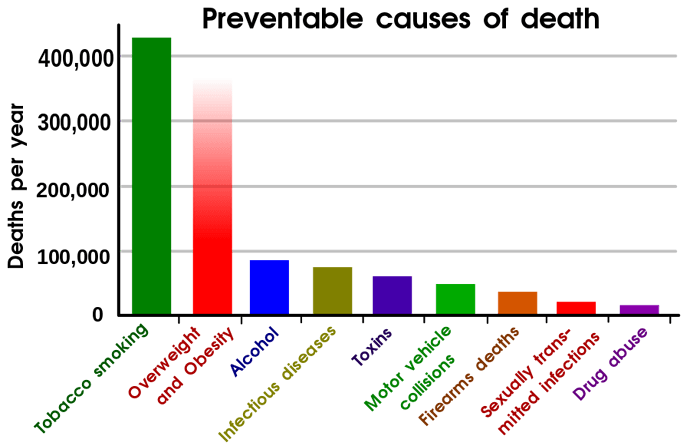 Source: Wikipedia. This particular infographic is not believed accurate.

Just another gun thread?
This is gonna be the roughest, toughest, rootinest, shootinest gun thread that ever did thread.

What the… Does he just not understand the point of Unicode, or is he catering to the vast audience of readers using browsers that don’t support Unicode, do support PNGs, and don’t have a seizure trying to render 33,636 of them?

I appreciate somebody standing up for my right to continue indulging in my favourite hobbies of smoking, eating and drinking other people to death.

Next we’ll be hearing from some ludicrous arsehole who thinks we should do something about it! HA!

God, the childish nonsense that some people confuse for thought these days.

Hrmm…
My browser had a hissy fit trying to load that. god forbid anyone use unicode.

Give us a break. Every item on that list is the focus of significant public health efforts on the part of a variety of agencies and organizations. Look at what’s been done to Big Tobacco. Look at work on obesity. Look at substance abuse treatment programs. Look at antibiotics and vaccines. Look at the decline in motor vehicle deaths, even as miles driven has risen steeply for years. Look at safe sex campaigns. Look at efforts to find an alternative to the war on drugs.

What’s missing? Any coherent effort – any effort at all, really, to address gun deaths.

Two thirds of gun deaths are suicides. Do you think we don’t make any effort at all to combat suicide? You may dispute that we do enough. But we do make an effort.

The suicide aspect to this gets me. Should people have a fundamental right to commit suicide?

I appreciate somebody standing up for my right to continue indulging in my favourite hobbies of smoking, eating and drinking other people to death.

Season’s greetings and best of holidays to you and yours. Deus Sol Invictis!

Should people have a fundamental right to commit suicide?

You’re not living freely if you’re alive against your own will.

(This is the one I’m going to get in trouble for, right?)

As a snarky cannibal, I’ll attempt to put your suggestions into practice.

have a good one

There is an effort for education and encouragement to lead a healthier lifestyle and drive safer etc. There is also an effort to make sure certain things are inherently safe, like making cars safer to drive. All those things are fine.

I am not fine with like the NY law limiting the size of drink you can purchase.

Now - let’s “address” gun deaths. Which ones do you want to address, because the solutions for accidents, suicides, and violent crime require 3 totally different solutions. The CAUSES of these three issues are very different. Within the subset of violent crimes there are “professional” criminals, people who have a clean record who decide to commit a crime or murder, and those who plot a mass shooting for what eve reason. Those three subsets have much different causes, motivations, and their solutions will be different.

So which ones do you want to talk about?

Is there a graphic to show how many people were killed by cars last year?
They’re everywhere, far more ubiquitous than guns?
I don’t know many people who own a gun, but everyone I know owns at least one car!
Even worse than that, people with cars are killing people all over the world with pollution, Can guns kill people with byproducts they produce?
What about all the farm land, being laid to waste by pollution and ethanol production?
Then theirs global warming! Don’t even get me started!
We shouldn’t just get rid of guns, but cars too…maybe trucks…boats…plans…power plants…
Hell, we need to get rid of electricity…No all industrialization.

You what would really fix things. Let’s just get rid of all the people!

Welcome, as we say here, to BoingBoing. You registered just to post this word salad?