The identities of the suspects have not yet been released.

I know this is some work, but can will the article here be updated to show that Alexandre Bissonnette is identified as the sole suspect, and that witness Mohammed el Khadir has been released? The updates aren’t timely enough to share this recent information.

It’s sad (and rage-inducing) that it can happen here, of all places.

This is just terrible, QC is such a beautiful city and I hate to see it live in fear.

It’ll be interesting to see how Trump completely fails to acknowledge this anti-Muslim terror attack. (Because, of course, you know he’d be all over it if the killers were Muslim.)

More importantly, it is correctly listed by Trudeau and the media as a terrorist attack. In the US, this would simply be “mass shooting”. It would also be reported at best on local news, and certain parts of the internet, but no national fanfare.

Photos of one of the shooters:

Alexandre Bissonnette, 27, has been accused of killing six people in a "barbaric" terror attack on a Quebec City mosque.

The other guy is of Moroccan descent:

A lone gunman reportedly opened fire a crowd of 40 performing evening prayers at a mosque in Quebec, Canada on January 29. Mohamed Belkhadir was held as a witness.

I don’t think any motive has been released yet.

That’s true. It also doesn’t change the important point – that the way things are going in North America right now, if you see a headline with attack and Muslims, it’s a safe bet they are mentioned because they are the victims. Some people are condemning this hatred, and horrifyingly some are working hard to promote it.

I saw this background article on another site, which may provide some context. tldr; version is that Canada (Quebec in particular) is by no means free of the same organised bigotry and xenophobic populism we’re seeing in the U.S. and in Europe.

I believe that Canada’s Conservative Party has at least one candidate trying to ride to leadership on these ugly anti-immigrant sentiments and that some Quebec politicians have also been using them. I hope that the statements from the PM and other leaders in reaction to this horror drown them out now, because if things continue as they are going Canada stands to be one of the last bastions of Western liberal democracy.

The Trump effect and the normalization of hate in Quebec

Hate crimes are on the rise in Canada, which has an estimated more than 100 right-wing extremist groups, including 20 to 25 in Quebec

They could have just been all out of bubble gum.

Looks like now, only one of the two are suspects, the other is a witness. Currently, unclear which is which and so both names have been removed from CBC’s page. 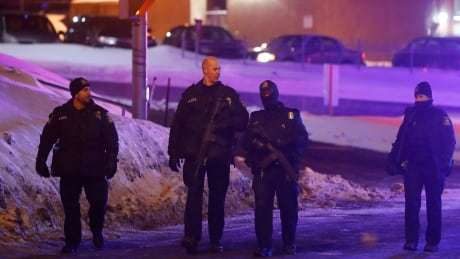 Two men have been arrested after six people were killed and eight were wounded in a shooting inside a mosque during evening prayers Sunday, in what Quebec's premier described as a

I believe that Canada’s Conservative Party has at least one candidate trying to ride to leadership on these ugly anti-immigrant sentiments and that some Quebec politicians have also been using them.

Yes, Kellie Leitch, a vile person. It’s hard to know how much is pure opportunism, and how much is a truly held belief. Regardless, she must not win. The other candidates are more reasonable. One of them, Michael Chong seems to be an environmentalist (of the free market sort) and truly in favor of immigration. He has no chance of winning, but one can always hope.

There are two facts here that we do know:
A) it was a terror attack - an indiscriminate mass killing aimed at a specific group,
B) the target group was Muslim
So whatever else we find out about the shooters and motivation, that much is still true.

Keeping in mind, of course, that you previously claimed that “vast majority of reported anti-Islamic hate crimes seem to be hoaxes or misunderstandings” and when pressed for proof only cited a small number of non-hate crimes.

This absolutely is a terror attack. While I’m heartbroken that it happened in QC, the fact is this sort of violence is happening everywhere, and terrorists are being emboldened by the anti-Muslim rhetoric now coming full-force from our much larger southern neighbours.

My condolences to the families of the victims.

Yeah, when I read an article on Slate about this attack, the ad it served me was from Kellie’s campaign, “Do you think immigrants should be screened for anti-canadian values” or somesuch - I flipped off my computer screen.

From multiple sources, it looks like Bissonnette was the one who turned himself into the police because he felt guilty about what he had done with the weapons in his car. I’m guessing that he’s not the witness.

His exact motive is still unclear, of course. But since no-one has said that he was known to anyone at the mosque it doesn’t look like it was a personally motivated assault (e.g. a domestic dispute or internal community disagreement with the imam). It also isn’t a robbery gone horribly wrong. Whatever the exact motive is, it’s an act of terrorism perpetrated by an outsider against a religious group, however eager some are to deny that.

This. So much this. Thank you.

(And I say that as one of your southern neighbors who hasn’t gone crazy, and is trying to fight this.)