apparently, some people can run an entire marathon while chain-smoking cigarettes.

Every once in a while that can save the day. There was a King of the Hill episode where the Olympic torch passed through Arlen and Dale takes the opportunity to light his cigarette with the Olympic flame. When the torch gets put out accidentally Bobby saves the day when he realizes that chain-smoking Dale kept the original flame going and they’re able to re-light the torch. 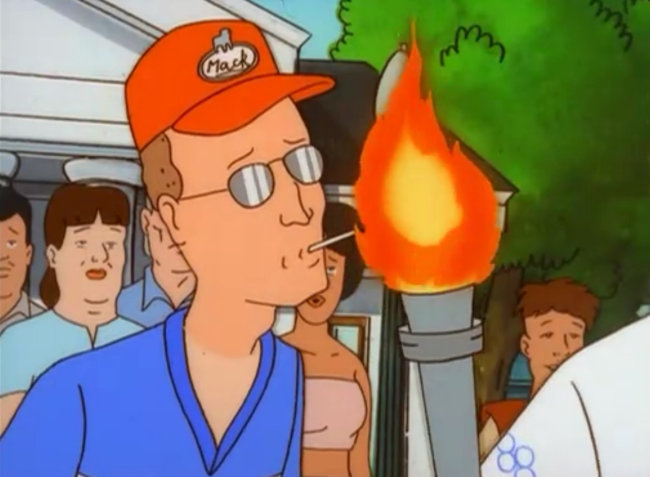 One anecdotal report notes that Chen apparently only smokes when he runs.

In sci-fi films such as Screamers and Millennium people smoked anti-radiation cigarettes. Perhaps China is testing out anti-pollution cigarettes?

I must confess to feeling torn. BoingBoing is about doing your own thing. An it harm none, do what thou wilt shall be the whole of the law. If we disregard the risk from passive smoking while on a marathon, this is harmless except to himself. He is not advertising. He doesn’t seem to be suffering. Has he not Boing? But it all seems so wrong.

Congratulations, Uncle Chen. BoingBoing salutes you. Well, most of us. Pretty much. I think…

Years ago, when I was living in Japan, I would join some 10k runs. Most runners were middle-aged men, who were chain smoking right until the gun went off (just a cap gun), they stamped out their cigs, and burst off running, often faster than my run. I dunno…maybe I should be picking up smoking to work on my running. I’ll be giving my lungs quite a workout.