A billion pounds of California almonds are stranded at facilities

Originally published at: A billion pounds of California almonds are stranded at facilities | Boing Boing

Oh my gosh, what’s our squirrel going to do? He eats that many every couple days.

The problem, according to the article, is that oceanic carriers can make more money sending empty container ships to Asia to load up on export goods instead of waiting in California posts to be loaded with almonds.

Almost sounds like growing a water intensive crop in the middle of the desert is a bad idea. But that would be unpossible!

The glut of almonds has led to record low prices in the US — $2 a pound.

Sorry, can’t help you there. I hate almonds.

It still baffles me that, in the middle of a major drought, we’re still exporting significant quantities of our water in the form of almonds. Or not, at the moment.

I thought it was supposed to be the most efficient and rational way of allocating resources (for whatever purpose is in mind).

Obviously the only purpose of neoliberal economics is maximal profit. Nothing at all to do with ‘people’ and only to do with ‘goods’ in so far as they are tokens for/of whatever ‘efficiently rational’ activity is cunningly devised.

I certainly feel for the farmers who this is going to hurt. But a little part of me is hoping it spurs changes in our agricultural practices where crops that are so water intensive are moved to places that actually HAVE excess water.

Sorry, that makes too much sense, just ignore me. Go on with the profit taking (or, in this case, the not so much profit taking)

I did the math. 1.3 billion pounds represents 2.5 trillion gallons of water.

Per the USGS, the flow rate of the Colorado River at Lee’s Ferry Arizona is about 8,000,000 GPM. So 2.5 trillion gallons would require 100% of the river’s flow at that location for 214 days straight. The total annual crop of 2.8 billion pounds couldn’t be satisfied with the entire annual flow from the river. Yeah, seems like an imprudent crop to be growing during a drought. (Or ever, in this state)

Almost sounds like growing a water intensive crop in the middle of the desert is a bad idea.

Alfalfa, almonds and rice - three of the most water intensive crops all sucking up precious water in a semi-arid state stricken by a 1000 year drought. Over 80% of the Alfalfa - a crop used mostly to feed livestock - grown in California is exported to Saudi Arabia and UEA.

Just limiting these crops from export alone would increase the amount of available water by more than 10%. 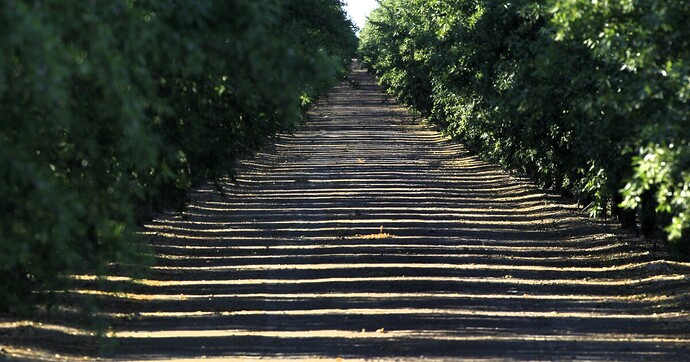 Chris Reed: Why drought should have California's almond, alfalfa farmers...

It's perverse that so much California water goes to feed animals whose methane emissions add to the climate emergency.

How much water does it take to produce a pound of almonds? A staggering 2,000 gallons. If California only produced enough almonds for the United States, than it would have about 8 percent more available water. If California only produced enough alfalfa for the U.S., it would have at least 3 percent more available water.

Maybe CA, AZ, and other states hit by a drought that equates to the one that destroyed the Ancestral Pueblan civilizations ought to consider growing things not quite so water intensive. Or learn xericulture.

Has the price of almond and almond-related products decreased as a result? (I’m thinking no…probably have gone up cuz “inflation”.)

…and my guess for what will happen to this excess inventory? Animal feed…

Can we just turn the almonds back into water?

I’m doing my best to turn them into poo…

So why does one always find peanuts, but never almonds or Brazil nuts?

I know! Let’s grow them in a fucking desert!

In other words want farmers in CA to use less water, change the law, so that if they dont use it they can still keep their water rights. That way they wont be forced to use it, in case they need it in some far off future

Can we just turn the almonds back into water?