A Jew and his sandwich

Bloom’s in Whitechapel. Now gone to the great provider of Kosher restaurants in the sky. I believe the unique social circumstances which created it mean that we will never see its like again, surly waiters, wonderful beef and all.

Also gone and much lamented, my one time neighbour and bespoke tailor Jacob Glicker. For six years I was well dressed by a man who even his staff loved. I’m sorry, but standard basic business issue Hugo Boss just doesn’t cut it, and London bespoke prices are now silly due to ridiculous rents.

Glicker closed?? East London is going to hell in a (mass produced) handbasket.

Glicker closed?? East London is going to hell in a (mass produced) handbasket.

Rein’s Deli in Vernon, Connecticut, just off I84. www.reinsdeli.com. It’s a required stop if traveling between Boston and NYC.

Hymie’s Deli in the near-north suburb of Merion is fantastic–all you can eat pickle bar, and the pastrami sandwich had a good four inches of pastrami heaped on it. Now I’m in Berkeley, where Saul’s offers a tiny scrap of organic meat for $17. Blech.

Is Manny’s expensive now? I used to go about ten years ago, and it seemed pretty cheap back then.

"Sandwich’ is the only religion I will belong to, ever.

thank you - this is a beautiful article, full of positive message, no media hate, no us-v-them, just a lovely quest for a delicious sammich.

thank you, it made my day!

In Toronto, Katz deli by Yorkdale or Yitz’s at Eglinton & Avenue make great Pastrami. Though around here it tends to be easier to find Montreal Smoked meat.

Both of which are also available as Poutine toppings, of course.

I wacky concatenated this and the next headline as “A Jew and his sandwich, an amazing tale of inter species friendship”

Thank you! I was scrolling the comments, looking for Langer’s. Yes, it’s the best, partly because of their incredible rye bread. If you like a real production, order a sandwich to take away, to eat later. They package the pastrami separately, so that you can heat it up. But if you’re in LA, also try Oinkster, which is a “slow fast-food” restaurant. Excellent pastrami, which of course they make in-house. As for Katz’s, feh. Never tried the pastrami at Sarge’s… will have to next time I’m in NYC.

Maybe there’s one in Chicago, who knows?

Asked by an author named Kaufman… Answer from Chicagoland would be Kaufman’s Bagel and Deli in Skokie!

Link leads to their Jersey Bypass… 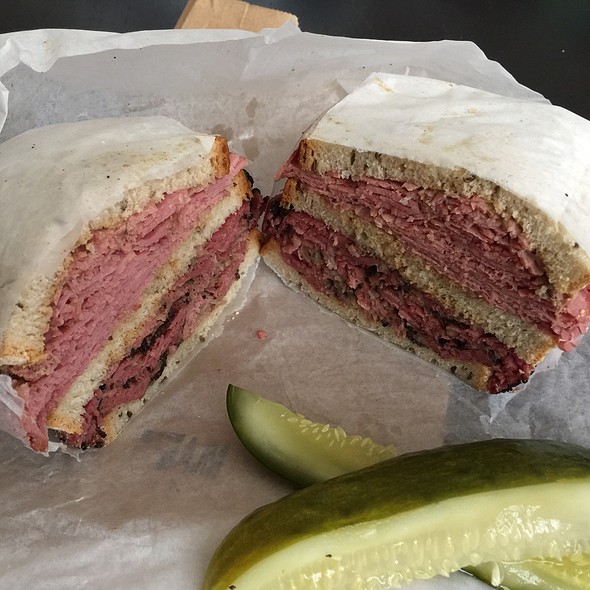 Thin-sliced to-order corned beef and pastrami packed into a double decker of rye with a thin schmear of spicy brown mustard from a real Jewish deli. What's not to love??

Ok, but can we agree that the blintzes at Kiev, down second and across the street from the original are better than at 2nd ave?

What, no love for the Parkway Deli in Silver Spring? Great pastrami and an all-you-can-eat pickle bar!

I’ve tried the Oinkster in Hollywood when they first opened, and I was unimpressed with their meat, which was incredibly over-salted. Hopefully it was just a hiccup, but the memories of the greasy and overpriced salt lick haven’t inspired me to try again, especially when Langers is so very, very delicious. There’s also the new place in Grand Central Market that’s supposed to be amazing, but I haven’t felt like dealing with the line to try it yet.

I’ve been a vegetarian for decades, and veggie pastrami really isn’t an adequate substitute. (Pastrami’s nice, but I grew up with the Philly-area Italian hoagie sandwich meats instead, and only occasional pastrami or corned beef.)

There may not be any good Jewish delis in DC, but are there Armenian ones? The drive-in pastrami sandwich places in LA are mostly Armenian, and my wife thought they were pretty good last time we tried one.
Also, is there still a deli in Crystal City? Back in the 80s, I used to get whitefish salad sandwiches when I was working there.

I got into an argument about this online once–there is a large contingent that only accepts Russian dressing with caviar as Russian Dressing. I called them elitist capitalist swine. No, it did not end well

You can if you have a time machine, Kiev closed fifteen years ago. You’ll have to hit up Veselka these days.

It’s healthy, it’s got broccoli on it. 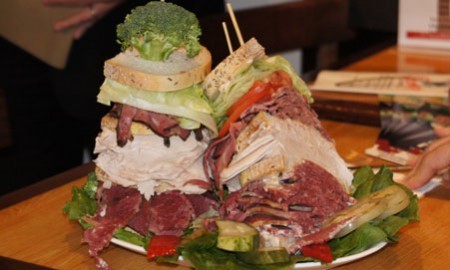 I once had a friend call me up and say he was in town, I’d just had lunch so wasn’t hungry, but agreed to meet him at his typical first stop, the Carnegie. I arrived after he’d ordered and when I informed the waitress that I wasn’t going to be eating was given a sideways look through the remainder of the meal with reminders every time she stopped by that there would be a charge if there was any sharing.

That was literally the last time I was there. It’s too easy to find a better sandwich without the long lines, expense, and suspicious waitstaff.

I also like Ben’s, over on 38th and 7th, but my typical lunchtime haunt is the very stylish counter at Eisenberg’s on 5th and 22nd. Come for the pastrami, stay for the lime rickeys.