A quarter of US military "sees white nationalism" in the ranks

An Air Force staff sergeant wrote, “You do realize white nationalists and racists are two totally different types of people?”

As a vet, I can attest to this. One of my drill sergeants in basic training had a numerous suspicious tattoos including a spider web on his elbow, which indicates that the wearer has committed murder for the cause.

The fact that nearly 20% of white service members acknowledge the issue is the most striking statistic of all. That so many white, predominantly male, people recognize it means it is far worse than advertised.

A survey by the Military Times found that nearly a quarter of US servicepeople see “white nationalism” among their peers, and believe that the white nationalist agenda is more of a national security threat than “Syria, Iraq and Afghanistan.”

I probably would have phrased this as “over three quarters of US servicepeople are either dumb, racist or not paying attention.”

The link to the original article apparently no longer works.

ETA: Ah, just had a little schmutz attached to it: 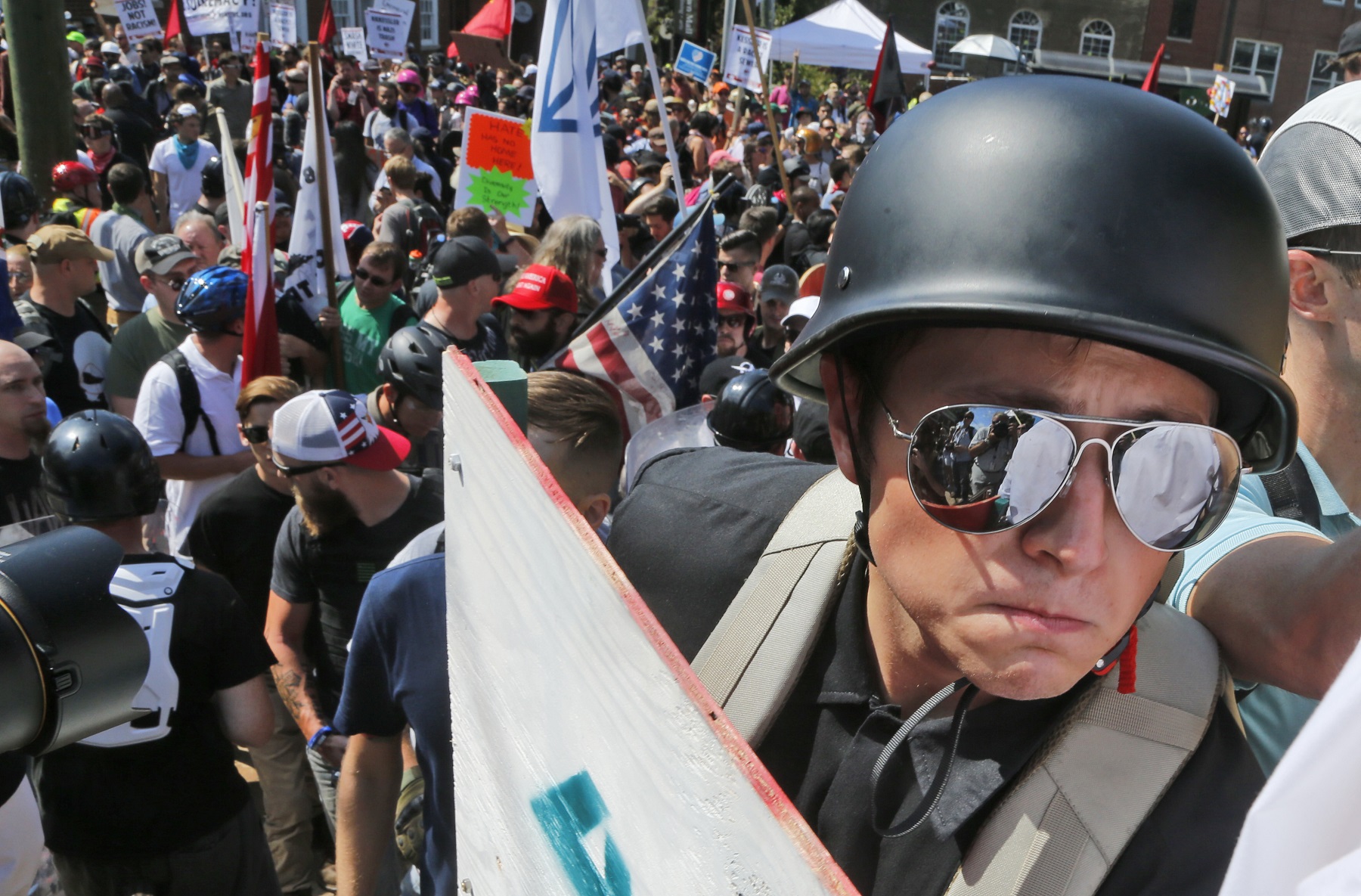 One in four troops sees white nationalism in the ranks

The figure was even higher among minorities. Nearly one-third of troops surveyed see the problem as a national security threat.

Of course at the time that photo illustrating this post was taken, the US armed forces were explicitly segregated. There were very few black MPs at that time, although I actually worked with one of them in the 80s. He ended up with 50 years of federal service before he retired.

As a Sailor I saw racist bigotry daily, it was totally tolerated and encourage by superior officers.

Alt Header: “Three quarters of the US military comes from areas in country where white nationalism is rampant.”

Or it could be that overt racism is rare in the military. A quarter see it, suppose another quarter can’t see it right before their face. But there could also be a lot who really only encounter decent people from day to day. I have several military in my family, and while they may not be the most progressive lefties, they really do treat others with respect.

Its possible of course. But I wouldn’t have expected there to be enough mixing of people within the military to end up with as many as about 1/4 encountering a rare occurrence. It seems odd to me. It would need to be really rare but totally obvious and highly visible (in which case why aren’t those behind it stopped and dealt with?) or common but less obvious (so everyone encounters it but not all realize).

I suspect the underlying situation may be similar in frequency, visibility, and distribution to sexual assault and harassment in the military. And maybe for not-totally-unrelated reasons.

Very disturbing. The Air Force has also had a Dominionism problem for a long time.

In related news, White supremacists have also infiltrated law enforcement departments across the nation, so we may be in big trouble.

May be? I think you’re well past maybe and deep into neutronium density ordure.

a spider web on his elbow, which indicates that the wearer has committed murder for the cause.

I’ll grant that perhaps this was the case with your drill sergeant, but a spiderweb on the elbow (other joints, shoulder is common too) has a general meaning of entrapment- as in, the wearer has felt bonded/enslaved/caged, be it physically a la prison time (web lines indicating years served) or a mental health facility, or more meta, i.e identity issues, or general life circumstances like say growing up with an abusive caretaker or being addicted to drugs.
A friend of mine has a spider web on her elbow marking the time it took her to transition. Mine reflects my apathetic early adulthood, couch surfing, squatting, burning out.

Historically speaking, the spider web originally implied prison time, but not just for murder, really for anything. I suppose it was just another quick way to identify yourself to other cons, a business card of sorts…
But yeah, like many a symbol it has derivated countless times since origination to the point where any one persons’ spiderweb tattoo means nothing to you, and everything to them.

Also, that SPLC link, while getting some of the easy, obvious ones like rahowa or 1488, wildly oversimplifies or outright miscategorizes many of the other examples, particularly concerning skinhead culture which is not inherently racist.

This is a better link, anyway, though I’d hesitate to call it as authoritative as the title suggests.

A Complete Dictionary of White Supremacist Slang and Symbols

The swastika isn't the only neo-Nazi signifier—here's your complete guide to white supremacist iconography.

It seems odd to me.

The radio check is coming from inside the TOC https://t.co/zvJTQm05Hy

An Air Force staff sergeant wrote, “You do realize white nationalists and racists are two totally different types of people?”

Alt Header: “Three quarters of the US military comes from areas in country where white nationalism is rampant.”

Which translates equally well to: “… comes from the United States:”

These guys mostly work in tech.