I didn’t think silos were that structurally sound where you could add all that weight up there. I imagine there is some reinforcement going on.

The old one at the farm next door blew over in a high wind. I wouldn’t even want a house next to one.

Actually, a similarly motivated man built one such a Wizard’s Castle near my house along the bike path back in the 1940’s: 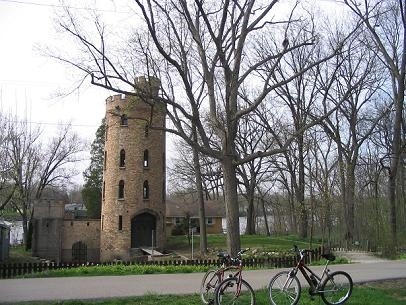 (It looks a little different now: the current owners have been building up a wall around it the last couple years, presumably to defend against Zombies.)

There’s a bazillion ways to build a silo, it can be as strong or as weak as you want. Wikapedia has a good article. I’ve seen silos that were apparently made with a single concrete pour, as well as the regular concrete stave type, and some of the ones up in the Amish area here are a fired and glazed ceramic brick that’s probably sturdier than mortared stone. If you make it to last, it’ll stand 200 years easy.