I’m going to make an effort to show this to everyone who ever told me to just not think about negative stuff and be happy.

I won’t succeed though, because that’s way more people than I could possibly track down.

Don’t be so negative. 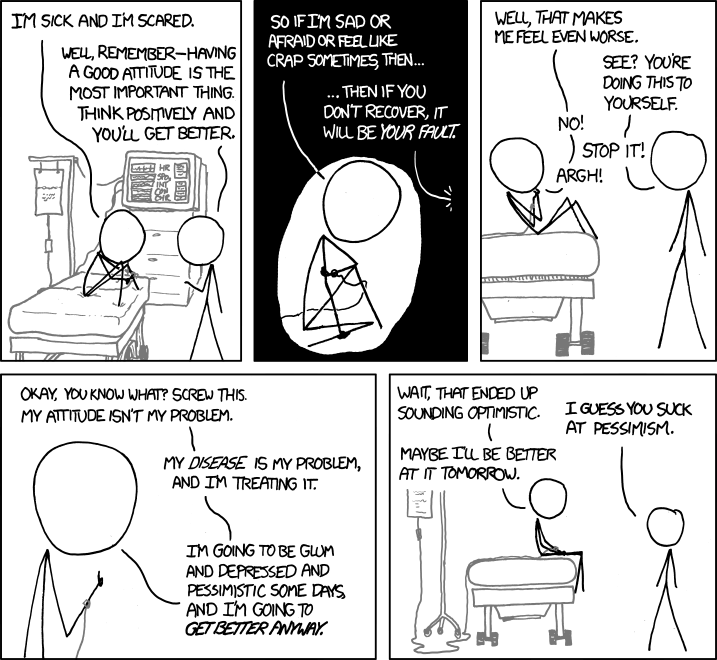 Having a positive attitude is almost tautologically good for your mental health, and extreme stress can hurt your immune system, but that doesn't mean you should feel like shit for feeling like shit.

Hey you should check out this cool article:

What if you feel bad about feeling good?

That sounds a bit like clinical depression, or one of the stages of grief

By contrast, those who generally allow such bleak feelings as sadness, disappointment and resentment to run their course reported fewer mood disorder symptoms than those who critique them or push them away, even after six months.

I didn’t read the linked article but I did read BB’s excerpts, and this sounds like Yet Another Study where cause and effect could be either direction, or they could both be downstream from some common causal condition.

can we have a link? or at least the title?

I agree about the cause/effect problem, but the study does resonate with my own experience. I once attended a session for people suffering from sleep anxiety (using a technique called “Acceptance and Commitment Therapy for Insomnia”, feel free to google it). Basically, following an episode of back pain that had prevented me from lying down, my brain was associating going to bed with being in danger. So I was getting no sleep even after my back problem had been solved. It was becoming a serious problem and I was rocking the vodka, pills and things to deal with it.

One of the pieces of advice they gave us in the session was to “welcome” the anxiety when it came. I found that helped quite a bit. So I began to personify my angst about sleep as a sort of pitiful, lonely child who needed to be loved. There was a while when I almost looked forward to its arrival at night so that I could pet it and make it feel better. Then, gradually, it ceased to arrive and I could finally sleep OK.

Little fucker took about a year to get out of my head though.

It looks like it’s this one: “Let it be: Accepting negative emotional experiences predicts decreased negative affect and depressive symptoms” https://www.ncbi.nlm.nih.gov/pmc/articles/PMC3045747/

The article has a fairly complete list of study limitations. That said it does suggest that its a bad idea to beat yourself up for having resentment or depression or frustration. Better outcomes to accept those feelings. Buddha made this point a few years back and some people have benefited since then.

Sometimes I just accept my inner anger…it makes me happy.

One of the pieces of advice they gave us in the session was to “welcome” the anxiety when it came.

Works quite well, in my experience.
Welcome your usual inner demons like an obscure relative that crashes at your house in the middle of the night, eats everything in the fridge, leaves a mess, and is insulting all the time. After a while he’ll1) either gets bored and leaves of his own accord, or you’re fed up sufficiently to make him go away.
You know he’ll be back. But you also know that you’ll be able to handle it when he does.

The greeks had it all figured out 2000 years ago with stoicism, no study needed. Isn´t that amaizing? Read Epictetus´ handbook to find practical advice on how to get there in daily life.

Depending on the kind of rain I can truethfully say rainy days can be quite beautiful.