In restrospect it should have been obvious, but just the other day I finally learned that Harmon and Roiland were also behind the short-lived “House of Cosbys”. 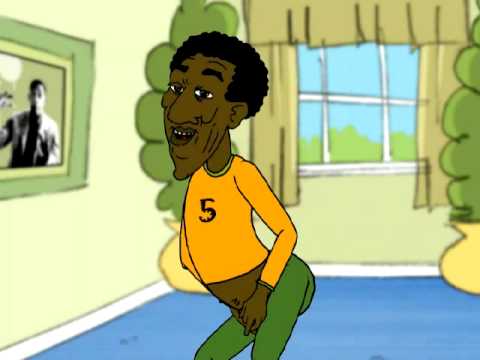 It isn’t the same re-watching it now that the revelations of Cosby’s horrible crimes have emerged, but it’s still funny if you like their sense of humour (it even has an early version of interdimensional cable) and it really got under Uncle Pudding Pop’s skin at the time.

aliens with big round heads, doing incredible mundane human things, and commenting them with just enough distance and a thesaurus touch to make these everyday events seem hilariously bizarre and, well, alien.

I think the old “Coneheads” sketches on SNL were the first to use that gag (i.e. eating “shredded swine flesh and chicken embryos” for breakfast) but this comic certainly makes delightful use of it.

I really don’t understand why certain things get (ostensibly) adapted for tv/movies. There have been a number of tv shows lately that claimed to be based on an existing “property,” but jetisoned absolutely everything in the source material - narrative, characters, setting, mood - until all that was left was the glimmer of an idea contained in the original story (that might not have even been central or unique). This being a prime example - it already is the format/length it needs to be, to be perfect, and doesn’t even have the pretense of narrative or characters. It doesn’t lend itself to being expanded out into tv show length - you can’t stack a bunch of comic strips together to make a narrative, and even if you take a comic, stretch it out and fill in the gaps with new material, 99.99% of what you end up with is not this comic.

All you can do is make something completely different that just happens to have aliens that don’t understand/describe literally human customs and activities. Which, as pointed out, isn’t unique to the comic, so why even pretend it’s an adaptation.

I really don’t understand why certain things get (ostensibly) adapted for tv/movies.

At the moment it’s because the streaming services are desperate for content that will get people to subscribe. They’re handing out deals to anyone who’s shown they can follow through consistently on putting out creative work (even if their work isn’t TV or movies).

Well, that answers the question of, “why is this tv show being made,” not “why are they pretending the show will be based on this thing it obviously can’t be based upon.”

In some cases I can understand it - the media conglomerate already owns the rights to e.g. a comic, and it goes through a corporate adaptation process. Someone notices it could lend itself to an adaptation, so either someone gets excited about some aspect of it and makes a pitch or it gets handed to any hopeful show creators looking to work with the network, then a bunch of executives have notes that totally transform it, and it eventually becomes a police procedural, no matter what it was to begin with. Or, as you say, a non-tv-writer breaks in based on their other work, and either does something unrelated to what they worked on before (which is normally something which shows they can write narratives), or tries to adapt something they did (and it ends up as above).

But this is less comprehensible to me, as it clearly doesn’t lend itself to adaptation even to begin with. The end result having no relation to the source material won’t be a result of corporate meddling, but the inherent nature of the thing.

I think the answer is: you have a built-in audience. Adapted properties become a safer bet for a studio that way. A TV show about anthropomorphic tortoises who have been genetically modified and trained in martial arts is a gamble. Ninja Turtles guarantees at least some audience.

Yeah, that usually plays a part in adapting things*, but sometimes “properties” that were pretty obscure get adapted, too. I can’t imagine “Strange Planet” has that much of a reader base - certainly not compared to the number of people required to keep a tv show on the air. Maybe these days tv and movie developers are so desperate that the extremely tiny marketing bump from adapting fairly obscure material is enough to make it worthwhile to pretend.

*Which makes wildly diverging from the source material that much more inexplicable - it’s like the strategy is to use the name recognition but target people who have only heard about it, not actually read/seen it.

The film Mystery Men had fuck all to do with the Flaming Carrot and Mystery Men comics, which was disappointing. Tom Waits and Eddie Izzard helped, tho.

It vaguely had the same premise (off-beat superheroes) and a few characters had at least the same name as their comic book counterparts, though? Unlike some adaptations I’ve seen, which have no characters in common, different premise, different setting… It’s been especially severe with comic book-to-tv adaptations in recent years, as network execs always want to turn them into police procedurals.

“The Walking Dead” took a while to adapt because early attempts were stymied by the network insisting it should be a police procedural. The iZombie comic was about an amnesiac young woman who is a zombie working as a grave-digger and has various supernatural friends with whom she has hijinks and faces supernatural threats, culminating in fighting off a Lovecraftian cosmic horror out to destroy the Earth. The tv show was about a medical student who becomes undead thanks to some chemicals, who helps the police solve crimes. The “Lucifer” comic was about the devil coming to Earth and various interactions/adventures he has with other mythical beings - the tv show was about the devil coming to Earth and helping the police solve crimes. A few years back there was a “modern day retelling” of Frankenstein in development. The end result, the name of which I forget, was about a guy brought back to life in a constructed body… who helps the police solve crimes.

And those were honest attempts to adapt something. Unlike, say, “The Lawnmower Man” movie that baldly paid King for the rights to a short story about a murderous satyr just so they could have a marketable connection for their completely unrelated movie about VR and smart drugs. King sued to have his name removed from that thing, though…

The end result, the name of which I forget, was about a guy brought back to life in a constructed body… who helps the police solve crimes.

Upon typing that, I realized it actually described a number of different movies/tv shows. This particular one - Second Chance was the name - was distinguished by being explicitly a Frankenstein adaptation during development. In the end… well, a character was named “Mary Goodwin,” presumably a reference to Mary Wollstonecraft Godwin, but other than that…

So last I heard the creator of this comic was pro life. Sounds like he still is, but he was too.

Now I’m kinda shocked that we don’t have PVP or Questionable Content or any of the other longest web comics being made for TV.

See everybody. There is a reason for Apple TV+ to exist. /s.

The Lawnmower Man was a pretty dope film though

Yeah, it was just sad they needed to pretend it was an adaptation. Though I still remember they used a line of dialog from the story, something like, “They found his head in the birdbath,” which makes it a more faithful adaptation than some others.