After violently dragging a passenger from overbooked flight, United Airlines apologizes to everyone else

How would I summarize America’s downfall with one image?

I can see these in United terminals with Oscar’s face pasted on top and filled with enema kits or salad boxes with bats in them.

I’d absolutely hope I’d literally stand in the aisle and block this travesty from occurring.

They’d just give you brain damage via whatever handy surface was available to them.
And escalate from there if you resisted.

This article explains it:

At the end of the day, bad brand image or not, many people are going to continue to buy their airline tickets based on metrics like the lowest price or the best arrival time, social media expert Swan said. It’s not like Chipotle, for example, which has to fight to win back customers after its E. coli fiasco.

“Tomorrow we’ll be talking about something else,” Swan laughed.

This is a bad situation made worse by over-zealous security and poor handling of a fairly standard IDB (Involuntary Denied Boarding) situation not to mention another PR disaster for United.

Not apologizing for United but there are some additional facts that help to frame the situation:

The crew members that were given seats were “dead-heading” in order to work another flight. This is deemed as an operational priority and the airline has the right to deny boarding to other passengers in order to accommodate working crew. These rights are spelled out in the Contract of Carriage (CoC) that every airline passenger agrees to when booking tickets.

Bottom line is the airline will make compensation offers to entice voluntary compliance (it was reported that offers up to $800 were made but they still needed 4 seats) but if not enough people take the offer then the airline is within their rights to involuntary deny passengers and remove them from the flight as needed. Usually it is decided by random choice or by a combination of airline status and fare class. Basically no-status and low fare passengers would be at the top of the list to be bumped.

Now, this is not an unusual situation and normally there’d be unhappy but otherwise cooperative passengers who would be kicked off and given compensation for their trouble. Usually a good chunk of money (up to 400% of original ticket price or max $1300 one-way) plus accommodation on a later flight and hotel if needed.

This is where everything went wrong because this guy didn’t want to give up his seat and didn’t accept that he was being bumped. I can certainly understand that but it sounds like he was basically being obstinate about it. That’s when security got involved and it all went downhill from there.

United fucked up (again) by letting the situation escalate out of control and there is absolutely no excuse for violence and forced removal. This is yet another self-inflicted PR gunshot for United and they should have handled it in the gate area before anybody actually got on the plane.

However, I am going to introduce some controversy here by claiming the passenger also bears some responsibility by not being reasonable and agreeing to walk off the plane as instructed.

Not defending the actions taken by security at all - just trying to help folks understand that there is always more to the story than the sensational headlines.

By the way I didn’t know about this, but you can be compensated for cancelled flights - I’m not sure how it works with US but certainly flights to Europe and there is a German

European rules are much stricter than in the US but they still allow involuntary denied boarding situations. EU law has much higher compensation and tighter time frame windows compared to US. http://www.airpassengerrights.eu/en/denied-boarding.html

Because apologies are the best!

Or maybe it’s the determined action that people appreciate, I don’t know.

Here’s the strange thing to me: As the unconscious passenger is dragged down the aisle, damn near everyone on the aisle has their phone out recording this violence. Nobody stood in the aisle (a la @orenwolf), I didn’t hear anyone shouting “THAT’S BULLSHIT” or something similar (although the audio isn’t great), and if the cops are not even willing to question themselves after it’s clear the guy is out cold (“hey, I think we knocked him out–let’s get a stretcher or whatever…”). Combined with the stock price’s lack of descent, that seems to indicate a Whole Lotta Fucks Not Given.

Taking a video and sharing it online is certainly one way of protesting this sort of behavior, but it’s not exactly immediate, and it’s certainly not helping the guy being dragged down the A/C walkway. So why didn’t anyone step up to help this guy, other than shooting a godamn video of it?

OK gang, let’s do this: https://twitter.com/UnitedSorryBot

I think that videoing is the go-to protest against cops and cop-like figures. Getting physically involved is the kind of thing that gets you thrown into jail, whereas filming the event is the thing that gets goons fired, and in the best case costs their employers millions.

If I was the CEO of any other airline, here’s the statement I would be making today:

I was appalled at the video. While we might rarely need to ask for volunteers to give up seats, we would never, ever let it get this far out of hand. A small additional increase in the incentive offered should have resolved this situation, and we would have continued increasing it until someone accepted. I promise you that’s how it will always work at my airline.

Well, you already only fly on them because you have no choice. This didn’t change anything.

#AltUnitedCEOApologyBot apologizes for this unauthorized grovelling.

I get that, and the “time shift” of video allows some level of anonymity (cover) for the people speaking up against this sort of behavior. But that comes later, by days/months/years? and there’s still the guy being violated.

United’s COC has the following definition for oversold flight:

Oversold Flight means a flight where there are more Passengers holding valid confirmed Tickets that check-in for the flight within the prescribed check-in time than there are available seats.

I don't think that adding UA personnel passengers qualifies as an oversold flight. Rule 21and Rule 24 cover situations that may lead to involuntary bumps -- I don't see "need seats to transfer UA personnel" in any of those scenarios. I suppose they could argue that the need to transfer the UA personnel was an unforeseen circumstance, but that seems a bit dodgy.
10 Likes
shwonline 10 April 2017 18:11 #35

United CEO Apology Bot will remember your contrition during sentencing.

First, they came for the passenger in seat 20F, and I did nothing.

Alt United CEO Apology Bot will see you in court. Thanks for coming!

I look to America and see a whole citizenry becoming Presidential:

What it's like being a reporter, summarized in five lines buzzfeed.com/aliciamelville… https://t.co/2PXAhp937x 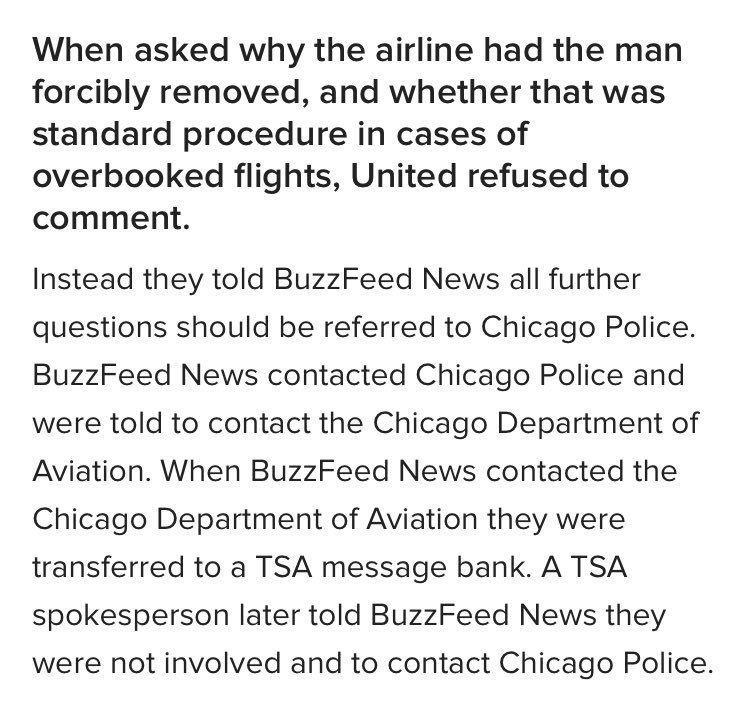 "However, I am going to introduce some controversy here by claiming the passenger also bears some responsibility by not being reasonable and agreeing to walk off the plane as instructed. "

With respect to you, maybe it’s better if airlines get their act together and work out schedules like this in advance so they know how many seats they need for crew etc and keep a couple in reserve for last minute whatevers.

Might be time for people to stop being reasonable when treated as disposable objects to be shuffled about at the whim of a company they paid good money to to receive services.

It is not the passengers’ duty to fix problems the airline caused itself.

The staff there was bone stupid. They, as others have said, could have upped the ante…most of the time they give out vouchers that cost them effectively zero and just offering more of that, sooner or later someone would volunteer. Hell offer a couple of free upgrades to first or something on a long haul and there’d probably be a stampede of volunteers.

The fact that this happened after passengers were seated means someone really f****d up in their planning. or simply decided the cattle needed no respect and it need be could be beaten into submission as we now see.

Going to cost United a ton of money even if they prevail which is one more indictment of their stupidity.

I’ll give one concrete example; I will not fly United now for some time to come and will be cancelling my United credit card… That’s a direct, attributable cost for their actions that can be measured.

Will they care? Not one whit because corporations are inherently stupid.

Taking a video and sharing it online is certainly one way of protesting this sort of behavior, but it’s not exactly immediate, and it’s certainly not helping the guy being dragged down the A/C walkway. So why didn’t anyone step up to help this guy, other than shooting a godamn video of it?

I’m sincerely hoping the reason is there’s more to the story than this, because otherwise the answer to your question is 1) This happened exactly as described, for the reasons described, which is deplorable and 2) indicates to me that the Kitty Genovese effect was in full force.