Amid a media blackout of the Standing Rock protests, law enforcement targets the rare journalists on the scene

What was that about Fidel Castro not dying till America was destroyed, again?

I am grateful that there are people willing to report on what is happening out there.

For more details on the situation at Standing Rock go to:

It does also appear that there was some cellphone hacking that went on at the camp. There is a yellow helicopter in the video that flies over the camp well below the FAA minimum altitude regulations that can also be seen regularly at the protest action locations.

Some protesters will attempt to design fictitious media credentials to gain access to events or special consideration by law enforcement.

Special consideration like what? Do journalists have special rights? Like… not getting your head smashed at a demonstration? Do we not all have this right?

Free speech zones? I want my liberty back.

Same thing has happened at Black Lives Matter protests - law enforcement de-legitimized members of the press and called them protesters pretending to be press to justify arresting them. But it obviously wasn’t the case, because this was being done to mainstream reporters from newspapers, radio stations, etc., especially if they were black or looked black to the cops. These actions reveal so much about the political agendas of law enforcement.

I am grateful that there are people willing to report on what is happening out there.

Ethical journalists still exist, despite what you might think from much of the US and UK media.

Ethical journalists still exist, despite what you might think from much of the US and UK media.

That’s what puzzles me, the mainstream broadcast news outlets really are a vast minority in the landscape of “the media”. It seems that in the 21st century, as a connected society, most of us are now the media.

Make sure you’re applying nationwide pressure to the banks financing and managing the books of DAPL.

The band Fatima Mansions have got you covered… rich man’s militias.

It’s always been like that. The bringing in of drink driving and seatbelt laws in the UK caused a revision of the attitude of a lot of people to the police because up until then they had seen the police as the defenders of the middle and upper classes from the lower classes. Suddenly respectable people, people like us, were getting convicted.
The difference now is that the point of inflection at which the police become pro-public is moving up the wealth scale. During the 1968 Grosvenor Square protest against the Vietnam War, an attack by mounted police on a group of demonstrators stopped when a young woman shouted, in a very U voice, “My father is the Chief Constable of ___shire and he isn’t going to like this.” Nowadays, I don’t think it would have any effect. Editor of the Daily Mail, perhaps.

The best way forward is to advocate for all people to have the right to be journalists, not to try and create some bright line between journalists and protestors with “credentials”. Arrests of Journalists at Standing Rock Test the Boundaries of the First...

Members of the Unicorn Riot media collective, which specializes in covering protests, have been arrested repeatedly at the Standing Rock demonstrations.

Oh! Haven’t seen that meme in a while! Good one!

The best way forward is to advocate for all people to have the right to be journalists, not to try and create some bright line between journalists and protestors with “credentials”.

I personally cannot stand credentialism; it always strikes me as a bunch of entitled “haves” with minimal self-awareness pulling the ladder up behind them.

Don’t get me wrong, I understand why it exists in some fields. I think that this is an important underpinning of some professions like medicine and skilled trades.

At the same time, though, the act of achieving certification is a barrier for many people who would otherwise be qualified to do a job. Even formerly entry level positions now require multi-year coursework and thousands of dollars worth of income and personal time just to prove simple things like “I can fix a computer” or “I know how to receive and respond to emails”.

This is in effect a direct comment on the kinds of people we want to have doing these jobs. If you are of limited means, you are effectively not part of the equation.

This seems especially concerning with regards to journalism; it would effectively constrain the types of people who are allowed to report and the perspectives they bring.

Can’t afford to spend 40,000 on a journalism degree plus an annual fee for membership in a professional association? Too bad!

People really think that, though. I have a Palestinian friend who got hit in the neck with one during a protest and spent a week in the hospital. 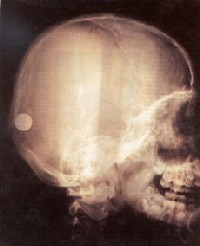 The phrase "rubber bullets" was used to describe rubber-coated metal bullets, heavy steel projectiles with a thin coating of rubber, that are regularly used to lethal effect alongside -- not instead of -- live ammunition.

This isn’t just a problem in Palestine. Some protesters were killed in Kosova years ago by expired rubber bullets:

Romanian U.N. police who shot dead two ethnic Albanian protesters in Kosovo in February fired rubber bullets with a use-by date of 1994, which had "probably hardened" with age, police said on Wednesday. A preliminary U.N. report released this week...