An appreciation for Samuel Delany

He is one of the fathers of afrofuturism

I did not know that! How cool.

Also, Ekphrastic Force is the name of my new band.

(edit after looking up “ekphrastic” in the dictionary)
We don’t actually play any of our music; we get up on stage and describe to our audience what the experience of hearing our music is like, in such vivid words that it’s as if they were actually hearing it.

Unfortunately the venues never pay us actual money, they just describe to us what it would be like if they were. 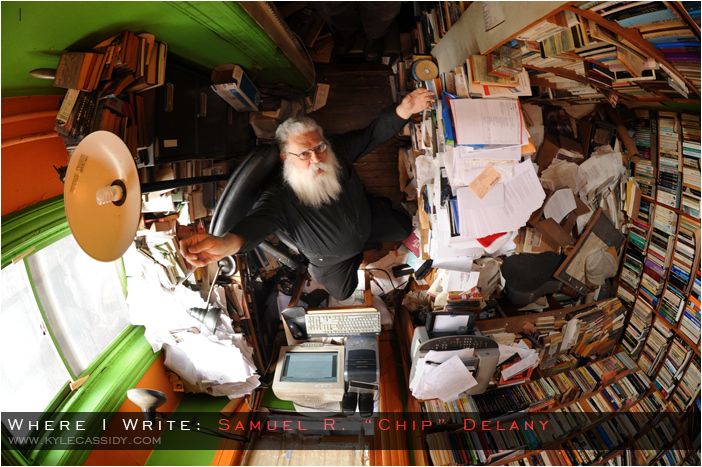 I hope this means he will gain the same sort of recognition and acclaim that Le Guin eventually got, because he deserves it.

Huh. Reading about his books, it seems meatily bizarre that I haven’t read any of them.

He is one of the fathers of afrofuturism

I did not know that! How cool.

Looks pretty white to me!

Fifty years ago when Dangerous Visions came out he was fifty years ahead of his time.
He still is.
And the structure of his stories, my gawd. It’s always perfect.

Any Delany fans with insights or links to help me understand “Dhalgren”? Read it 20+ years ago, was amazed and confused. Been meaning to re-read since…

I bought ‘Stars in My Pocket Like Grains of Sand’ years ago, figured I’d read it when the second half came out.

I have no such links, but i have Dhalgren lying on my desk right now. It’s the forth time I’m attempting to finish it.
Amazing book, yet, can’t say why. oh.

I know what you mean! Despite it’s opacity to me, it has stuck with me for decades.

My wife and I have a long standing bet as to whether she will finish Dhalgren before I finish Gravity’s Rainbow.

There will be no winner.

I loved stars in my pocket… back when I read it, hmm, maybe 30 years ago. I was so excited when I reached the end and read about the second part. And was so sad that The Splendor and Misery of Bodies, of Cities never seemed to appear in print. However, having read his reasons for not finishing the diptych, I am at peace.

I also really liked the imagery of the kids wandering through the streets in the animal hologram projections in Dahlgren! And when Triton blew up! I could go on!

I’ve been reading Delany since an age when I probably shouldn’t be reading Delany. Damn, if it he doesn’t write really well sometimes.

His first story sold was Aye, and Gomorrah.

The narrative involves a world where astronauts, known as Spacers, are neutered before puberty to avoid the effects of space radiation on gametes. Aside from making them sterile, the neutering also prevents puberty from occurring and results in androgynous adults whose birth-sex is unclear to others. Spacers are fetishized by a subculture of “frelks”, those attracted by the Spacers’ unattainability and unarousability (“free-fall-sexual-displacement complex”). The mischief-loving Spacers exploit this for amusement and money — and possibly out of loneliness and a desire to recapture their lost sexuality.

“Frelk” is used as a derogatory term by the Spacers in the story, who nonetheless engage in prostitution by accepting money to give frelks the pseudo-sexual contact they desire.

I read it about once every year or two. From, IDK, more than 20 years of doing this I’ve come to the conclusion, you are not supposed to understand it; you’re supposed to experience it. I’ve also started reading it at a random point and then reading until returning to that point. It hasn’t had any ill effect on understanding or enjoyment.

I’ve never competed with anyone (maybe that would help?) but I’ve finished Gravity’s Rainbow about 8 times and never Dhalgren. That’s not saying, however, that I think less of Dhalgren, it’s just been more challenging.

I was going to tell you how it’s a loop, but thought I should go look it up to refresh my memory.

I loved it for all the formal invention. A lot of the strangeness comes from the fact that he was exploring the idea that things needed no more justification than that they were a feature of a fictional world. Who is to say what makes sense and what doesn’t except the author?