Don’t make us send W. back to Germany.

Sheesh. Who woulda thought that German politicians would become a bunch of corrupt control freaks…wait…

Call out your guesses to how many regular, neutral ISPs will exist once this two-tier scheme goes into place.

The great and powerful dollar has spoken.

I’m surprised anyone can hear anything Merkel says, what with being buried under a huge mountain of money provided by her telecom buddies.

Takes some real talent to project your voice through all that cash.

ALL BYTES ARE EQUAL, BUT SOME BYTES ARE MORE EQUAL THAN OTHERS? I’m not sure this is a good idea.

As long as unfiltered “real internet” is still available without any restrictions, I don’t know that this isn’t an ok solution to be honest.

If other people want to buy some 3rd gen cable TV version of the internet stuffed with home shopping networks, spyware and shit, that’s fine by me. The problem is that ISPs are building their 3rd gen cable business by REMOVING features (fast, unfiltered delivery of non-prioritized data packets) from what I’m already paying for.

That could likely be addressed (in the US at least) through aggressive regulation to ensure that ISPs actually deliver the speeds that they are advertising.

It might help to compare Germany’s “regular” to America’s “super whiz-bang broadband;” they may be the same.

Don’t make us send W. back to Germany.

If we did, he’d probably give her a high five this time, instead of a frat boy “gotcha.”

Or worse, he could paint her portrait.

Well, why not . . .in the US we already have two-tiered freedom of speech, and a two tiered justice system. 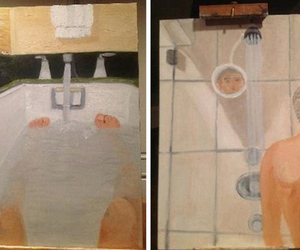 Who wants to take up a collection to pay ISPs to prioritize any other party’s websites over Chancellor Merkel’s party’s website just before the next election?

Cory, speaking personally I’m finding myself increasingly alienated by your over-heated rhetoric. Everyone you disagree with on technical policy issues is a criminal, a jack-booted thug, with nefarious cronies. This is just a cartoonish and self-righteous way of dividing the world up into the good people (who agree with you) and the bad people (who disagree with you), and I find it pretty tiresome.

Is it even possible that Angela Merkel could favor this policy for Germany without being some nefarious tool of capitalism?

I encourage you to watch “The Zero Effect” and pay close attention when Ben Stiller says “It’s not like there are ‘good guys’ and ‘bad guys’ - there’s just a bunch of guys!” This kind of moralizing belongs in your children’s books. I think you’re capable of better, and your readers deserve better.

I disagree, because Cory’s righteous wrath is amusing, and I come here to be amused. But I did notice this is not exactly the cable-company-fuckery plan, although quite similar.

What is this “Real Internet” you are talking about? No one markets that where I live. Phone service with Internet. Cable service with internet and for those who aren’t serviced by those… dial-up & satellite internet (aka: peasant level data lite,)

Where do you see overheated rhetoric in this post?