I know I keep spamming this video, but it really does I think summarize why the divide is widening.

it’s only an enormous problem if you want anything to be done about the issues at hand. If not, and all you have to do is prevent the conversation from moving forward, well, then… 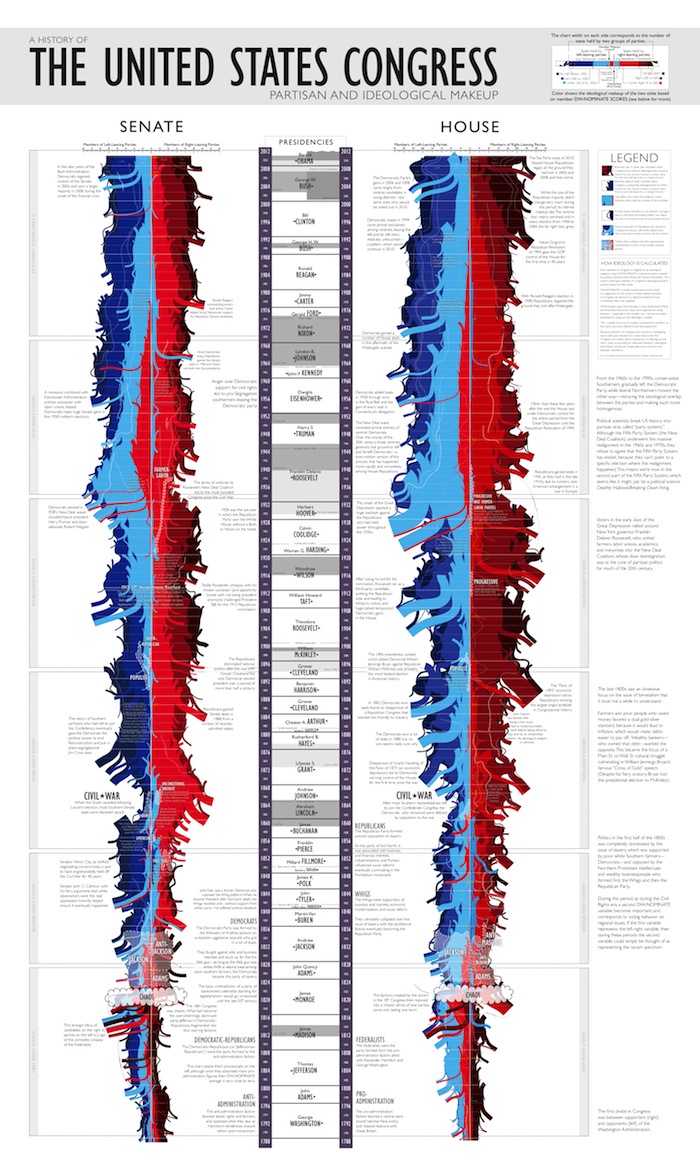 It'd be great if some news network started featuring partisan hack talking heads who were all Federalists and Jacksonians, just to see how long it took us to catch on.

I wish we had similar data for the past.

Came here to say exactly that!

It’d be interesting to see whether this degree of polarity is historically unusual - or is it the norm?

"how you feel about global warming, whether police officers use excessive force against Black Americans, or whether displays of military strength are the best method of ensuring peace"
Wait, so acknowledging and being alarmed by global warming, police violence against Black Americans, recognizing discrimination against gays, immigrants, etc. is a sign of being a leftist? In other words, reality - and acknowledging and being alarmed by negative aspects of it - shows a liberal bias? This seems to indicate not that there’s polarization, but an increasing extremism on the part of the right and a rejection of evidence and basic decency.

This seems to indicate not that there’s polarization, but an increasing extremism on the part of the right and a rejection of evidence and basic decency.

(But saying that makes you a leftist)

I’ll be super frank here, I suspect that the widening itself is creating a bit of a positive feedback loop.

Calling things people can’t personally experience or see ‘obvious fact’ and ignoring that there’s a ton of partisan efforts muddying the waters on all the above issues makes it very difficult - and I think that the current narrative of ‘fake news’ plays into this. People have a view on things, others say something different, and the administration calls it fake news. I don’t know how we pull ourselves out of this. It feels very post-modernist.

We’re supposed to treat the sides as equals but how do you treat someone with respect who won’t respect you? It’s like trying to hold a conversation with a screaming bratty child who doesn’t speak the same language as you and is prone to throw things.

Why, for instance, should how you feel about school vouchers be related to how you feel about global warming, whether police officers use excessive force against Black Americans, or whether displays of military strength are the best method of ensuring peace?

On all four the conservative position is the one that sides with the traditionally more powerful, high status, high authority group: white people, industry, law enforcement, the military. There’s some arbitrariness to the way issues group together in the US party system, but the main divide is over whether traditional power structures are good or bad.

We’re talking about things that are documented scientific facts, e.g. global warming, or just extremely well documented. 20 years ago, since it wasn’t a lived reality for them, white conservatives could plausibly deny that there was excessive police violence against black Americans. (The police denied it, and that was good enough tor them.) But now we’ve got people compiling statistics - and undeniable video evidence showing specific events aren’t playing out in accordance with police narratives - at which point the idea that maybe the police shouldn’t be murdering black people suddenly becomes a partisan issue (and not just a racist one).
The partisan efforts to muddy the waters are actually conservative efforts. Lefties aren’t the ones hiring scientists to promote counter-factual narratives on climate change, for example.
So I don’t think a positive feedback loop (entirely) explains things. White, heterosexual Christians getting freaked out by potential changes in the status quo and rejecting anything they see as potentially impacting it has a significant impact I think, however.

We’re supposed to treat the sides as equals but how do you treat someone with respect who won’t respect you?

And false equivalencies about “both sides” get perpetuated even by lefties - because they’re trying to be reasonable. But conservatives are increasingly uninterested in being reasonable (while ironically demanding it of the left)…

This is one bitter jiggly jello mold.

how do you treat someone with respect who won’t respect you?

and they think they’re being fair but they aren’t, and it’s not okay.

I know I’ve become more liberal as I encounter more conservatives. The more you take the less I want to give.

It’d be interesting to see whether this degree of polarity is historically unusual - or is it the norm?

The last time it was this polarized, it was the 1850s.

There was an awful lot of tensions and division in the late 1960s and early 1970s - uprisings after King was shot, the Wallace candidacy, a wave of bombings by the Weather Underground and other radical groups (here and elsewhere - the RAF in Germany for example), a wave of high profile airline hijackings, Watergate, stagflation, the Oil Crisis… things were pretty polarized there, too. though we now know that the polarization of the 1850s led to a civil war and the polarization in the 60s/70s did not lead there.

The Democrat far left isn’t actually the far left (how many real Marxists of any description have been elected anywhere in the US recently?) Unfortunately the Republican far right really is the far right, and they seems to be taking over the party.

Taking the Overton Window into account, I expect the graph from the article is showing that the Democrats have stayed in the same place or maybe moved slightly to the left (but not much) while the Republicans have moved dramatically to the right.

There’s a similar graphic on FiveThirtyEight’s latest article (although it’s looking at federal Members of the House of Representatives):