Anybody have more info on the Clinton/Sanders Voter Fraud issue?

I always kind of thought Clinton was just a career politician and we could never expect all that much from her…and of course even if this is completely true then it could easily have been other parties in the DNC and Clinton could have been completely oblivious to it.

But this data makes me squidgy, and analyzing data is my THING. Since this has links but hasn’t been peer reviewed I’d prefer to dual-source it before reading too much into it since it’s a pretty big accusation.

I’m also familiar with how often the only place these things get exposed is in statistical analysis, so I can’t just write it off either.

Are we witnessing a dishonest election: Study

What has my eyebrows raised the most is the variance between the polls and the results in States in which there is and is not a paper trail for the primaries. Clinton did consistently better than projected vs. Sanders when there was no audit trail, yet failed to exceed expectations in States where there was one. 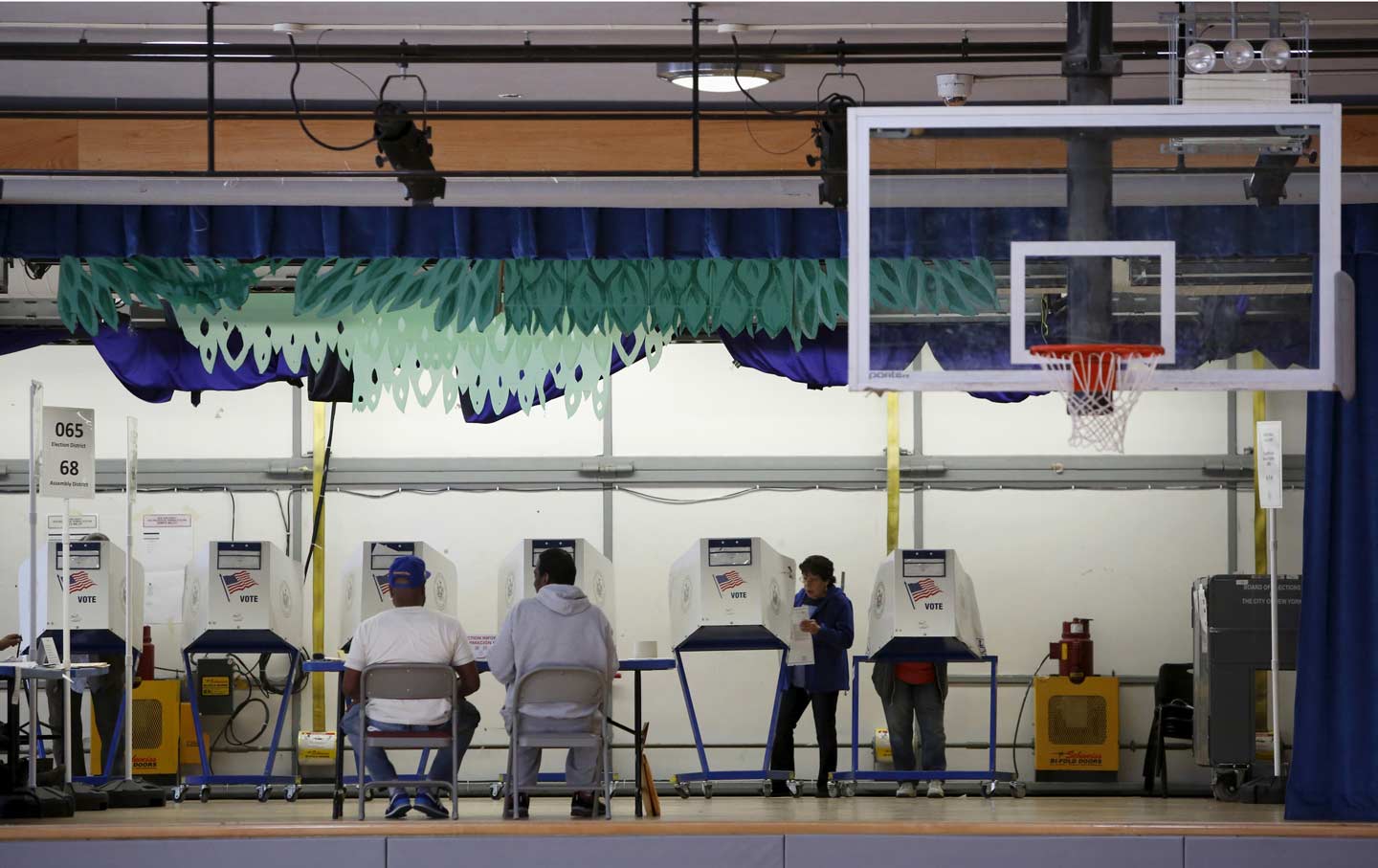 Voters have good reason to lack confidence in our election systems. But claims of widespread fraud aren’t going to fix anything.

That’s actually a really bad article and I wouldn’t lend it any credence. It’s pretty clearly written by somebody who has a pretty firm bias and a lot of those sentences are ones that I’d be horrified by if they came out of a respected peer.

1) The premise is faulty. Anything that’s true is true, conspiracies do exist, they’re just rare.
2) This isn’t technically a ‘conspiracy theory’, in fact it’s something that could have been done by a tiny number of people without anybody else knowing or being involved. (even just one who does a bit of travel!) So there’s no need to keep huge secrets or anything.
3) One can’t just assume that ‘adjusted’ means ‘cherry-picked’. That’s not a viable default state, one should understand the purpose of the adjustment and context (something the author didn’t bother doing) A large fraction of the data I work with is ‘adjusted’ in one way or another.
4) Consistent variance is one of the ONLY things we can use to look for this sort of hidden correlation, that’s a key point and is ignored in the article despite making up about 30% of the study.
5) No, our polls aren’t worse than the third world countries we investigate for voter fraud. Where did THAT come from?

This particular scenario may not be true, but they didn’t actually address it in any meaningful way. The article has no value in this context and I’d be skeptical of any future work from the author (Joshua Holland). This might be an outlier on his side, but that sort of ‘takedown’ usually indicates somebody who’s happy not to be reasonable and thoughtful in their analysis.

This is why I’m interested in those who’ve actually analyzed the raw data from another direction or independently, or who have studied this analysis with a professional detachment. We’ve got lots of wonks who’ll just see one side or the other without bothering to get to the root.

Errr, you could also just read the comments in the article. I wasn’t the only person who saw it as an unprofessional dismissive opinion piece.

Again, not saying these accusations have meat on their bones. We’ve got one source and it hasn’t been peer reviewed… but for the author to just dismiss an accusation and basically make up reasons that support their argument is SUPER reckless and irresponsible.

The man should be ashamed because he basically lied to a lot of people. (I don’t have much sympathy for people who use their platforms that way, especially when they lie about my field)

Clinton did consistently better than projected vs. Sanders when there was no audit trail, yet failed to exceed expectations in States where there was one.

It kinda blows my mind that there isn’t even a minimum of standards/due diligence, and people just shrug and accept ‘results’ from states that never even bothered to try to do a proper vote. The whole idea that closed primaries and caucuses that aren’t subject to election law could be considered valid sounds markedly absurd.

Of course, if they were disqualified and rejected, people would claim disenfranchisement. But even leaving states free to figure out the details, there could still be a set of minimal standards for clarity, transparency, and auditability.

Isn’t that what Democrats were pushing really hard for 40 or 50 years ago, forcing the Republicans to do proper primaries according to election law?

Edit: Not even going to touch on polling. Just how the actual elections are done without even trying to gather accurate/legitimate data about who people are voting for.

The whole idea that closed primaries and caucuses that aren’t subject to election law could be considered valid sounds markedly absurd.

Closed Primaries–prevent people coming into the primary and intentionally voting for the weakest candidate,
Caucuses–helps select the candidate that people are most enthusiastic about campaigning for,

Closed Primaries–prevent people coming into the primary and intentionally voting for the weakest candidate,

Hey, the California results are in! The California Primary Is Finally Over, and Clinton Still Won

Clinton's lead over Sanders was cut to 7 percent, but not reversed, after late mail and provisional ballots were counted.

That is seriously depressing.

OK. Give me a counterexample of another group that’s larger and wields more political power.

OK. Give me a counterexample of another group that’s larger and wields more political power.

I don’t think large groups wielding tons of political power is a good thing for humans, and evidence and science gives me a ton of support there.

We’re designed for small groups, and we have ample evidence that trying to get hundreds of millions of people on the same page just leads to milquetoast ‘lesser of two evils’ solutions. People are tribal and blindly side with ‘their team’ without having any need for reality to back them up (also very well studied and supported). The needs of strangers invariably fall behind the needs of ‘our people’, and we pick those most ‘like us’ over those who are less in the aggregate. That’s not a model for a civilized society.

Circling back, it also leads to corrupt processes, retardation of progression, and nations of supposedly peaceful people in which the presumably ‘non-military’ party is in power yet we’re still wasting tons of resources that could go to helping people bombing strangers and creating more terrorists.

Which all makes me wonder if anybody’s done some blind analysis of the source data I referenced in the OP and determined if there’s a reality behind that suspicious variance, and if that’s contributing to the problem (un-tangented! By ME of all people!!)

We’re designed for small groups, and we have ample evidence that trying to get hundreds of millions of people on the same page just leads to milquetoast ‘lesser of two evils’ solutions.

There might be a solution to your small groups problem, and it’s definitely not the lesser of two evils.

There might be a solution to your small groups problem, and it’s definitely not the lesser of two evils.

Then there’s at least two, because the one we’re working on is awesome, evidence based, and designed to embrace our variety. (Birth nation lotteries are kind of an absurd concept…like that has anything to do with who we are)

Some of us don’t consider low standards a good goal, and don’t give up on new things even if they’re hard to set in motion.

I’m not sure why you think that the best we can do is a system invented hundreds of years ago by a small group of men who were able to justify women being unable to vote and African Americans being a fractional human, especially when the system obviously isn’t working as intended (they did not envision a two party system, so of course the issues were not factored into their design)

Except that the parties who can do anything nationally are sort of restricted to two… It’s freedom to associate with serious limits, I’d say, at least when it comes to national politics.

Back on topic, a quick look at the data, compared with approximate state populations (from 2014 census estimates) added in, indicates a pretty clear progression in terms of % of population represented through those categories (caucus, no paper trail, paper trail). Assuming about 70% of population is eligible to vote, and about 48% are democrat-oriented (based on http://www.gallup.com/poll/15370/party-affiliation.aspx), let’s compare how many votes were counted vs the democrat-oriented eligible voting population.

Compared to https://en.wikipedia.org/wiki/File:U.S._Vote_for_President_as_Population_Share.jpg it looks as though the paper-trail primaries are pretty close to representative of % of population who vote in modern-day elections since 1940, while the no-paper trail ones are about as representative as the women’s suffrage era in the 1920s, and the caucus states approximate the era when only wealthy white male landowners could vote prior to the 1820s.

That doesn’t really address the question about the differences between polls and votes, but it lines up with the idea that there is a big difference in those categories and a pattern of discrepancies specifically in states where the vote is not representative and is designed to not be auditable would be somewhat suspicious.

Turnout rates in 2016 primaries and caucuses

This topic was automatically closed after 222 days. New replies are no longer allowed.