“Apple Watch is the most personal device we have ever created,” added Cook. “It’s not just with you. It’s on you”

“Maybe even in you, depending on how you use the vibration feature. That’s how personal it is.”

The Watch seems nice, but it does much more than I need it to and for much more than I want to pay. Perhaps if I were not invested in another ecosystem and have already sunk some money into a Pebble and a Fitbit, I might consider it, but it is not enough to make me dump those devices and switch.

(and just in case anyone wanted to call me a hater - I would say that if I were in the Apple mobile ecosystem, none of the Android Wear or Microsoft wearables would be enough to make me switch, either)

When I was a kid, a “retina display” meant a reflective display which actually projected onto your retina - rather than a dumb buzzword for a regular LCD with more pixels…

Next step the Futurama eye-phone?

What time does the watch say? ‘Os-ten-to-eight-ous’. All the fucking time of course.

“This is insane,” Schiller said, claiming thirty percent more battery life, despite the decreased size of the laptop, crediting a much smaller circuit board.

He made no such claim, and he didn’t really credit the smaller logic board (except for this allowing more battery space).

You can’t really claim 33% more battery life since there’s nothing to base this comparison on. He did say the display is 30% more efficient due to larger effective pixel apertures and shrunken pixel controllers. He also said the battery tech allowed them to stuff in 35% more batteries through their new packaging techniques. Neither of those translate to 33% more battery life than a previously-nonexistent product.

Wow! A watch I can use for almost a whole day before I need to take it off to recharge it. Call me unimpressed, but something that effectively becomes an expensive bracelet if I can’t charge it before the day’s end is not what I look for in a watch.
Sure 18h of battery life is good, just not for a watch. By comparison, my dumb watch that does not allow me to make phone calls can easily go for 18 months before I need to change the battery.
As much as I would love a cool smart watch, I think I’ll wait a couple of years until I can actually get something usable.

I am in no way the target audience for a smart watch, but 18 hours? Is that not a bit short?

If you forget to charge it one night, it’s dead the next morning. Or, if you go on some exciting 48-hour bender (for which I am also not in the market) you’ve got to charge your watch twice in that time to prevent your smart watch downgrading to a dumb bracelet?

Heres an interesting take on the smartwatch concept i stumbled upon: the smart watchstrap! 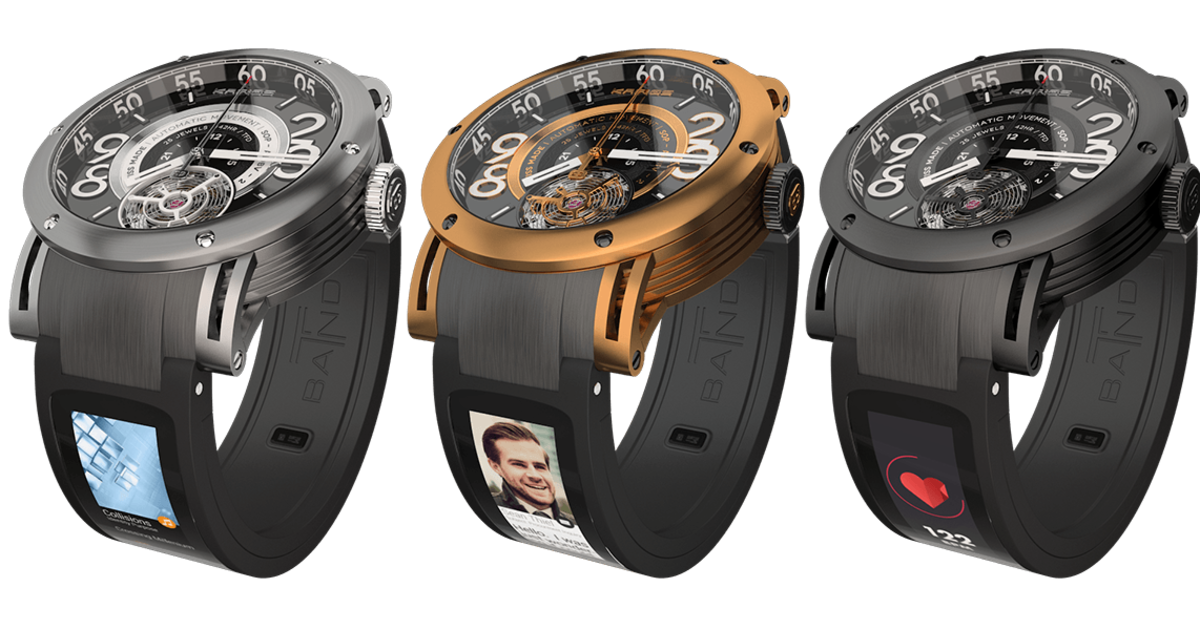 Keep your favourite watch and turn it into a smart watch with the T-band! | Check out 'Kairos T-band Smartwatch: Best of analog-digital' on Indiegogo.

Even if the ‘smart’ part runs out of charge, you still get the functionality of a watch

I am in no way the target audience for a smart watch, but 18 hours? Is that not a bit short?

I will bet that there were many, many very terse meetings trying to get the engineers to crank 24 hours out of a battery the size the designers had set, and many, many angry exchanges.

Having just read an in-depth article on Apple’s lead industrial designer, Jonathan Ive, have don’t doubt that it was pretty excruciating for him to release a product that so clearly missed that obvious goal.

Although, thinking on it, 18 hours may have been better than if those engineers had managed to get it up to 23 hours — now that would have looked even worse.

Looks, very neat, but I’d be skeptical if the first versions shipped to the backers looked anywhere near as smooth as that video. I’d want to see a video of their working prototype first, not all this CGI stuff.

What’s more, that’s not 18 hours of intensive use. It’s

“90 time checks, 90 notifications, 45 minutes of app use, and a 30-minute workout with music playback from Apple Watch via Bluetooth, over the course of 18 hours.” 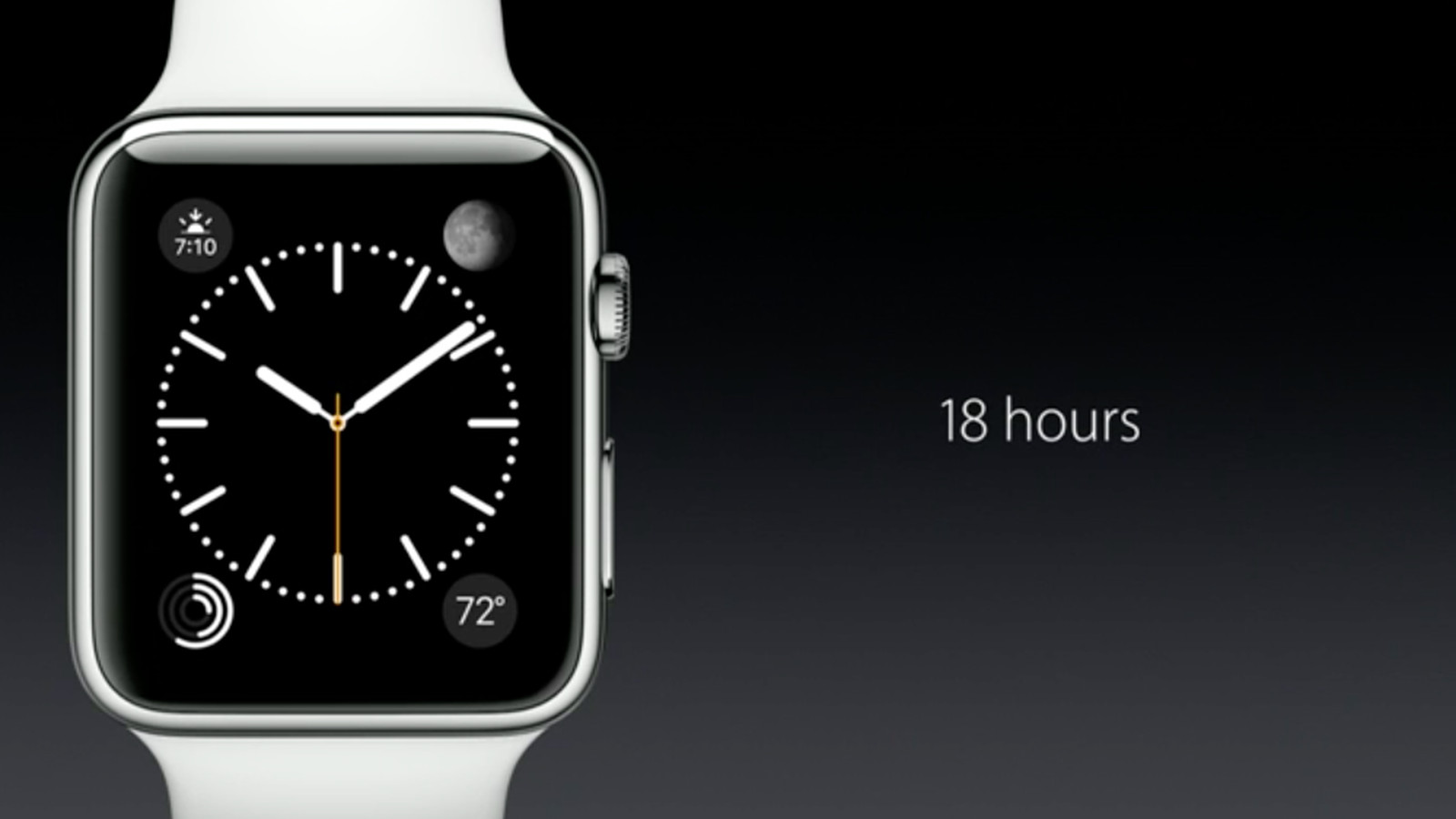 Apple Watch will get 18 hours of battery life

Battery life is probably the single biggest question surrounding the Apple Watch (after its full range of prices, of course). Now, we're finally getting an answer — Apple has just announced its...

Finally, Apple gave some details about more minimal usage that’ll extend the Watch’s life — if you’re just checking the time (5 times an hour for 4 seconds each, under Apple’s tests), the Apple Watch should last about 48 hours. And, as we heard in reports over the last month or so, there’s a low power reserve mode. If the battery of your Watch gets too low, it’ll automatically switch to power reserve mode. Apple seems to imply that the watch will last an additional 72 hours at that point: “If your battery gets too low, Apple Watch automatically switches into Power Reserve mode so you can continue to see the time for up to 72 hours.” That’s pretty impressive, if true, but we’ll have to do some thorough testing to see exactly how this all plays out.

Watches express who you are.

They lost me there! Or, they would have, if there was a “me” with a self to lose.

The $10k version is hilarious. For that money you can literally buy a Rolex and two plane tickets to Geneva to pick it up in person.

I think 18 hours is carefully selected.

After all, this number will be subjective to everyone based on use. Its a made up number.
So why not claim 24 hours and spec 30 min of app use or 60 notifications?

Because if we don’t claim 24 hours, people wont get as upset that it doesn’t meet that statement.
If we claim less than 24 hours people will know they are supposed to charge it every night.

This way, average apple consumer Joe will know that it will mostly last from when he takes it off the charger in the morning, to when he goes to sleep again at night
6am to 12-midnight.

I’m willing to bet that many wealthy people in China will be happy to have this, instead.