Which Republican candidate will renounce these as another example of the decline of America? Huckabee? Santorum?

I’ve been doing yoga for years and I really fuckin’ hate this shit. I am just so tired of how it’s all turned into a show about how hip and cool you are with your yoga pants that make your ass look great and your fancy mat and oooh! Army guys - isn’t that hipster? Can we just not sell all this cute crap and just do yoga? 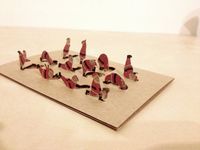 Can we just not sell all this cute crap and just do yoga?

This is what happens when you like cool things. Better luck next time.

Like most things which require actual practice, I suspect that the hype will dissipate sooner than later.

I thought that, too, when it first went big, but it just won’t stop. Go away hipsters. I want my yoga back!

there’s a Broga class near me. they do yoga to metal and then have beers afterwards. at first it made me cringe, but hey, if it gets more guys into yoga, i guess i can be cool with it.

Come on, say it with me: “I was into it before it was cool.”

Yes. yes, I was. I have a fuckin’ mimeographed practiced sheet from this guy.

John Schumacher is the founder and director of Unity Woods Yoga Center, Washington’s premier yoga studio. He has practiced yoga …

Obviously you have overlooked the traditional end for all plastic army-man figurines.
Obliteration by magnifying glass, or firecrackers.