There’s an unfortunate tendency among many progressives to assign the worst motives to people in red states, rather than trying to understand where they’re actually coming from,

I live in Texas, home to a whole lot of book banning attempts. Including total bans of having the books on campus. I’ve been following the news, I’ve listened to the live recordings of school board meetings. The book bans are about these people being bigots who don’t want their kids exposed to any, and I mean any, discussions of race, gender identity, sexual orientation, child abuse, sex ed, or white ppl doing bad stuff.
The people pushing the book bans and the officials enacting them are hard core white christian conservatives pushing an agenda of hate, misogyny, and bigotry. They want their white, christian, cis-hetero paradise and they don’t care who they trample to get it. For most of them, the trampling is a lovely bonus.

The book bans are about these people being bigots who don’t want their kids exposed to any, and I mean any , discussions of race, gender identity, sexual orientation, child abuse, sex ed, or white ppl doing bad stuff. 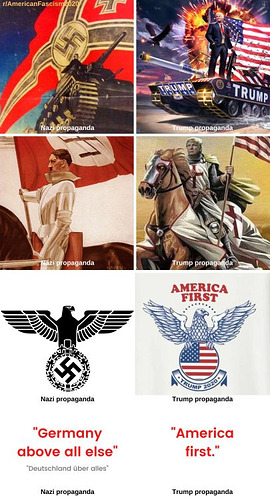 wtf, is that a soviet tank on the right?

It’s supposed to be a German tank… I have no idea if it’s accurate, but there is plenty of warmongering nazi propaganda to choose from (both from the era and more modern versions). The point is to draw the connections between the current Trump movement and fascists in the past.

I mean on the right where Trump is riding a tank with round turret. Because that sure doesn’t look like US nor German weapon. One on the left is Panzer IV I think.

Oh! Sorry, missed where you said “on the right”… yeah, probably… would make sense…

I really wish that sometimes a flagged post would stick around. All of the conversation that was here earlier had some good insight, and now it’s lost to the ether.

Fortunately the gist of it was “Stop supporting another Nazi book ban!” but i know what you mean.

And “stop denying what’s right in front of our faces, cause that’s gaslighting” too.

But hey… I promise you that there’ll be yet another chance for us to say the exact same shit when this happens again real soon! If we say it enough (because we have to since some people don’t seem to get it), some people will remember it well enough to recite it from memory and pass it on in other contexts of their lives!

Sure to happen again soon.
I’m sure all these fucking Nazi enablers come from the Well, actually…

And “stop denying what’s right in front of our faces, cause that’s gaslighting” too.

What’s frustrating the most is that I watched these people, directly, intentionally say that yes , they are white supremecists, they want to control what their kids watch and learn and want to eliminate non-white culture. That they want to eliminate the gays, the jews, the non-whites from positions of power and life itself in some cases, and that they believe that doing so is in line with what their God wants. They will gladly , forthrightly tell you these things. They’re proud of it. They know exactly what they’re doing and why they’re doing it, and they know that they won’t be stopped.

And yet, when we’re like, “Hey, these people are meaning to commit wholescale genocide” we are told that “goodness you might hurt their feelings!” It’s madness. They’re telling us exactly what they are doing and we’re still squabbling over whether or not we’re going to upset their sensibilities if we even dare to counter such obvious things as book banning, jew baiting, gay bashing, etc.

Not all of us.

Some of us shut that bullshit down every time we encounter it, no matter how tedious it may get.

As my Gram used to say, every ‘shut eye’ ain’t sleep.

Exactly…every time some African nation implements a “kill or imprison the gays” bill, it always comes out that it was some right wing US Evangelical group that wrote and promoted the bill. They are fascists and it is about time they are called out for it.

That’s fair, I meant the us in more of a “far too many people who claim they;re on the left” way.

Anyone playing ‘the Devil’s Advocate’ for free or asking us to give open fucking fascists “the benefit of the doubt” isn’t being honest or realistic with themselves, let alone anyone else.

At best they are useful tools for the oppressors, and those of us who mean to survive this bullshit don’t have time for such passive enablers.

Again, Niemöller was a fucking selfish coward, and this time people are not waiting until they decide to come for us personally to ‘speak up.’ 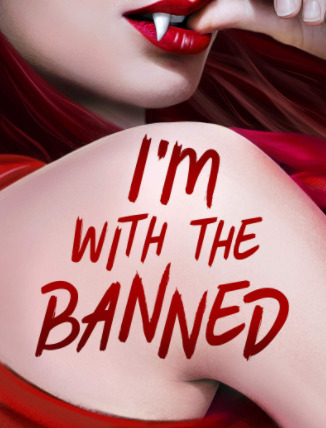 Its an M1A1. The turret has the characteristic flat surfaces. It only appears a bit rounded at the front because of blurring around Trump.

Not that it really matters mind you