Lately, he has been feeling apocalyptic about society, and he has been using his platform to talk up the artist Nora Krug’s recent illustrated adaptation of Timothy Snyder’s anti-authoritarian monograph On Tyranny. “I would suggest that would be the book more relevant for right now than Maus,” he tells me. When I ask him whether he and his family have an escape plan, Spiegelman says they could go to France, where Mouly is from. He says he thinks he can justify it, especially because Snyder says there’s no shame in running away if all else fails.

I didn’t know about Krug’s book! 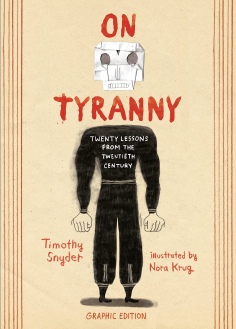 All Aboard the ARC: On Tyranny Graphic Edition: Twenty Lessons from the...

On Tyranny Graphic Edition: Twenty Lessons from the Twentieth Century by Timothy D. Snyder (Author) and Nora Krug (Illustrator) ***Note: I received a free digital review copy of this book from NetG…

I also like this photo of Art, which is perfect if you know what he does in Maus with himself and the whole “mouse” thing.

Short, structured, and sweet. Good article to read. Thanks for sharing!

Perhaps more remarkable is Spiegelman’s interpretation of the book ban, which pushes back against the idea that it was fueled by rising anti-Semitism

Perhaps not rising anti-Semitism*, but anti-Semitism that’s always been there. The demand that any state-approved literature must follow the path of uplifting Christian redemption is an inherently exclusive one that sees other religions as inferior and is an expression of bigotry. When that demand is specifically levied against the work of a Jewish creator, the kind of figure who’s regularly been accused of trying to introduce “alien values” into a nation’s culture, it’s anti-Semitic.

[* Though I’d dispute that in a time where bigots have been emboldened by sado-populist political movements.]

They just want a friendlier Holocaust to teach."

The Martin Luther King-ization of the Holocaust, then. Fsck that.

I think that line beautifully embodies what is so insidious about the ongoing book burning in this country.

It’s an exaggeration to call this a ban. A ban would be removing the book from the school library and/or prohibiting students from reading it during break periods or study halls. This was removing it as required reading under the curriculum. School districts make changes to curriculum reading materials all the time, often due to concerns about the appropriateness of the materials, but those are rarely called bans. The school board showed questionable judgment in removing it, but calling that a ban grossly overstates what happened.

Maybe read the articles and watch the many interviews with Spiegelman on this topic.

It’s a ban, as is all the books on Black and LGBQT+ history being taken out of schools. You dismiss this at the expense of all of us, but especially the groups being targeted like this.

It may not technically be a ban, but the intent is to obscure information from public eyes, which achieves the same practical effect. The effort to remove Maus from curriculum is not to shield the child’s eyes from nudity, but to remove a powerful message about the Holocaust from being used as an educational tool.

This is an intellectual travesty in the same category as using CRT ban to erase black authors from libraries.

“Ban” is a word people understand. If we use any other word, you are hiding the harmful nature of what these folks are doing, which is exactly the aim of these book burning activities.

It’s an exaggeration to call this a ban.

Fascism starts with banning knowledge and culminates in burning bodies in mass graves; FUCK THAT NOISE.

Fascism starts with banning knowledge and culminates in burning bodies in mass graves; FUCK THAT NOISE.

If the teacher decides to swap say Maus for The Diary of Anne Frank, that is a change in the curriculum.

The School Board saying Maus can’t be used at all in the curriculum, means it is a de facto ban.

I wish I said that instead of the embarrassing word salad I posted.

was removing it as required reading under the curriculum.

No. It was removing the anchor text from an entire subject module. As in, the entire module had to be completely re-done because Maus was the linchpin.

As for whether it was banned or not, we have already had that discussion. Art Spiegelman's graphic novel Maus now banned in Tennessee schools

That’s not what a ban is. And they are continuing the Holocaust component of the curriculum and are seeking other material to replace Maus. I think that’s a mistake whatever they might come up with would be inferior to Maus, but it isn’t a ban. A ban would mean a student couldn’t do a book report on it, for example, and that isn’t happening here.

I grew up in the Bible Belt in a small community probably similar to this one. I know people in that region can be quite coarse in adult peer-to-peer conversations but are also extremely uptight when it comes to what children are exposed to, especially when it comes to profanity, nudity or disrespect toward one’s parents, and multiply that ten times when such things are in officially sanctioned and mandated materials in schools. So yeah, you might call them provincial, old-fashioned and strait-laced, but this isn’t about refusing to teach kids about the Holocaust. There’s an unfortunate tendency among many progressives to assign the worst motives to people in red states, rather than trying to understand where they’re actually coming from, and I think that’s a big reason they harbor so much resentment toward metropolitan types and Democrats in general.

“Progressives” would object to this BANNING no matter where it occurs.

I know people in that region can be quite coarse in adult peer-to-peer conversations but are also extremely uptight when it comes to what children are exposed to, especially when it comes to profanity, nudity or disrespect toward one’s parents

And, as someone who grew up in the exact same environment, it’s almost always a cover for not exposing their kids to ideas that they know will open them up to a more progressive way of thinking.

In this case, it’s absolutely the case. Look around you. As someone who still lives in a red (turning purple) state, they are very much trying to turn back the clock to where white people and straight people and cisgendered people and white men could treat the rest of us like garbage, because they were not considered full citizens. That is literally what is happening. Fortunately for all of us, there are those of us down here unwilling to accept that role and who are pushing back against it. Giving them the benefit of the doubt will only lead to less rights for those of us who do not fit their definition of “real American”.

Start believing them, because they are really showing us who they are.

That’s not what a ban is.

There’s an unfortunate tendency among many progressives to assign the worst motives to people in red states, rather than trying to understand where they’re actually coming from

especially when it comes to profanity, nudity or disrespect toward one’s parents, and multiply that ten times when such things are in officially sanctioned and mandated materials in schools.

If nudity was the issue then the appropriate action would be to exclude one page with (rather abstract) nudity from the curriculum. The scene in question is absolutely not sexual in nature unless they consider suicide to be anything else. Is a book containing a greek statue, or any form of dots depicting nipples banned? No? Then nudity is just a hypocritical excuse to ban a specific book with a specific topic.

I get the feeling that you are not making your argument in good faith.

So yeah, you might call them provincial, old-fashioned and strait-laced, but this isn’t about refusing to teach kids about the Holocaust.

Yes it is. It is just doing so in an indirect and wildly dishonest fashion. The reason for the ban was specious at best. We know where they are coming from here. There is no mystery here. White Supremacy/Neo-Nazi beliefs are being espoused openly and obvious by “conservatives” these days.

I think that’s a big reason they harbor so much resentment toward metropolitan types and Democrats in general.

Because they are being called out on their bigotry in obvious and public ways. They don’t like the exposure.