Von Däniken’s racism seemed apparent pretty early on (or perhaps I’ll be generous and call it casual xenophobia). Non-European accomplishments? Must have been the aliens!

Robert Benchley wrote once of a patronizing caption to a “surprisingly lifelike” painting of a goose from ancient Egypt. Why the hell, he asked, couldn’t the Egyptians paint something they saw every day without moderns being surprised?

Yeah, whenever people start yapping about aliens having built this or that, my reaction is “you’re insulting the actual builders by suggesting that they couldn’t…”

Wow, what a weird article. It seems to focus on the most mumbo-jumbo aspects of “New Age” thinking without giving much credence to the fact that many people engage in things that once were associated with “New Agers” but have really made their way into mainstream society. Meditation, spirituality that’s not connected to a specific Abrahamic religion, yoga, healthy eating, appreciation of nature and the environment, etc.

Burn it all! Science will recreate its own!

yeesh, what a load of clap trap.

Found a typo: “Many of ots core ideas”

Right, it’s like “well, I can’t figure out how they did that, so they can’t possibly have done it.” Because we know that everyone who lived before us was a jabbering idiot! And we’re so smart. Of course, in the future, historians will be asking of us, not how, but why. 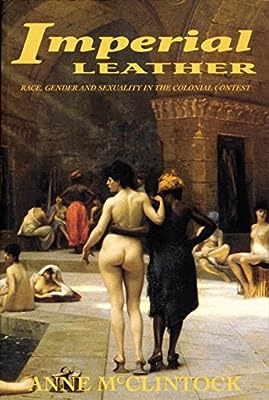 Imperial Leather: Race, Gender, and Sexuality in the Colonial Contest

Imperial Leather chronicles the dangerous liaisons between gender, race and class that shaped British imperialism and its bloody dismantling. Spanning the century between Victorian Britain and the cur ...

I also have a friend whose dissertation talks about the intersection of the new spirituality of the late 19th century, feminism (especially issues around birth control), and political radicalism…

What the ancient astronaut theory relies on, however, is the problematic pedestal of our Western worldview, interpreting ancient cultures from our own experience.

What’s interesting is that the article argues that Blatvatsky (and the guy who influenced Hitler) are seen as rejecting science, but (as my friend has argued - that Theosophy, Christian Science, etc were attempting to pull from science to make arguments about reality), their world view was informed by a scientific world view which claims a singular truth… it comes out of an incredibly warped view of science and how it operates, and what it can do for us (especially in the late 19th century). It was exactly the way that race theories were employed as unimpeachable science that backed up racism in society. The “problematic pedastal” I think is the narrowing of science to less of a tool (one of many, perhaps) to help navigate the world, to one that replaces everything else, by force if necessary. The truthclaims used by the west helped to justify all manner of violence, via the mantel of enlightenment science and philosophy.

Loving this Lemuria article. Lost continents are one of my favorite rabbit holes to go down.

That was an…interesting article. It just goes to show, how quickly any school of thought can plunge into idiocy and nastiness once it has detached itself from any need for supporting evidence.

Reminds me of Umberto Eco’s essay “Ur-Fascism” on the characteristic traits of fascism:

This new culture had to be syncretistic. Syncretism is not only, as the dictionary says, “the combination of different forms of belief or practice”; such a combination must tolerate contradictions. Each of the original messages contains a silver of wisdom, and whenever they seem to say different or incompatible things it is only because all are alluding, allegorically, to the same primeval truth.
As a consequence, there can be no advancement of learning. Truth has been already spelled out once and for all, and we can only keep interpreting its obscure message.
One has only to look at the syllabus of every fascist movement to find the major traditionalist thinkers. The Nazi gnosis was nourished by traditionalist, syncretistic, occult elements. The most influential theoretical source of the theories of the new Italian right, Julius Evola, merged the Holy Grail with The Protocols of the Elders of Zion, alchemy with the Holy Roman and Germanic Empire. The very fact that the Italian right, in order to show its open-mindedness, recently broadened its syllabus to include works by De Maistre, Guenon, and Gramsci, is a blatant proof of syncretism.
If you browse in the shelves that, in American bookstores, are labeled as New Age, you can find there even Saint Augustine who, as far as I know, was not a fascist. But combining Saint Augustine and Stonehenge – that is a symptom of Ur-Fascism.

This is a really odd essay, what with its melange of inaccurate history and a kind of projective xenophobia (“Don’t dabble in foreign cultures, kids, it only leads to Nazism!”).

Ironically, the fear of cultural borrowing (or, god forbid, outright cultural miscegenation) expressed in this essay has something in common with the Nazi attitudes which it claims, rather unconvincingly, result from cultural borrowing and Theosophy.

The Nazis, of course, were quite keen on avoiding contamination by foreign cultures (e.g., Nazi attempts to suppress jazz music in Germany, or the SS’s brief flirtation with trying to cleanse the German language itself of non-German words). The idea that it’s best not to have anything to do with other cultures is something they would have agreed with (albeit for rather different reasons).

“Her [Blavatsky’s] assertion of Aryan supremacy, based not on provable science but upon her own mystic channelings, set a dangerous precedent for others to exploit.”

Please. The doctrine of “Aryan supremacy” – complete with the identification of Germans as the “purest” of Aryans – originated with the French diplomat Joseph Gobineau back in the 1850s (with help from the French scholar Émile-Louis Burnouf). You’ve basically got the causality backwards.
http://www.fsmitha.com/h3/h45-gobineau.htm

Nazism did not arise from Theosophy; it arose from the combination of extreme romantic nationalism and mid-/late-19th Century “scientific racism”. There’s no evidence that Hitler ever took occultism seriously, let alone Theosophy.

Not by any knowledgeable historians he isn’t. The swastika is a widespread symbol, found in ancient Greek, Roman, Norse, Celtic, Slavic, Armenian, and other cultures (including North American Indians), as well as in India and China. The popularity of the swastika in late 19th and early 20th Century Europe largely originated with Heinrich Schliemann’s excavations of Troy in the 1870s: Schliemann found swastikas there, and connected them with ancient Greek and German occurrences, as well as with its use in India. Schliemann argued that the swastika must have been an ancient Indo-European symbol; thus it was easy for the Aryanists to annoint it a primal “Aryan” symbol. No “appropriation from Hindu tradition” was necessary, other than the name (and of course Germans usually referred to it as “Hakenkreuz”, not “swastika”).

The swastika (as a character 卐 or 卍) is an ancient religious icon used in the Indian subcontinent, East Asia and Southeast Asia, where it has been and remains a sacred symbol of spiritual principles in Hinduism, Buddhism and Jainism. The name swastika comes from Sanskrit (Devanagari: स्वस्तिक), and denotes "conducive to well being or auspicious". In Hinduism, the clockwise symbol is called swastika symbolizing surya (sun), prosperity, and good luck, while the counterclockwise symbol is called sau...

Western use of the swastika in the early 20th century

The swastika (from Sanskrit svástika) is a symbol that generally takes the form of an equilateral cross, with its four arms bent at 90 degrees in either right-facing (卐) form or its mirrored left-facing (卍) form. The Swastika (also known outside the Indian subcontinent as the Hakenkreuz, gammadion cross, cross cramponnée, croix gammée, fylfot, or tetraskelion) (as a character 卐 or 卍) is an ancient religious symbol originating from the Indian subcontinent, that generally takes the form of an equil...

And treating other groups’ cultures as off-limits and untouchable doesn’t other them?

I think the essay is ralking about fetishization of rituals and ignorance of the people. New Age spirituality is yet another way white people patronize their ‘lessers’.

Why the hell, he asked, couldn’t the Egyptians paint something they saw every day without moderns being surprised?

In the specific case of the Egyptians, it might be legitimately surprising; since so much of their art history involves the development of technically accomplished but deliberately stylized-for-various-symbolic-purposes stuff. On those occasions where somebody decided that it was realism time, they had no particular trouble; but that was the exception.

If an abstract expressionist just painted a goose; I might well be inclined to describe it as ‘surprisingly lifelike’, not because I assumed that the artist had zero technical ability; but because doing a relatively realism-focused painting is somewhat contrary to expectations for somebody whose style usually leads elsewhere.

This is a really odd essay, what with its melange of inaccurate history and a kind of projective xenophobia (“Don’t dabble in foreign cultures, kids, it only leads to Nazism!”).

I don’t believe that’s even remotely the argument though… rather that the appropriation of culture by people living within colonial powers was from a position of power, and often dismissive of the people from other cultures. It’s not dabbling in foreign cultures, learning about them, trying to understand them, etc, it’s about taking aspects and using that to shore up one’s own position in the world, by asserting that one knows better than the natives…

Nazism did not arise from Theosophy;

I think the author is not arguing that Theosophy gave rise to Nazism, rather that the two had ideas in common.

“To use the most attractive parts of a group’s culture and spiritual practice to pretend otherwise others them further”
And treating other groups’ cultures as off-limits and untouchable doesn’t other them?

I think both can be true. The point is that taking parts of a culture, reworking them in a way that ignores the agency of the people whose culture you’re taking from, is indeed from a similar well-spring of general western oriented racism that arose in the 19th century that DID in fact give rise of many of the theories espoused by the nazis.

I always thought New Age was the stop gap between Orientalism and Modern minority fetishism.

Reading the bit about escaping Atlantis and favored peoples and swarthy savages . . . I can’t help but noticing a resonance of that in Tolkien. Specifically, the division in Middle Earth between Elves, favored human races (Numenoreans), and the grubby, uncivilized rabble who live in the hills or in Morgoth-worshipping barbaric kingdoms far to the east.