One thing we can be sure about is that Priti Patel will do whatever she thinks will be the most cruel course of action.

He’ll be on the next plane, then.

The inevitable conflicted feelings about his avoiding prosecution for sexual assault and extradition on these charges.

But I feel confident that I can separate the repugnance of his alleged sexual assault, collaboration with Stone and Trump, treatment of Chelsea Manning and consideration of whether he should be extradited on these charges.

It’s a tough choice for Patel. On the one hand, she’s always up for an unjust national security prosecution like that which awaits him under the bogus U.S. “espionage” charge. On the other hand, she must appreciate the work Assange did with Putin in 2016 on behalf of her fascist counterparts in the GOP. In the end, she’ll go for the latter, as the betrayal of a Useful Idiot ally will be too tasty for a gratuitous sadist like her to pass up. 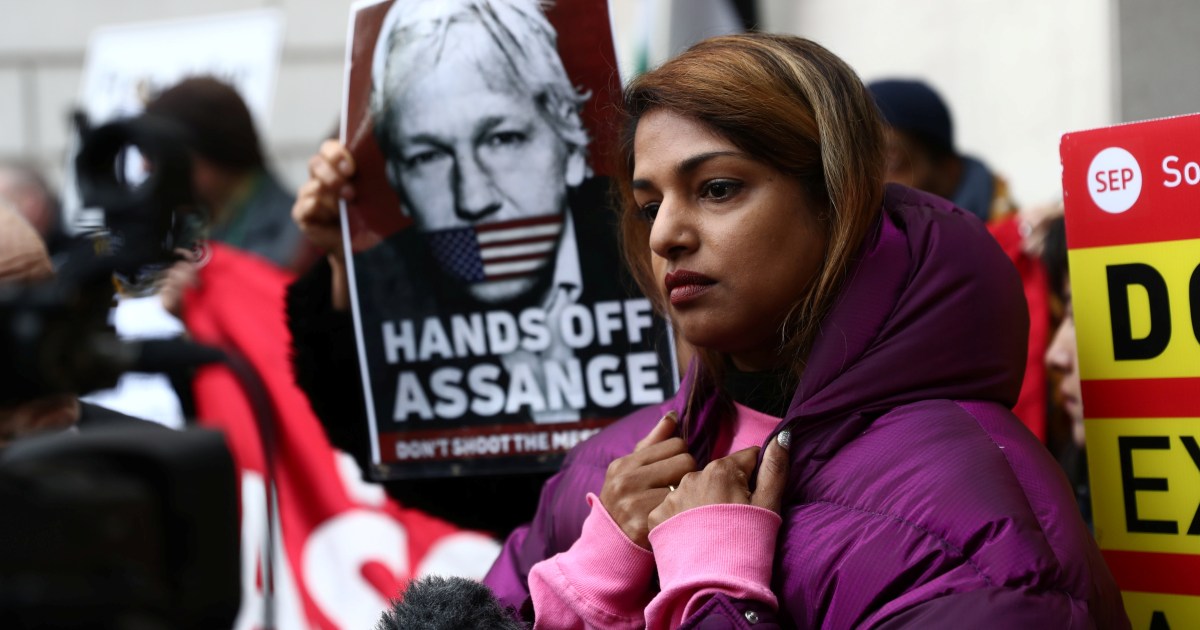 Julian Assange supporters outnumber his critics. Who are they?

With a week until a UK court announces the verdict on Assange’s extradition case, we review his supporters and critics.

The Argentinian president, who has been described as a leftist, was one of the signatories of the September letter, which described the allegations against Assange as “troubling”.

“We call on you to act in accordance with national and international law, human rights and the rule of law by bringing an end to the ongoing extradition proceedings and granting Mr. Assange his long overdue freedom – freedom from torture, arbitrary detention and deprivation of liberty, and political persecution,” the letter said.

The former Labour Party leader and current UK MP, a veteran socialist, has said possible extradition to the US should be opposed, and called for the rights of whistle-blowers and journalists to be “upheld for the good of all of us”.

The ex-Brazilian president has consistently demanded Assange be released. In September, he wrote a column for the UK’s Guardian newspaper saying Assange’s possible extradition to the US would be “an outrage”.

Linguist and political critic Noam Chomsky, one of the world’s leading intellectuals, claims extraditing Assange would be “catastrophic” for press freedom.

“Assange is on trial for his journalism, for his principles, not his personality,” he and writer Alice Walker said, in an op-ed for the UK-based paper The Independent.

Chomsky is one of the three co-chairs of the pro-Assange website AssangeDefense.org [File: Uli Deck/EPA]

The world-renowned artist has hailed the WikiLeaks founder, asserting that Assange represents “a core value of why we are free” – a comment that referred to press freedom.

“We need a lot of protesting, and it can take any form. I’m an artist, if I cannot use my art, it’s very limited, then I’d rather just be silent,” he said at a pro-Assange rally in September.

The former Ecuador president has long been a supporter of the Australian, granting him asylum in 2012 at the country’s embassy in the UK.

After his successor and current President Lenin Moreno revoked Assange’s asylum, leading to his arrest by UK authorities, Correa strongly condemned the decision.

“Scoundrel and betrayal can be summarised in two words: Lenin Moreno,” he said.

“I made a mistake some years ago, not supporting Julian Assange – thinking that he was a bad guy,” Palin said on social media. “And I’ve learned a lot since then … He deserves a pardon.”

Palin had previously been an ardent critic of Assange, who released private emails and photos of the former Alaska governor in 2008 during her election campaign.

The television and film actor took to social media in September and appealed to Trump to pardon Assange.

Anderson, who shot to stardom after starring in the popular 1990s’ TV series Baywatch, has long supported the WikiLeaks founder, visiting him in London before and after his arrest from the Ecuadorian embassy.

The Pink Floyd co-founder has been spotted in several protests over the years in support of Assange’s release and against his extradition.

At a pro-Assange rally in September 2019, Waters sang the bands track “Wish You Were Here” in honour of the 49-year-old Australian. The song was originally written to pay tribute to another co-founder of Pink Floyd, the late Syd Barrett – who died in 2006.

Democrat congresswoman and 2020 presidential candidate Gabbard has been one of the most vocal voices demanding Trump pardon Assange. She said the WikiLeaks founder acted in the “public interest … to expose lies and egregious abuses of power in our government”.

“Since you’re giving pardons to people, please consider pardoning those who, at great personal sacrifice, exposed the deception and criminality of those in the deep state,” Gabbard tweeted last month, in support of Assange and NSA whistle-blower Edward Snowden.

The US whistle-blower Snowden has called on Trump to pardon Assange, tweeting on December 3: “Mr. President, if you grant only one act of clemency during your time in office, please: free Julian Assange. You alone can save his life. @realDonaldTrump.”

British rapper MIA has described Assange as “an icon on a scale we’ve never had”, and has previously visited him at Belmarsh, a high-security prison where he is currently being held.

In an interview with Al Jazeera last year, the Sri Lankan born musician said, “Persecuting him [Assange] won’t solve any of the problems we have as humanity going forwards.”

A renowned American whistle-blower, Ellsberg has said Assange’s release of the Afghanistan and Iraq war logs were “comparable importance” to the Pentagon Papers – a study on the American war Vietnam, which he leaked in 1971.

The former military analyst made the comments at Assange’s trial in September.

“It was clear to me that these revelations, like the Pentagon Papers, have the capability of informing the public that they had seriously been misled about the nature of war, progress in war, the likelihood of it ending at all,” he told the court.

Please UK please keep Assange in your ‘tender’ care. Our political idiots have all the shiny objects they can manage stuck sideways in their mouths.

Palin had previously been an ardent critic of Assange, who released private emails and photos of the former Alaska governor in 2008 during her election campaign.

That reversal is wild. Wonder what changed her mind?

Love your formatting!! Chomsky’s was the most compelling to me, and he’s not wrong.

Putin, Roger Stone, Nigel Farage and Trump should be on that list.

ETA: I understand it’s bad to attack journalism, I don’t think what he does is good journalism. Given that he ignores and collaborates with bad actors but only releases info on people and countries he has a personal dislike, I think it might be better classified as opposition research. When I say “bad actors”, I mean murderous and fascist people.

He’s okay with people serving time for him, but refuses to do so himself. Okay.

I feel confident that I can separate the repugnance of his alleged sexual assault, collaboration with Stone and Trump, treatment of Chelsea Manning and consideration of whether he should be extradited on these charges.

Still, I can’t see myself mustering the energy to attend a protest in support of the guy. I’d feel compelled to fill the picket sign with qualifiers explaining why I still believe Assange is a huge piece of shit.

I don’t like people who rape and use others, but apparently, that’s okay if they’re sticking it to the US and HRC specifically.

What are they going to charge him with?

The alleged sexual assault charges and any other political shenanigans (not sure exactly what those are or what charges they would bring) I am 100% not ok with and he should be prosecuted.

And in general, I think he is a shit person.

But if the charges are for the Snowden leak, I am 100% not ok with him facing charges for that.

Indeed he should. In Sweden. This is about an extradition to the US.

And in general, I think he is a shit person.

If we had effective leadership in the US, there would have been a law passed protecting whistleblowers (or the ones that exist given teeth), and he should have been given a full pardon by Obama.

ETA: Oh, and Assange can burn in hell for all I care. Conflating him with journalism is bullshit. He’s just another cheap grifter who participated in a good thing once and then ruined the utility of the good thing he participated in for his own gain. Fucking precedent my ass. People need to remember that this type of reaction to criminality being exposed will always result in persecution unless there are strict laws and enforcement preventing it. Assange is no martyr.

Priti Patel will do whatever she thinks will be the most cruel course of action.

She cannot think. With her, it is pure instinct.

I think you mean the Manning documents? I thought that they still wanted Assange for giving Chelsea Manning hacking tools to steal a bunch of diplomatic cables. Was Assange even directly involved in the Snowden leaks?