“At 10 past 9, A feeling thats hard to define” – Or is Wintergreen no longer a valid pop culture reference?

Imagine a Beowulf cluster of those…

FWIW, there is a fan patch to E.T. that significantly improves the gameplay. Good luck applying the patch to an actual E.T. cart however.

I read that patch page a few years ago, and was always impressed. Maybe it ET’s dev time had been given just one more week…

Not just ET by the way. Depending on who you ask, 14-25 semi trucks worth of various Atari gear was dumped into that hole. Pictures taken over the weekend show promotional materials and samples from basically every game Atari was selling at the time. Ars suggested there was also consoles and maybe even some in-development hardware discovered.

I played that game back in the day. I don’t think I ever beat it or figured out what the point of the game was. But that was the early 80s. Back then you didn’t expect to beat a game. You just played until you were dead.

That game was one of those your grandma bought at SaveOn drugstore and you tried it and said thank you, but then tossed it in a drawer because when you tried to return it you realized it was on clearance. (Love you, Grams)

Odds that he became a psychotherapist as part of a prolonged battle to forgive and accept himself?

I should also note that it is really odd to look at gameplay videos of this game. Synapses that haven’t fired for probably 30 years are being dusted off and bringing back ancient memories. It is so weird.

Playing that patch excised a lot of my childhood demons. I felt cleansed when I got on that spaceship.

[quote=“xzzy, post:6, topic:29655”]Ars suggested there was also consoles and maybe even some in-development hardware discovered.[/quote]I’m really looking forward to further news of that more than anything, but at this rate it looks like they’re probably going to save the juiciest bits for the documentary.

I’m still kind of curious about the excavation process. Was there an entire layer of merch irrecoverably blended into concrete?

Also remember this is the guy (Zak Penn) who did the Loch Ness mockumentary with Herzog, so I’m half expecting the whole thing to be a hoax.

i never felt that this game was the worst. the indiana jones game was much worse to me.

What a monumental waste of time and money.

Are you talking about this unearthing, the fact they were put there in the first place, the game itself, or the 1980’s in general?

I wasn’t familiar with the urban legend, and I’m not much interested in it, but what really struck me was how dramatic of a testament this is to the ineffectuality of the older landfills like this one.

I find it remarkable (and concerning) how little the game manuals and boxes have broken down: 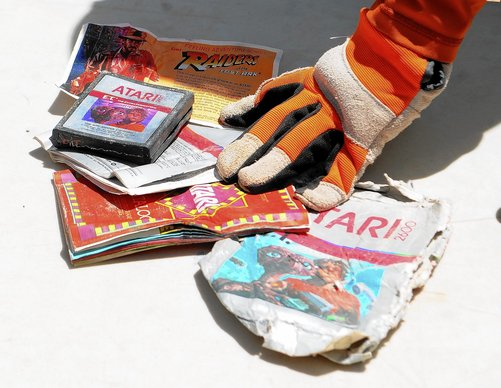 If you’re interested in the difference between old “dry tomb” landfills like this one and the newer types of landfills being used, check out these articles:
http://www.calwater.ca.gov/Admin_Record/C-036205.pdf

@rider, if this entire project was undergone in order to check and see if there were Atari cartridges inside, yes, I agree that it was a waste. However, given the timeline, I’m inclined to believe that this discovery may have been a byproduct of the landfill’s 30+ year maintenance and monitoring requirements. Since that was 1982, and this is 2014, maintenance and monitoring are likely still required.

To this day I cannot understand why people thought this was a hoax.

It was news back in the early 80s when it was going on. Atari was in massive financial dire straits and did this as a means to “write down” for the year so they didn’t have to pay taxes. They produced 12 million cartridges when thee were only 3 to 4 million consoles out there. I don’t blame the lead programmer for the game, he was the only one on it, and design to sell was 5 weeks. I blame the manaagement that paid $13,000,000 1983 USD’s for this movie license.

But yeah, this was never an “urban legend.” It was reported on by multiple papers as it was happening as well as TV news media filming the 14 some odd trucks coming in and dumping stuff.

it was a waste

Per the article: ''And over the weekend, with a couple of hundred onlookers watching, excavators led by a documentary film crew began to unearth stacks of 30-year-old Atari cartridges from a landfill outside Alamogordo."

It’s being sponsored by the fine folks over at XBox, so anytime you play a game of Halo I want to remind you that you’re dealing with trash pickers.