Are any of the inactive mechanics UAW members?

Might be they could do repairs without actually, you know, participating? Kind of like a collective bargaining agreement?

That doesn’t sound very fun to me… (just sayin!)

Tell you what, we’ll just take it as read that you agree to repair people as required unless you post here to specifically say no?

If that’s the direction we take then all of the Mechanics might as well just put themselves on auto-pilot… I guess the GM’s could have 8 more NPC’s to deal with… But then what’s the point in participating in a RPG?

But they aren’t participating.

Ah well. I guess the GMs are sizing things and tweaking difficulties for the amount of active mechs we actually do have…

ETA - not trying to disenfranchise anyone here, just musing about working around the resource constraints we have.

ETA - not trying to disenfranchise anyone here, just musing about working around the resource constraints we have.

Don’t worry as soon as all of the repair requests are reported, the UAW will make sure everyone is repaired as much as is possible… I’m sure we’ll be able to get you up to 75% MHP.

As far as ‘resource constraints’ are concerned… Reverend Clank and I are about to make an attempt at dissecting Stretch’s head, and so long as The Craftsman wills it, we will unlock his Arcane knowledge.

FWIW, once any of the inactive mechanics wake up or come back, they’ll be under the same constraints as the UAW members. (They didn’t get the PM, but if they pop up we’ll let 'em know.) Exhaustion is exhaustion, whether or not one has one’s ecclesiastical fervor to prop oneself up, and overextending one’s work will exact a toll on one’s own HP.

But for now, we know we’re operating on a three-Mechanic economy (which is closer to what we originally intended anyway), and we won’t punish you guys for the absence (temporary or otherwise) of certain players.

And the Foreign Motor Manual is out there, somewhere…

As is this book, written specifically for illiterate dipsticks: 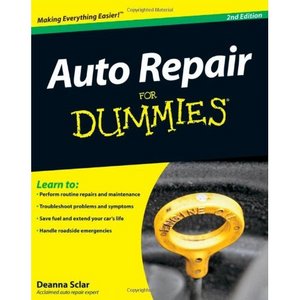 Hey, that’s me he’s talking about!

Mission one needs the best hauler, that’s me. All I ask is that I get healed for this mission. And a thick slice of deep dish pepperoni with mushrooms.

((ooc:
So far, we have requests for

OOC: So, is the number of repair points a mechanic can fix static, or is this based on some stat?

Their repair limit is 3x their max HP. Work done on themselves counts against the limit too.

OOC: OK I updated http://jsfiddle.net/gwwar/9Ly8W/embedded/result/ to show RP available for others assuming that the mechanic repairs themselves for full HP. So for example, Bill has 93 total RP and has 71 RP left to spend on the convoy.

Edit: I added two new fields that shows the sum of damage and repair points available of users visible on the graph. This should help guesstimate, as this repair system is rather complicated. If someone adds a Foreign/Domestic flag to the spreadsheet I could probably come up with something better. 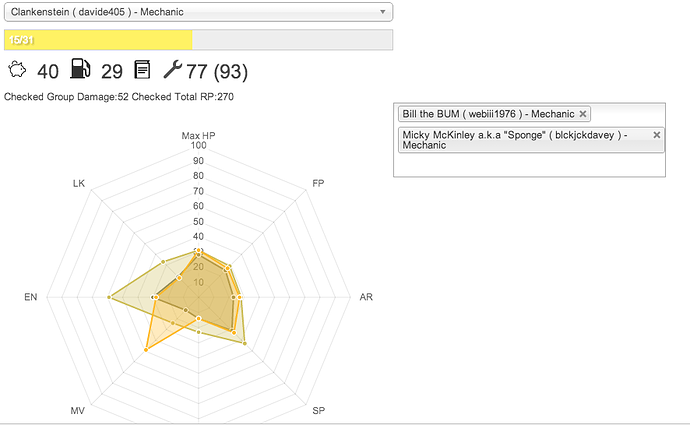