Spotted this in the Atlantic 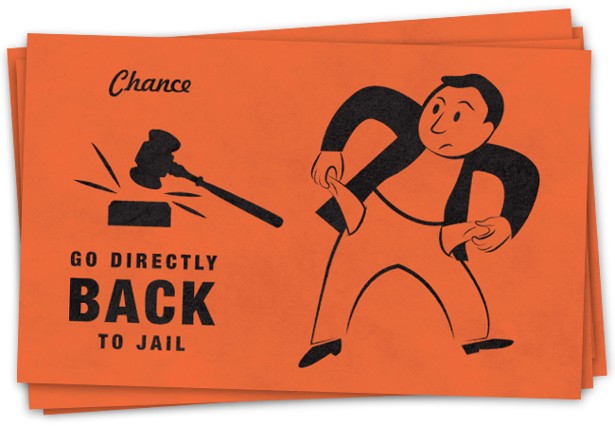 Get Out of Jail—for a Fee

Are post-conviction bail bonds a smart way to reduce the nation's prison population or just another way to exploit the poor?

After spending two days and nights in jail for drunk driving this past August, Howell was brought to the Byram city court, where she pleaded guilty and was told she had to pay a fine of $1,044. If she couldn’t come up with the money on the spot, she was headed back to jail. “I panicked,” said Howell, who lives and supports her son “paycheck to paycheck.”

But there was one other option. The judge explained to Howell that she could avoid jail by purchasing a new kind of bail bond, a post-conviction device that bail agents in Mississippi are busily promoting around the state. It would cost $155, and would buy her two extra months to come up with the money to pay her fine. Howell was then escorted to another room, where Patty Hodges from the Mississippi Bonding Company sat ready with the paperwork.

If Howell had been arrested two months earlier, her experience would have been different. Before this summer, those who found themselves facing a fine they couldn’t afford were allowed to pay the court in installments. But that system wasn’t working, says Dale Schwindaman, a Byram judge. “People would sign up for a payment plan, but then they wouldn’t come in and pay,” he said. Under the new system, if a person doesn’t return to court to pay her fines, it’s the bail agent’s job to track her down. This new system takes some of the burden off court clerks, who were hounding defendants to pay, as well as local law-enforcement officers, who were tasked with rounding up the people who failed to settle their debts. “It gives people some time to come up with the money, and they also give us a way to secure them actually paying the fine,” said Schwindaman. And it gives the bail bondsman a tidy profit.

In a federal lawsuit filed today, the SPLC accused JCS of violating federal racketeering laws by extorting money from impoverished Alabamians by threatening them with jail – debtors’ prison – when they fall behind on paying fines from traffic violations or other citations

Ever more neoliberal privatization. It tends to start in places like this, the penal system and the education system, that states cutting taxes and services, find attractive as an alternative solution.

Just more ways to suck money out of the pockets of the poor and into the pockets of the already-well-off. It turns my stomach. How can anyone be morally OK with this?? Even the conservative “take responsibility for yourself” narrative has to understand that you can’t get blood out of a stone.

This topic was automatically closed after 705 days. New replies are no longer allowed.