“Imitation is the sincerest form of flattery that mediocrity can pay to greatness” --Oscar Wilde (“well, unless there’s money and trademarks involved; then mickey mouse says it’s theft”)

On a closer read, you may be right. This is in line with the shredding image, a sort of performance art that the artist does delight in doing. He could have set them up by using Brandalised as a scapegoat.

Guess does seem to think they were licensing legally, and the way they shut the store down entirely suggests that they may not have been aware of the antic. Which raises the possibility of Brandalised not getting Banksy’s explicit permission and he reacted prematurely.

That was before he had any real money, so quelle surprise.

well, he’s not exactly claiming copyright infringement, so there’s that. he’s saying they used it without his permission, which may be splitting hairs, but i see his point.

Is it about money, or just that he doesn’t want corporations using his images to sell stuff?

But if that is the case, then what is the deal with Brandalised licensing the image if Bansky didn’t want them to?

Or is this all just Marketing, because I’d probably never have heard of this colab/window dressing otherwise. The cost of shutting down a store for a day and the possible increase in theft short term is probably cheaper than other means of marketing.

Brandalised is a subsidiary of Full Color Black, a company that has stolen art from Banksy in the past, and that Banksy has never given any sort of license to. (In fact Banksy has flat out refused to license his artwork to any companies.)

Brandalised/FCB flat-out lied that they have any sort of licensing agreement with Banksy, and even a cursory web search would tell you that. And definitely should have been obvious to Guess with even a cursory search.

Banksy ‘artwork’ is vandalism, he defaces someone else’s property. It’s also in a public, therefore does he really have any copyright to illegally created grafiti?

You have strange friends, sending you to ask this kind of questions.

ETA: I do not mean to offend you, I’m just confused as to the

Given how valuable it makes whatever he’s ‘vandalised’ he’s doing people a favour.

Legally, once a creative work enters the world the creator gets a copyright to it. If I wrote a manifesto on someone’s passed out drunk forehead they’d be free to wash their face, but I’d have exclusive rights to reproduce my manifesto.

If there was actual beef about a major retailer’s gazillion dollar co-branding campaign illegally using unlicensed art everywhere, it seems like there’d be legal action and Guess would at least pull the stuff off their website. Instead, there’s no movement besides a single instagram post from Banksy with a big photo of the store and the campaign logo front and center. Weird, that.

Banksy lost a court case in the EU regarding copyright due to his insistence on anonymity. The final ruling stated: 'As Banksy has chosen to be anonymous and cannot be identified, this would hinder him from being able to protect this piece of art under copyright laws without identifying himself,” the ruling adds. “While identifying himself would take away from the secretive persona which propels his fame and success.”

This ruling was overturned on appeal only last week. 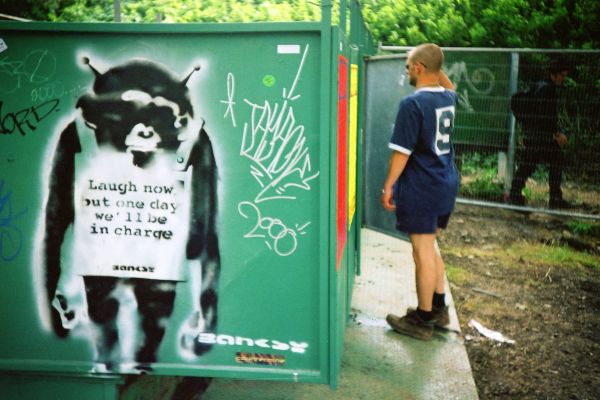 At issue was Banksy’s attempts to trademark a graffiti image of an ape. The E.U. Board of Appeals recently overturned a 2021 decision which found trademark to be invalid.

(No, I’m not kidding - that’s literally their argument - if he does something anonymously, they should be free to simply take his work and lay claim to it.)

does he really have any copyright to illegally created grafiti?

It’s not just an issue of copyright. The way this store is using reproductions of his work could lead a reasonable person to think that Banksy is associated with this product line, like how “OBEY Clothing” is a licensed product line created by Shepard Fairey.

Misleading customers to think that a living artist endorsed their product line is a dick move as far as GUESS is concerned regardless of whether it was legal (and it’s not at all clear that it was since Brandalized has no relationship to Bansky).