As long as we’re talking about IP law it’s also worth noting that Banksy’s legal claims have to do with Trademark infringement, not copyright.

Anyone can photograph a piece of public street art and hang the photo on their wall. But when it’s used in a context that implies some association with the artist that brings it into the domain of Trademark law, which is a whole different beast.

(and it’s not at all clear that it was since Brandalized has no relationship to Bansky).

Brandalised launched a Banksy-specific clothing line in March of 2021 in Eastern Europe and he didn’t have a problem with it then, and the Brandalised website is 75% Banksy works. It was founded by a marketing executive who had an existing licensing relationship with Banksy (via their company Full Colour Black, which distributes Banksy merch in the US to this day). Banksy absolutely has a relationship with Brandalised.

I know that Brandalised has been selling stuff with images of Banksy’s artwork on it but I haven’t found any indication whatsoever that he ever gave them permission to do so. In fact Pest Control (the one organization he does have a confirmed professional attachment to) tried to sue Full Colour Black for copyright infringement over unauthorized use of his work on their merchandise. 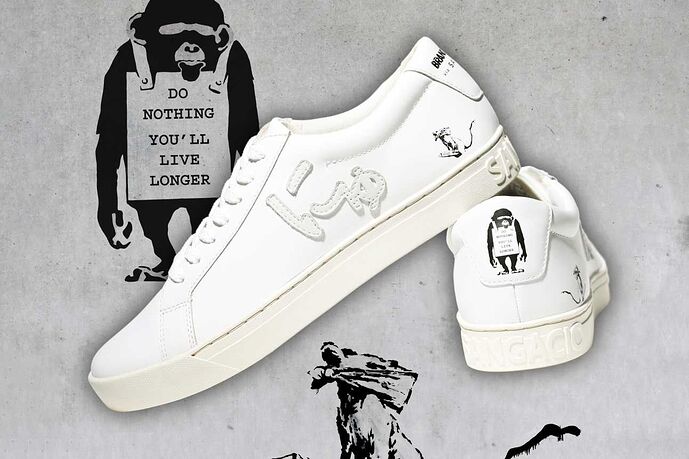 Ah, that’s the problem with an artist who zealously guards his anonymity: if Full Colour Black and Brandalized do have a deal with Banksy, it’s impossible to prove (or disprove) as long as Banksy refuses to reveal who he is, or take them to court for it. Well, almost impossible, as there may be ways for attorneys to represent him and somehow prove to the court that they do so at his behest, but I am no expert on UK and EU laws in that regard.

I shall continue to watch this unfold with a detached air of bemusement, as I neither shop at Guess nor do I have any interest in Banksy’s art other than as a casual viewer with no interest in owning, wearing or otherwise paying for it.