Ever get a memory of a book that you really liked when you were young, but now, as a grown-up, you don’t really remember it anymore? A friend had a memory of a picture-book he’d read in the 80s and asked if I knew it. He remembered it had a cave full of monsters in it. I sort of did. Together, we pieced together some details and I was more sure that I really loved this book. It had several stories, a witch, lots of blue ink, a disembodied hand, title lettering drawn to look like bones, and a cut-away view of being eaten by a wolf with his other organs labeled according to their funny bodily function.

The memories were from when I was a kindergartener, though, and all swirly in my head. But that oughta be enough to google it, right? Wrong. I started doing web and image searches using all the info, then combinations. Nope. Over the course of several hours I kept at it, adding search terms as we remembered new details. I was getting pretty frustrated. I thought the title had “spooky” in it and I was using the term “scary” at first, but then had to leave it out because the Scary Stories To Tell In The Dark books swamped my results. Finally, I did an image search that included the words “ghost story”

Boo-yaa! Typing the title and author into the bar got the wolf’s-stomach pic and this great spread with the disembodied hand

So now, my friend and I went over to Amazon because obviously this is awesome and we must now order copies. Unfortunately, we weren’t the only ones who felt that way. Since it is long out-of-print, these bad boys go for $200 now. FFFFFFUUUUUUUUUUUUUUUUUUUUUUU. Luckily, a kind soul has uploaded pics of almost the entire book to his blog so I could at least figure out what happened. There was tons of cool stuff that I’d totally forgotten and you really oughta click that link and check out the kind of TV shows that are popular with the undead. srsly.

So, how ‘bout it, Boingers? Has anything like this happened to you before? Maybe when visiting with younger siblings that inherited your books, or going through your folks’ attic? Or, do you have memories of any half-remembered kids books? Let’s post details, pool info, and get searching. Also, youth book illustration and nostalgia general.

I am a sucker for the Great Brain series. I relish the day my son (and daughters) are old enough to read them with me. God I loved the hell out of these books. Still do. I felt like they explained how the world really worked and if you were clever, you could sometimes outwit it. But only sometimes, and often not in the way you planned to…

I Stopped Reading Your Blog Years Ago

Emrah Diril recently asked me this via email: Steve Yegge mentioned in the comments of his last post that he gets quite a bit of hate directed his way. Fake51: you underestimate the ability of people to get mad. Some people start mad and just take...

The Mercer Mayer art, still wonderful after all these years.

Oh god, I agree! Everyone at camp thought I was the most autistic person alive when I went back to the empty bunk so I could finish reading Me and My Little Brain during our free-time period. Those books, man.

but OK, to actually make it on-topic, what was the one with the dragon called Alf? and was anyone else’s fifth-grade mind blown when they read The Magician’s Nephew and the thing with all those little pools being portals to separate magical worlds, only one of which was Narnia ?

For some reason my 3.5 year old is totally in love with Shel Silverstein books. Recently I got her a copy of:

Lafcadio: The Lion Who Shot Back

Lafcadio: The Lion Who Shot Back, first published in 1963, is a children's story written and illustrated by Shel Silverstein. It is narrated by Shel Silverstein in the voice of a character named Uncle Shelby. Lafcadio first appeared in the pages of Playboy magazine in the November 1963 edition of these magazine. It was part of a long history of Silverstein's contributions to the magazine and his close relationship with Hugh Hefner, the publication's founder. The story was afterwards turned into...

It is the absolute first time I am able to read her a children’s book that actually feels like a boo, she keeps on asking for more and more chapters.

There is something magical about Shel Silverstein’s writing, the whimsy, the philosophy the imperfect illustration. The combination of it all makes something incredibly approachable for tiny kids.

Hey, I think I remember Grandpa’s Ghost Stories. I want to say my school library had a copy.

Next time you get stuck on a book check out the “What Was That Book?” community. I’ve had a bit of success with them in the past trying to identify half-remembered childhood memories.

three-and-a-half? wow, that is pretty early for Silverstein, but such great books.

This topic reminded me of a book I loved as a very young reader about a machine that washes you, and a boy that loves mud. I remember the exaggerated number of car wash like steps illustrated in the book. I did some searching and I believe I found it while I was on vacation: 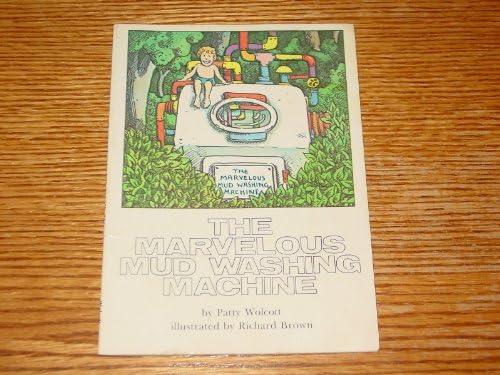 I located a copy on eBay for “cheap” which in this case is $30. Amazon new is $484, used is $38. Ordered it immediately and when I got back from vacation, it had arrived. Here are some quick iPhone pictures I snapped of the best part, the machine itself:

Now that I have it in hand (to share with my own kids, naturally), I am absolutely certain this is the same book. I was obsessed with it and read it over and over in school. I think I even tried to take it home at one point but the school wasn’t having any of that. As I said, it was a loooong time ago and I was probably just starting to read.

dude, I’ve never seen this particular book but I’m close to certain this artist illustrated my spelling books and maybe some other learning materials when I was a kid in Ann Arbor, MI. Google is not helping me, but I’d swear to it. An excellent illustrator–Richard Brown is his name–distinctive for his eyes and the lines in his halftones. This book has all that wonderful machinery, super cool!

I loved them in the second grade. my friends and I read all the ones in our library.

have you seen Mystery Team? it’s a modern satire of EB/Bloodhound Gang tropes:

it has its moments, and i think it still streams on netflix