Thank you Lawrence, for without you, I would have ended up another way, and I am mostly OK with how I turned out. Keep up the rabble-rousing, goodness knows they need it in the heavens as much as here on Earth.

When the pandemic first hit, I was reading his long poem-memoir, Little Boy, published when he was 100. It was incredible how good he still was at 100. So I went back and re-read a lot of his older stuff, like San Francisco Poems, Time Of Useful Consciousness, Americus, and yet again, A Coney Island of the Mind.

He hated cars, TV, Internet. But what he loved is the reason to read him.

Overall he seemed halfway between the poetry of the workingman, Philip Levine, and the erudition and anarchic radicalism of the Beats, steeped in Modernists like Joyce, Pound, Stein.

My high school english teacher recommended him to me. I don’t have a sophisticated perspective on poetry, and most of it leaves me somewhere between cold and disgusted. I like Ferlinghetti, though. When Mrs. Hungryjoe and I were teenagers, we made a trip to San Fran and made a visit to the bookstore.

Pound called one of the poet’s faculties “phanopoeia”: the ability of the poet to project images onto the reader’s eye. I see this as a good example of phanopoeia. I may “see” her hanging her laundry up more vividly because I’ve spent a lot of time in the North Beach section of San Francisco, but I don’t think lacking this personal experience detracts.

I thought about typing it out, but I’d probably screw up his line breaks. Thanks for finding this!

I was never lucky enough to meet Mr. Ferlinghetti but I hope I can eventually meet the driver of the car that bears this bumper sticker that I’ve seen a few times around where I work. I can tell we’re kindred spirits. 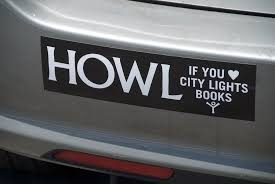 You’re right. LF said that many, many times. But we can’t help but call him a Beat (and Burroughs, who said he wasn’t a Beat, either) because of their alliances in time and place.

One way LF wasn’t a Beat: he never went for tons of drinking or drugs. Drugs?: hardly any for LF, from what I can see.

posted from the other Ferlingghetti thread:

I worked the North Beach cafe/restaurant/bar scene for 10 years [mid 80’s-90’s] City Lights saved my life, daily, weekly, and with out a shadow of a doubt the single reason I kept my cheese from sliding off my cracker. I hid in the basement, reading odds from the stacks, I drifted away from the insanity of the life I created to one that I wish I had. As the Sun set, I carried myself street-side to
the belly that needed pasta, needed drink, needed … What a sanctuary for my weary mind & soul.

Very saddened by this. Ferlinghetti was a family friend and a real mensch. But 101 is a pretty damn good run.

I think both him and Burroughs really were, from our current perspective. To me anyway, it was more about their collective output and perspectives and impact on culture (incl. moi) and the odd kind of group they formed. Less about any particular set of misadventures or dalliances. If anything I’m sure Lawrence was a grounding influence on many fronts. But oh man, he has the style, and he was, well, the core, at least for elevating the gang to such a level, and coalescing (and lending legitimacy to) the whole thing.

My dad was literally a part of the City Lights Beat scene in its heyday, and he didn’t readily identify as a Beat poet either. I can’t help but think that it was just a requisite of being a part of that subculture. (I also would guess it was also due in part to the stereotypes and misinformation perpetuated by mainstream media about the Beats.)

Perhaps it’s also the “beatific” attitude and the willingness to just step outside of society and, well, hit the road, not knowing where it will take you. Lawrence was a bit more “nailed down” so-to-speak, is my sense, and I wonder if maybe he didn’t see himself as a core part of that cadre per se, but rather, their enabler, patron and, perhaps to a degree, organizer.

But when I read his poetry, I do indeed sense that attitude, even if it was coming from the perspective of the group’s “elder statesman.”

Yep. Him and Kenneth Rexroth.