Beefalo are causing problems in the Grand Canyon

How do they taste with some butter and potatoes?

Pretty darn good. Like a slightly leaner beef steak. There’s a guy around here who raises Bison, started with a herd of what were technically “Beefalo”. Actual Bison (or I guess bison with less cow mixed in technically) is better, though its leaner still and thus harder to cook.

It may be natural, but is it what we want?

This is the anthropocene. It’s named after us. Thus, we’re Number One with a bullet.

I see no dichotomy in declaring our products natural, but also declaring that parts of that nature should be changed

Yup. We are a force of and in nature.

I see no dichotomy in declaring our products natural, but also declaring that parts of that nature should be changed

But again, if everything is “natural” then the term “nature” is completely meaningless.

“See you later, I’m going for a nature hike in the Financial District!”
“Made from all-natural ingredients including hormone-fed GMOs, trans-fats and synthetic additives.”
“Famed naturalist Ray Kurzweil just published a new book about the future of Artificial Intelligence.”

As I understand it, you don’t seem to believe there should be a term to describe “that which does or would exist in the absence of humanity.” Fine, but I think it’s a useful term nonetheless.

A corollary of this is Food Babe’s science and fear of dihydrogen oxide, so we should be careful trying to define nature too tightly… 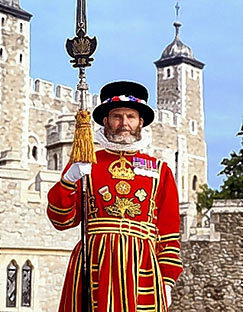 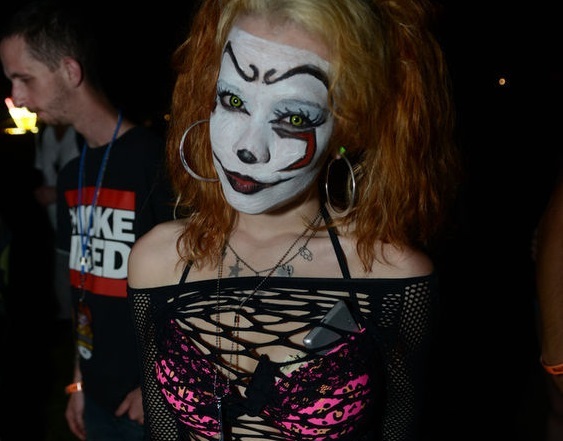 I like the way you cut it off at the first definition, rather than including the definitions that agree with the person you’re trying to refute.

Not so. I just grabbed that from [googling “nature definition,”][1] which immediately brings up this result: 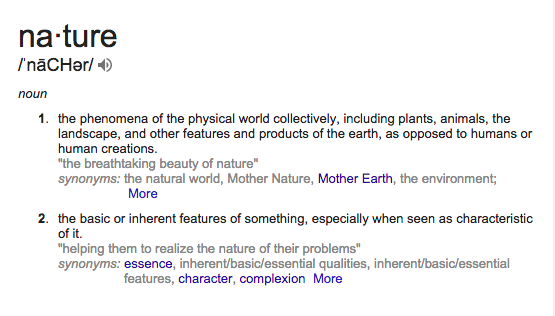 The only reason I didn’t include the second definition was because “the basic or inherent features of something” seemed like a different use of the word entirely, not a use of the word meaning “the physical world excluding (or including) humanity and its creations.”

Edit to add: Why the insistence on calling everything humans do “natural” anyway? If someone described how dog breeds were created through artificial selection it would seem awfully silly to insist “no, Chihuahuas and Mastiffs are the products of natural selection since humans bred them and humans are part of nature.”
[1]: https://www.google.com/search?q=nature+definition&oq=nature+definition&aqs=chrome..69i57j0l5.2671j0j7&sourceid=chrome&es_sm=91&ie=UTF-8

Where did you think buffalo wings came from?

Buffalo Buffalo All The Things.

People who say “Everything is natural, no matter what1111!!” are being silly. Really silly. Trolling in fact & should be ignored as ignorant.

Even those that want to be clever by having a larger dictionary fail on this one people. The closest -any- definition that is not made up on the spot by a troll is “having a physical existence, not of the spiritual or intellectual.” which is the words 9th definition by usage, at least in Canada. Even that doesn’t apply because nobody was arguing that the cowfallo in question didn’t actually exist in the physical “natural” world.

You want to chat ecosystems that’d be grand & on topic & I’m not about to tell anyone what to talk about in any case. I’m just pointing out that “Everything is natural, even my microwave oven” makes you into an instant idiot regardless of your other attributes.

Carry on, but please remember arguments over words are supposed to be fun or intriguing at least, not stupid assness from the outset.