Being a cop just keeps on getting safer

Ah, but if they hadn’t been just gunning down everyone who looks at them a bit funny, it would have stayed dangerous. Workplace safety is very important.

Does not match findings for interacting with the police…

On the other hand, I believe that hospital staff are at a much higher risk of being assaulted* than police, but nobody suggests that they should get body armour.

*although, to be fair, probably less likely to get killed.

South Eugene High School went on lockdown this morning during finals, due to a report of a man in camo carrying a sidearm and bag. Turns out it was a SWAT officer dropping his daughter off at the Y next door. 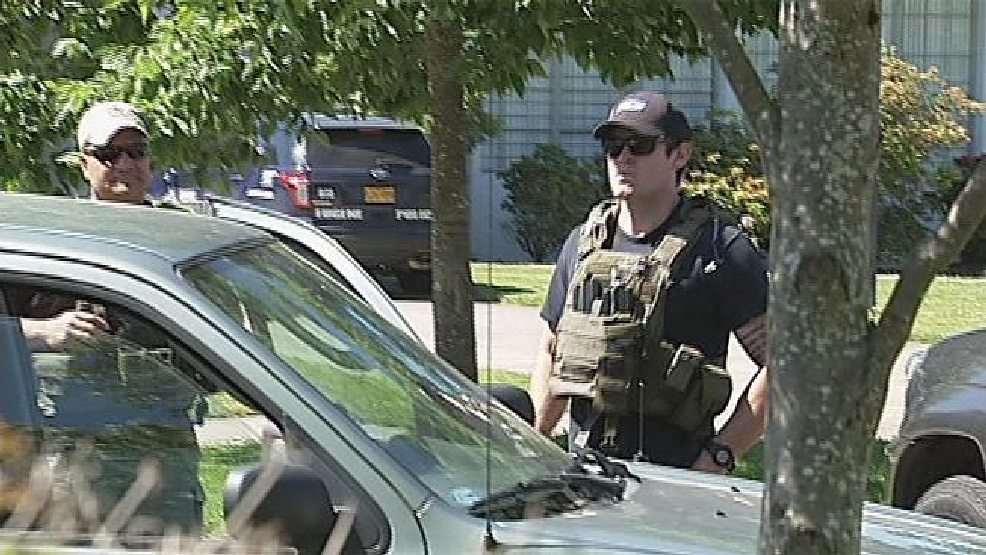 A report of a suspicious person sent South Eugene High School into lockdown on Wednesday, according to police at the scene.

Being a police officer doesn’t even rank in the top 10 most dangerous jobs in the US. Farmers have 3x the fatality rates as police officers who rank just below groundskeepers and above athletes.

Now if you limit fatalities to just murder, then they rate just below Taxi drivers (who are murdered more than 2x as often as police officers).

Yup, it’s dangerous to be a cop. About as dangerous (sources differ) as being pregnant, if you count one year on the job as comparable to one live birth.

The difference is that in one case, we spare no public cost to make it as safe as possible. In the other?

On the other hand, I believe that hospital staff are at a much higher risk of being assaulted* than police, but nobody suggests that they should get body armour.

The rates for hospital staff vary by job. ED and Mental Health staff are exposed to a lot of abuse. The more filtered your population, the lower the risk.

I was assaulted a few times as a mental hospital Care Assistant (patient washer, feeder, bed maker and all round gofer) when working my way through med school. I’ve been roundly verbally abused and threatened with violence several times as an ED doc, but never physically assaulted. Colleagues were though.

Now I’m an anaesthesiologist, people tend to be polite. But then I’m usually just about to give most of them a controlled poisoning. With the same sort of stuff that the US badly misuses for executions. So that may have something to do with it …

Recently I saw some quote by a cop to the effect that every 50 hours a police officer died in the US. Which maybe works if we include every police officer who dies under any circumstances - accidentally shot by a colleague, got in a car crash on the way to work, had a heart attack while having sex at home… And if we compare it to the rate at which people are killed by the police, it starts looking embarrassing for the cops.

Nope, it’s not that dangerous to be a cop. Just google “Most dangerous jobs”.

As far as comparing it with pregnancy, the FBI reports that “From 1980–2014, an average of 64 law enforcement officers have been feloniously killed per year.”
Pregnancies? The CDC says:

Mind you, the USA is particularly bad for this statistic. Other countries, especially those with socialized medicine (y’know, like Cuba) have much lower death rates for pregnancies.

It also pays to be white if you’re going to get pregnant in the US. The mortality rate for white, affluent women is probably around par with the sensible parts of the world that provide good universal care.

In terms of the rate at which various jobs are subject to non-fatal “violent” crime, bartenders have it the worst. Law enforcement is second, with correctional officers a few places under that (with, surprisingly, technical/industrial school teachers ahead of them along with custodial mental health care workers, etc.). Working in a prison is apparently only slightly more violent that working at a gas station. http://www.bjs.gov/content/pub/pdf/wv09.pdf

Now if you limit fatalities to just murder, then they rate just below Taxi drivers (who are murdered more than 2x as often as police officers).

The stats for 1998 indicated tax drivers were more than four times more likely to be on-the-job homicide victims. Subsequently there was a big drop in taxi driver homicides such that, in 2013, it looks like taxi drivers were murdered about three times as often as cops.

About 640, so child birth is still x5 or so as dangerous as being a cop

I’m surprised no one yet has pointed out they play this “DANGER” card not only to justify arming up like Delta Force, but to justify sky high salaries. I know this isn’t true everywhere, but a 10 year cop in the NY Metro area makes well over $100k including overtime, plus the usual generous bennies and early retirement to start a 2nd career in your 40’s. And that OT can be HUGE if you work the system, Some cops around here have pulled in $200k in OT alone. Of course they apparently never slept and no one questioned whether we really want sleep deprived cops on the street.

You’re right, I should have noted that. So I looked up the stats:
[One Wiki page][1] says:
“In 2008, federal police employed approx. 120,000 full-time law enforcement officers” and “In 2008, state and local law enforcement agencies employed…about 765,000 sworn personnel (defined as those with general arrest powers).” This gives a total of about 885,000 full-time officers - who are feloniously killed on the job at a rate of about 64 per year.

I was basing the comparison on all job-related deaths for police, not just “felonious deaths.”

They also have a fair number of accidental deaths (notably vehicular, not surprising the number of miles driven) and so forth.

Still, the fact that they make such a big deal of a rate that people consider “no big deal” for women says quite a bit about us as a society, no?

Compare with the 16 pregnancy-related deaths per 1,000 pregnancies per year per nine months.

That’s per 100,000 live births. Not quite the same. I did compare the original data, and if you consider the “sniff test” it makes sense. Having 4% of women die giving birth to the canonical 2.5 children would be enough that people in general would notice. In the original comparison I conceded the year/term discrepancy.

(notably vehicular, not surprising the number of miles driven)

Doubly not surprising since most of the ones I see are driving like jackasses.

Especially when they tailgate you on the freeway and by the time you notice you’re going 80mph because you’ve been subconsciously trying to make a more comfortable space behind you.

Then you realize that’s a cop tailgating you so as soon as you try to do anything to slow down or switch lanes, the lights go on, and out comes the ticket pad.

Seriously, that’s happened twice to me in 2 years. They creep up on my ass and it’s slow enough that by the time I realize they’ve been pushing me to speed it’s too late to do anything.