Being poor in America means you get more mosquito bites

Are we sure it isn’t just because millionaires can afford fancier bat houses? 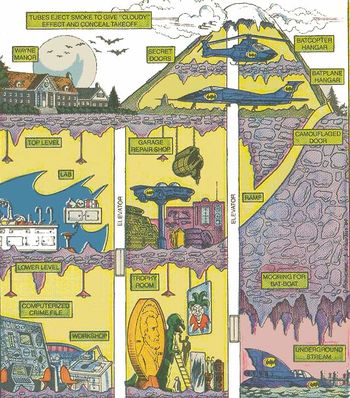 As someone who lives in Baltimore, I dunno about this. There’s just a lot of humidity and water around here anyway, and that breeds a pretty robust stock of every sort of pest; mosquitos, gnats, ticks, rats, bats, ants. . . .I’m not poor and I’ve gotten bit by all sorts of stuff around here. When I lived in the city directly, yes, you’d get mosquitoes from standing water in puddles and alleyways. Now that I live in the suburbs, you get mosquitoes from ditches, streams, clogged gutters. It’s a pretty equal opportunity pest IMHO.

I’m kind of torn on it. My guess, coming from the rural Midwest, is that the people on the higher end of the ladder probably spend less time outdoors, and probably spend more time in an air-conditioned building with screened windows that are in good repair when the windows are actually open. And when they’re middle- or upper-class suburbanites, other than things like fountains and bird baths, they’re probably in places with decent mosquito abatement programs.

I’m at the ass end of Illinois, and we have people who complain bitterly about the abatement programs…largely because they end up unfairly picking on the poor. Oh, you have some old tires and cans in your yard? Yeah, let me just write you a ticket. Now go take care of those tires. Nevermind that it also costs money to dispose of the tires. Having said that, abatement is important because malaria used to be a major issue here.

The research here says nothing about mosquito bites, or people at all (whether poor or rich). It measured neighborhoods, not people, and assessed containers of standing water and the mosquito larvae in them. The neighborhoods population densities are not recorded, so we don’t know what this means about whether given you are poor, you will get bitten more; or whether given you are a mosquito, you are more likely to bite a poor person. For example, areas with abandoned buildings are possible less likely to have people living there, being post-industrial, etc.

This seems driven by junk that fills with water in abandoned areas and lets mosquitoes breed. Notice the high number of ‘trash’ containers in low- SES neighborhoods, 80% of which have larvae. 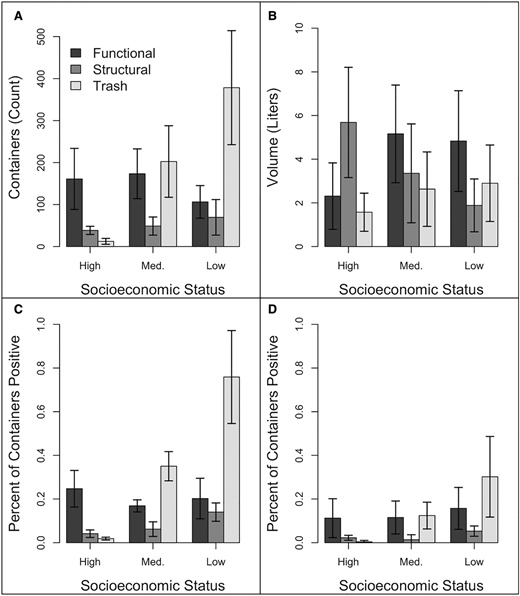 When they made a composite score based on the number, size, and number of larvae, you see that areas with more abandoned buildings (probably more likely to be industrial areas, and places where nobody lives) have about 2x the index, but this interacts with rainfall over the last few weeks. This is a little circular because the index incorporates things that have to be related to rainfall and depend on whether an area is abandoned (rain will fill garbage containers with water, leading you to count things you wouldn’t count in a drier area), so it is hard to tell what the interaction really means. 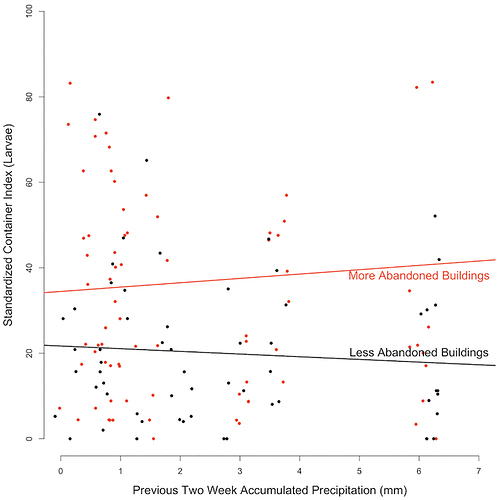 Being poor in America means you get more mosquito bites

DEET is my friend.

I’m sure their methods are perfectly sound, but why not simply measure infection rates by income level? The epidemiology of arboviral infections, as serious as they are, must be well-documented. That’s what we’re talking about, isn’t it? A bite is a nuisance; a disease is what matters?

Furthermore, is it not likely there is an urban/rural divide (to say nothing about regional variations in infection based on climate and environment)? Also, some of these diseases depend on non-mosquito intermediaries (reservoir hosts) uncommon in urban areas.

If the authors believe that that graph permits any meaningful conclusion beyond “Huh, Excel will just go ahead and draw a regression line through any dataset, no matter how negligible the correlation”, they’re delusional.

Given that scattering, I seriously doubt there’s any statistical difference in the mean SCI for the “more abandoned building” and “fewer abandoned buildings” (which don’t seem to be defined in the article – strangely binary categories for what must surely be a continuum of number of abandoned sites), let alone a statistically significant difference in the slopes of those two lines. I didn’t see anything in the article to suggest the authors tried to analyze that significance. Is there any real conclusion to draw from this?

Welp. J. Med. Entomol. has an impact factor of 1.7 and falling, so maybe that’s par for the course.

I knew it! I always knew mosquitoes were stooges of the plutocracy. I assume they were studying Anopheles Pinkertonnii?

I don’t have this issue, despite my (relative) poverty.
I’ve always assumed it’s just cuz I’m not that tasty…

Edited to include the note that I don’t disturb any of the spiders that share my home/yard with me, which probably helps. That said, even when we’re camping and everyone else is getting chomped, I’m still left alone.

Same here, but different. I will get 2x as many mosquito bites as anyone else I go hiking or camping with, or even if I’m just working outside and haven’t covered myself with repellent.
Mosquitoes: Omnomnomnomnom.

Huh, around here everyone deals with mosquitoes to varying degrees but it’s the people who can afford lakeside homes that deal with them the most. Fortunately I am not encumbered with such wealth.

Best of luck to those whom mosquitoes find delicious in Baltimore.

…to make sure those most vulnerable are protected be sure to make this shot mandatory for all pregnant women! Do it for the children!

I agree absolutely. Vaccines ftw! (Removed some unnecessary quotation marks from your post to improve the flow).