I think it’s worse than that, even. Trump doesn’t need the media. All he needs to do is tweet something, and it magically becomes a thing that happened. Look for tweets about Trump fixing health care, proving that global warming isn’t a problem, and granting ponies for all.

The same thing can be said about the ACA. Cory was applauded for pointing out that without it he couldn’t live in the US, but yet I’m suppose to be happy paying higher premiums to fund his healthcare. But I guess healthcare is more important than being about to pay your bills or put food on the table.

RE: Killer Mike, have you seen this?

Brace for MPACT In politics, it is said that there is no such thing as an off-year. Unfortunately, on the American Left, we have failed to live up to that creed. We often find ourselves getting

I can hear this gif. So satisfying.

Maybe Clinton would have won if she had made a whole lot of bullshit promises to the Rust Belt as well, but I rather suspect not.

For the average voter, bullshit promises would work better than nothing. I would prefer honest effort over bullshit platitudes though.

I agree with everyone below–my Republican friend denounced the Chrysler bailout: “You can’t pick winners and losers, etc etc.” But he was crowing about the Carrier deal. There is no reality except ideology for these people. That’s it. 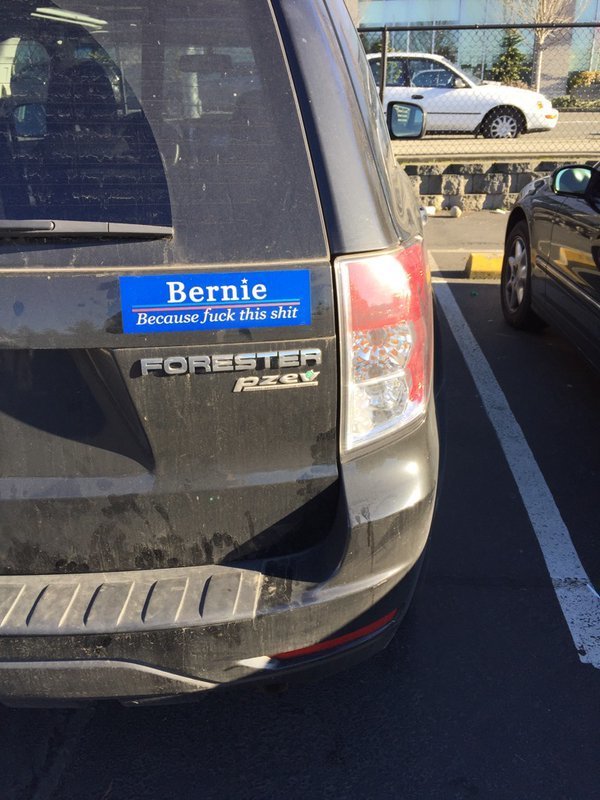 It’s worth noting that NONE of Trump’s taxes were used. Because, well you know.

I wonder in Anthony wonders what that enormous whooshing sound was…either that, or this is the textbook masculo-toxic response to an insult where the insultee decides to take the insult as a compliment…e.g. “You’re a white supremecist!” “Thank you, yes, white people are superior, and I am proud…” 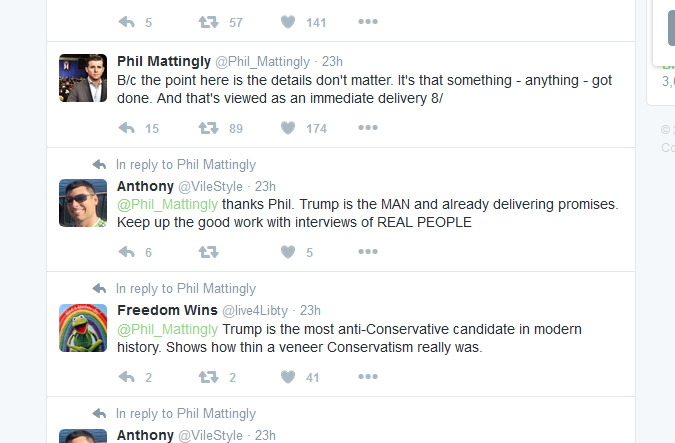 You’re paying higher premiums now, for the exact same coverage you had before the ACA took hold?

Mine is 1/3 of the cost from before, for more coverage. (My old policy wouldn’t cut it under the bare minimum guidelines.)

Or do you work for a large enough company that you’ve always been covered by their group policy, and maybe they’re now making you pay a higher percentage of because they want to lower their personnel expenses? That’s not taxpayer money; that’s corporate profit.

I’m sure the extra penny every decade or two twenty really breaks your back.

Cory was applauded for pointing out that without it he couldn’t live in the US, but yet I’m suppose to be happy paying higher premiums to fund his healthcare.

Yes, you are paying (very) slightly higher premiums to help insure the poor, younger people, and people with preexisting conditions, but those premium increases have many other more significant causes. Annual large premium increases were a persistent and serious problem for a long time before Obamacare existed due to profiteering across virtually every layer of the healthcare system. This is important to keep in mind, since you’re blaming the sick and poor for problems largely caused by the greed of wealthy executives.

Both the Chrysler bailout and the Carrier bailout are bad policy in my view. But then I’m not a Republican.

He’d have been blasted by the right for it,

Obama and Clinton are dead to Republicans

Yeah, all the people who would have voted for Trump anyway would have “blasted him”. So what.

I’m talking about moving a few hundred thousand undecided voters in the midwest.

his GM deal alone kept 1.5M jobs in the country, rather than 800. tRump and Pence (who actually made this deal happen) both loudly denounced both the GM deal and the whole approach that they’re now using.

IMO the auto bailouts were a bad deal too, the bondholders were savaged and the dreadful “cash for clunkers” raised the price of transportation for lower income Americans. Ford seems to have gotten along fine without participating.

Never thought I’d see Palin and Sanders agree with each other! I severely doubt she wrote that, it is way too coherent. Does she have a maverick ghost writer?