I would like to see street view catch someone throwing a pair of sneakers over a phone/power line. That, and bigfoot.

Do you think he’d stay up there?

Does anyone have any information re: this particular art installation (location, etc)?

I used some stock of it for a project recently but didn’t think it would actually exist somewhere. Would love to see it in person.

Gang raids, prostitutes, gang crews asserting their turf, there’s a lot of sad and tragic in those photos.

I have seen it in person! it’s in the Netherlands. unfortunately I can’t remember any more about it than that. but maybe that will point you in the right direction.

Am I the only who who is skeptical about the authenticity of these pictures? Some of them seem too incredible to be genuine Street View screen grabs, and there is no link provided (that I can find) in order to click through to the original page.

Only if you used really strong laces.

I have good news for you! Your comment caught me at lunch time, so I was able to spend some time searching for the source of the image. There is lots of info about that sculpture here: 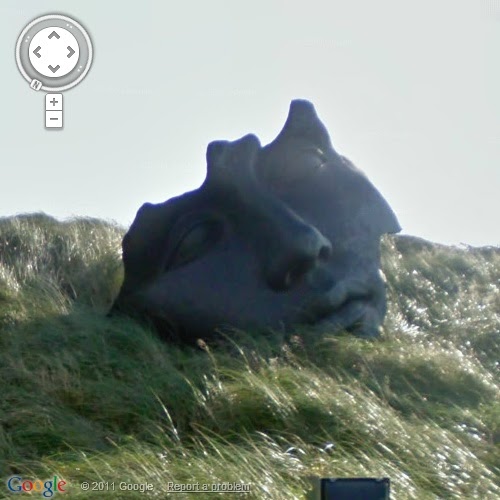 Sculpture By The Sea, The Hague

Google Street View This remarkable artwork on the boulevard at the Scheveningen, the busiest tourist centres of The Hague, Netherlands,...

Which includes references to the Wikipedia article, though I can’t post the link because of Boing Boing’s rules.

Fantastic! My Google Foo was getting me closer, but this is great info! Thanks massive!

Ray Liotta about to pistol whip you, in Streetview

Some seem too good to be true to me as well. I would say the ones with people seem more realistic than the landscape shots. I don’t know why I feel that way though.

A street view car zoomed past me at ~90mph on the NYS thruway a couple weeks ago. I took a photo with my phone to save the location to look for myself later, but they haven’t updated the imagery (if they were even recording, which they probably weren’t).

I bet that with all the driving they do - including going 20+ over the speed limit in notorious speed-trap areas - they must have an outrageous amount of traffic citations, loads of car trouble and crashes, etc. On top of seeing all the worst parts of town and all sorts of weird stuff as in the photos on this blog.

I’d love to have the job as a driver, but… in the one photo here that shows what appears to be the Google driver talking to a police officer, he looks like a stereotypical experienced truck driver; old-ish, round-ish, and bearded. I wonder if the turnover rate for their drivers is high - once one driver has his license suspended for too many violations, they have a large pool of underemployed truckers to recruit from.

Agreed - I was kind of skeptical after some of the more dramatic ones, but the macaques really sent it over the edge. I bet there’s a way to prove if some of these are real - you could map out where the actual location is (or could be) and find the nearest road.

C’mon, this is a perfectly cromulent street view.

You have to remember this is the whole word they have been photographing. Somewhat mind-boggling in its ambition really.

It stands to reason that if you take a picture of every damn street in the world, some of the time you will see an image of something alarming - all the guns fit that for me.

The vast majority of the images are boring old streets which are only of interest to people going there. Occasionally there is an interesting image.

I saw the Google car coming into my neighbourhood, and instantly thought “OH crap, tons of toys and stuff all over the driveway and front lawn”. Rushed home only to have it go by and take a picture of my behind as I frantically picked up toys. Luckily, nobody cares (least of all me). So I left the toys for the kids to pick up.

Sure, they’re photographing the whole world, but what are the chances that one person could find all of this interesting stuff? I don’t believe it until each of the most unbelievable photos has a link where the same picture can be viewed directly on Google Maps.

The whole world, but not all of time.

Er - is there a rule about linking to Wiki that I don’t know about? If not, then what are you talking about? I don’t want to run afoul of the law.